More than 100 flights were cancelled at Barcelona’s Josep Tarradellas-El Prat airport on Monday after thousands of independence supporters blocked access routes in an organized protest against a Supreme Court ruling that sentenced nine separatist leaders to prison terms for the illegal secession attempt of 2017.

Officers from the National Police and the Catalan regional police force, the Mossos d’Esquadra, charged against demonstrators in a bid to reopen road, train and subway access points to the busy travel hub. The Spanish airport authority, Aena, said that flights were cancelled after crews were unable to reach their aircraft. And by 5pm, passengers trying to travel to the city center found themselves waiting in long lines for buses and taxis that were being obstructed by enormous crowds of protesters.

At around 6pm, the police were instructed to clear the area to prevent demonstrators from “violently accessing” the inside of the airport, according to Mossos d’Esquadra sources. Foam bullets were used against the crowd, and emergency services reported treating 56 people, 10 of whom were taken to the hospital. Some protesters hurled objects at the police while others sat down on the pavement. Vueling, Iberia and Air Europa were among the airlines that cancelled flights.

The occupation of the area around the airport was organized by Democratic Tsunami, a grassroots movement with no visible leaders that uses social media to mobilize followers and is looking to the Hong Kong protests for inspiration. The group distributed fake boarding passes and called on demonstrators to use any means possible to get to the airport, even on foot.

Unlike the well-organized airport occupation, street protests in downtown Barcelona were more spontaneous and erratic. When the Supreme Court ruling became known on Monday morning, there were small demonstrations made up mostly of students, retirees and Catalan government workers. Around 50 people blocked the intersection of Gran Via and Passeig de Gràcia, and small scattered groups gathered in other parts of the city center while the police looked on and rerouted traffic.

The protests gained momentum after noon, when around 25,000 people, according to the local police, gathered at Catalunya square. Then, at 1pm, Democratic Tsunami issued its call for followers to descend on El Prat airport. “We’re going to do a Hong Kong!” yelled a youth as the square quickly emptied out.

On Monday night, thousands more marched in downtown Barcelona to protest the Supreme Court ruling. Independence leaders had said that they would only accept a full acquittal for the 12 individuals on trial over their role in the failed breakaway bid. 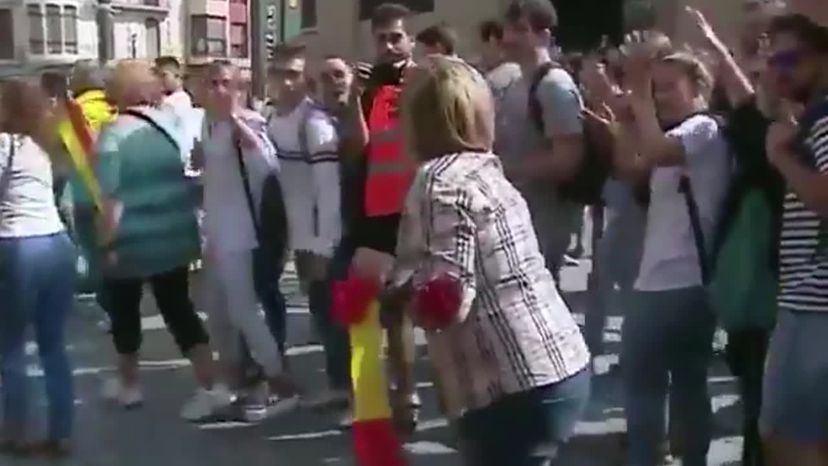 The incident that saw a woman with a Spanish flag punched in the face.

During protests in Tarragona on Monday, a woman bearing a Spanish flag who was confronting supporters of secession was punched in the face. The woman was waving her flag and shouting at demonstrators that they were on “Spanish soil.” At one point, one of the protesters snatched her flag away. She responded by grabbing the man’s backpack, and he spun around and struck her hard in the face. Many of the protesters came to the woman’s aid, while she continued to shout: “You are murderers.” Two police officers assisted her and took her away from the scene. The man was arrested by the National Police on Tuesday for charges including assault. Far-right political party Vox announced on Monday that it would file a police complaint over the incident, given that the woman is a member of the group.

Acting Interior Minister Fernando Grande-Marlaska said on Tuesday that there would be an investigation into who is behind Tsunami Democràtic, the grassroots group with no visible leaders that organized the protests yesterday at Barcelona’s El Prat airport.

“Of course there are investigations, we have efficient intelligence services and we will end up knowing who is behind these actions by Tsunami Democràtic,” the interior chief said.

Grande-Marlaska, of the Socialist Party (PSOE), also echoed the acting prime minister’s statement on Monday that there would be no government pardons for the convicted Catalan independence leaders.