A man lost an eye during the police clashes with pro-independence protesters in Barcelona’s Josep Tarradellas-El Prat airport on Monday. The victim was admitted to the Bellvitge Hospital with “multiple facial injuries,” and was reportedly awaiting surgery. According to the hospital, the injury is consistent with the impact of a rubber bullet, which are used by the National Police, but could also have been caused by a foam bullet, which are used by the Catalan regional police force, the Mossos d’Esquadra.

Officers from both forces charged against demonstrators after thousands of independence supporters blocked access routes to the airport on Monday night in an organized protest against a Supreme Court ruling that sentenced nine separatist leaders to prison terms for the unilateral secession attempt of 2017.

The emergency services attended to 131 people who were injured in the clashes, 24 of whom needed to be taken to hospital. Another 16 people required medical attention across Catalonia.

During the charges, the Catalan riot police used foam bullets, a precision weapon that is not fired at the ground, while the National Police were using rubber bullets, which should be fired at the ground and then bounce toward their target, in a less precise way than the foam bullets. The Catalan regional parliament banned the regional police from using rubber bullets because of their potential to cause injury. Rubber bullets are, however, used across Spain by the National Police and the Civil Guard.

Lawyers from the human rights firm Iridia say that at least six of the 131 people injured in the police charges were hit by either a rubber or foam bullet, according to Spanish news agency EFE. As well as the victim who lost an eye, the lawyers say another person was hit very close to the eye area. Several journalists also reported on social media that they had been injured in the police charges.

The minister of the premiership of Catalonia, Meritxell Budó, justified the “isolated” police charges, arguing they were aimed at “protecting the demonstrators.” In an interview with the Catalan radio station RAC 1, Budó said “sometimes these actions have to be carried out to refrain from other actions that could be worse.”

This is not the first time a protester has suffered an injury like this one in police clashes in Catalonia. On November 14, 2012, Ester Quintana was wounded in a general strike when she was hit by a rubber bullet fired by Catalan riot police, and subsequently lost one of her eyes. 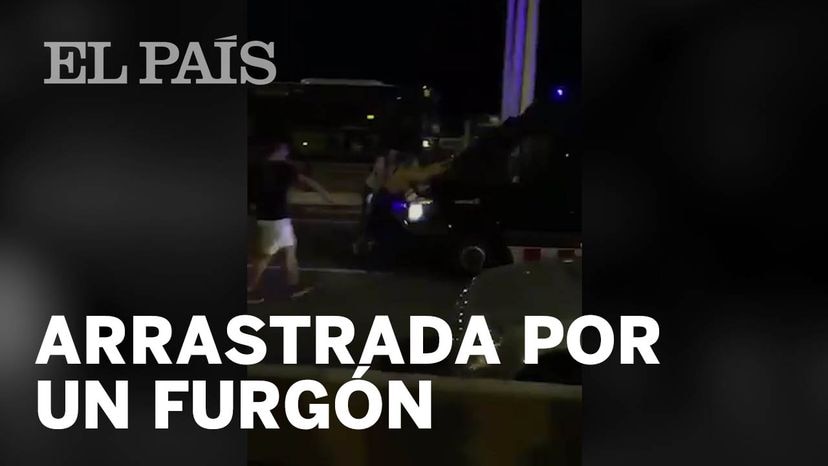 A video of the incident involving a riot van (Spanish captions).

Meanwhile, the Catalan regional interior department will investigate the actions of Mossos d’Esquadra riot police on Monday during the disturbances at El Prat. A video (above) shows a police van in motion while two demonstrators are on the hood of the vehicle. In an internal report, to which Spanish news agency EFE has had access, the department has decided to analyze the images of the incident to “determine eventual responsibilities, in accordance with the protocols of police procedures.”