Heavy rainfall on Wednesday caused flooding in parts of central and eastern Spain. The provinces of Tarragona, Castellón and Toledo were particularly affected by the storms, while in Madrid the rising waters flooded homes and created significant traffic disruption.

On Thursday, parts of mainland Spain as well as the Balearic Islands were on the national weather agency Aemet’s yellow alert level for rain and thunderstorms.

Two German tourists, ages 23 and 25, drowned after going swimming late at night in dangerous water conditions in Cala Mandia, part of the municipality of Manacor on the island of Mallorca.

Train services were still affected on Thursday. At 5pm, the railway company Renfe was reporting interruptions on the high-speed Madrid-Toledo line between the stations of La Sagra and Toledo, as well as additional disruptions on the Tarancón-Huete line (between Aranjuez and Cuenca) and the Teruel-Zaragoza line (at Cariñena).

In Catalonia, weather stations recorded rainfall of 77mm in just 30 minutes. The heavy rain triggered flash floods on city streets and damaged ground-floor properties in municipalities of the Montsià and Baix Ebre areas of Tarragona province. In the small coastal town of Alcanar (population 9,300), record precipitation caused flash floods that dragged vehicles out to sea. On Wednesday the town recorded rainfall of 252mm in three hours, more than half what this location normally gets in an entire year.

Serious damage to property was also reported at a campsite named Els Alfacs, located south of Sant Carles de la Ràpita, in Tarragona province. Facility director Mario Gianni Masià said he had “never, ever, ever seen anything like it, the fury of the waters was striking.” Masià added that the rain began suddenly and intensely, and kept on falling. The fence separating the campsite from the adjacent road gave way and the water flowed inside, taking two cars and “the odd caravan” out to sea.

In Ulldecona, a village located further inland, 500 people had to be evacuated from an industrial park after access roads were cut off by the rain. A dozen other individuals were rescued from homes and fields by the local firefighting service.

The Catalan government on Thursday announced aid for affected municipalities in Tarragona and said it might declare a disaster area, which would make towns eligible for additional resources.

In the Valencia region’s northernmost province of Castellón, firefighters were called out to rescue drivers from vehicles on the N-238 road between Vinaròs and Ulldecona. “It happened in just two minutes,” said Juan Ciudad, one of the rescued motorists. “We were scared. The water kept rising and my husband has just been through surgery,” explained Conchita Rollad, who had been planning to start her vacation on Wednesday. She and four other people were carried to safety inside an excavator’s shovel.

In the central region of Castilla-La Mancha, rain flooded the TO-23 road near Toledo’s General Hospital and damaged numerous vehicles, according to the DGT Spanish traffic authority. Numerous business premises in the city had to close at around 3pm due to the heavy rainfall. “Suddenly, a small ceiling leak inside the warehouse turned into rivers of water and mud,” said Ana Isabel Vinuesa, owner of the Gredos café on Santa Bárbara avenue. “I started to scream for help out the window, and asked for buckets. There was a moment when I felt so helpless that all I could do was sit down and cry.” 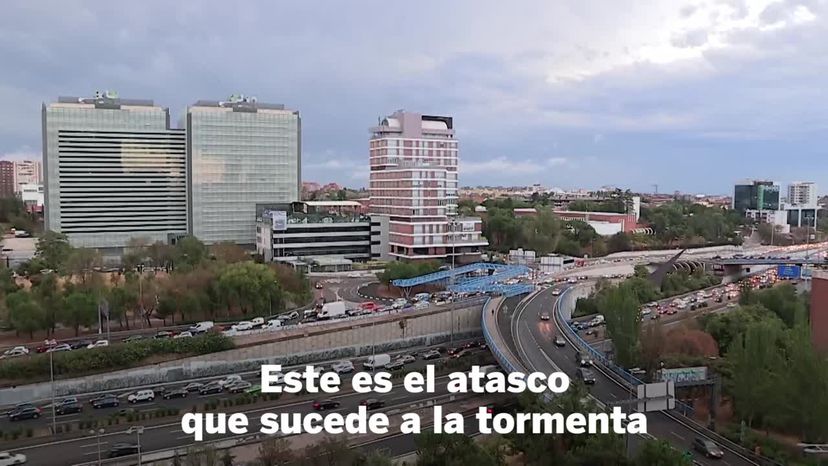 Traffic jams, crashes, flooding and cuts to public transportation were reported in Madrid.EPV

In Guadamur, near Toledo, a flash flood dragged away cars, damaged roads and covered the streets of the town with mud, uprooted trees, rocks and other debris. María del Sagrario Gutiérrez, who has been the mayor for the last 24 years, was in tears as she talked about 200 damaged homes. “For a village of 1,800 residents, what took 15 years to build was destroyed in an hour. I was born here and I’d never seen anything like it.”

In the Madrid region, the emergency services processed 237 storm-related events and firefighters made 50 trips involving flooded homes and pockets of water on roads. Outside the capital, there were numerous calls from Alpedrete, Valdemoro, Parla, Fuenlabrada and Rivas-Vaciamadrid. The rainfall flooded underpasses and interrupted service on commuter train lines and on the Metro subway system.

Aemet spokesperson Rubén del Campo said that August 31 has been the second rainiest day in August for Madrid since 1920, only surpassed by another August day in 1947.