Spain is in for a congressional cliffhanger today, as lawmakers assemble for the second round of the investiture vote to confirm the caretaker prime minister, Pedro Sánchez of the Socialist Party (PSOE), in his post.

Never before in the history of Spanish democracy have the margins been so tight: Sánchez is expected to win by a simple majority of just two more “yes” than “no” votes. His PSOE predecessor José Luis Rodríguez Zapatero was confirmed in office by a lead of 11 votes in 2008, and in 1989 Felipe González won by 12 votes.

After losing the first round of the vote on Sunday, Sánchez is expecting a victory today thanks to the abstention of the 13 lawmakers for the Catalan Republican Left (ERC), a separatist party that has negotiated the opening of talks on the “political conflict” in the northeastern Spanish region in return for its indirect support.

The Socialist Party leader, who is planning to head a leftist coalition government with Unidas Podemos, has also secured endorsement from several small regional parties with congressional representation. Some of these lawmakers have reported being subjected to tremendous social pressure in recent days from opponents of a PSOE-Podemos administration.

If Sánchez is successful, he will head the first coalition government since the days of the Second Republic

The sole representative for Teruel Existe, Tomás Guitarte, had received 8,800 messages in his congressional email account on Sunday asking him to vote no on Tuesday, and his Facebook page is filled with insults over what critics are calling his “betrayal” of Spain. Guitarte has filed a complaint for threats that have appeared via graffiti in his home town, calling him a “traitor” for voting in favor of Sánchez’s investiture, according to a party spokesperon.

The party says there is no chance that Guitarte will switch allegiances on Tuesday. “They’ve focused on us because they think that being a citizen movement makes us more fragile, but it’s the other way around,” said a spokesperson for Teruel Existe, a party that was born out of a citizen movement aimed at drawing attention to the lack of funding and investment in the province of Teruel, in the region of Aragón. “It is very difficult for a group of citizens to make it into Congress. We are not here to advance political careers, but to solve the problems of the depopulated areas of Spain. Nobody can buy us off.”

But the fact remains that if any lawmaker who has pledged support were to back out, or simply fail to show up in time for the vote, it would effectively end Sánchez’s bid for confirmation in office.

PSOE leaders are so worried about this possibility that they have been contacting their congressional representatives to make sure that they would be spending Monday night in Madrid, physically close to the lower house of parliament, to avoid possible delays due to traffic or other such reasons.

Sánchez has been trying to form a government since the general election of April 2019, and again after the repeat election in November, where he won the most seats but fell short of an absolute majority. In the meantime, the far-right Vox party surged to become the third-largest force in Congress, prompting Sánchez and Unidas Podemos leader Pablo Iglesias to clinch a leftist coalition deal that still falls short of the 176 seats required for an absolute majority in Spain’s lower house.

The difficulties faced by Sánchez reflect the new political fragmentation in Spain, where new parties emerged on the back of the economic crisis, breaking the traditional two-party rule by the PSOE and the conservative Popular Party (PP). Spaniards have voted in general elections four times since 2015, and could be facing a fresh vote if no government emerges from today’s congressional session, which began at 12pm.

If Sánchez is successful, he will head the first coalition government in Spain since the days of the Second Republic (1931-1939). Sources at La Moncloa, the seat of government, said that he could be sworn in and appoint his Cabinet as early as Wednesday.

The investiture debate to confirm Pedro Sánchez in office began at the weekend, when there were angry scenes inside the lower house of parliament. One of the most tense moments took place on Sunday, when Mertxe Aizpurua, a representative for the Basque far-left party EH Bildu, took the podium. Her address triggered constant jeers from the right-of-center PP, Ciudadanos (Citizens) and Vox, who told Aizpurua that her party"s hands are "stained with blood," a reminder that EH Bildu has its roots in parties that were once connected to now-disbanded terrorist group ETA.

On two occasions, congressional speaker Meritxell Batet told the house to respect Aizpurua’s right to express herself, and PSOE lawmakers applauded Batet’s remarks. But Vox has since shared a 10-second video on social media that alleges that the Socialists were applauding the EH Bildu lawmaker instead. The PP has also shared the video, and Ciudadanos has commented on it. 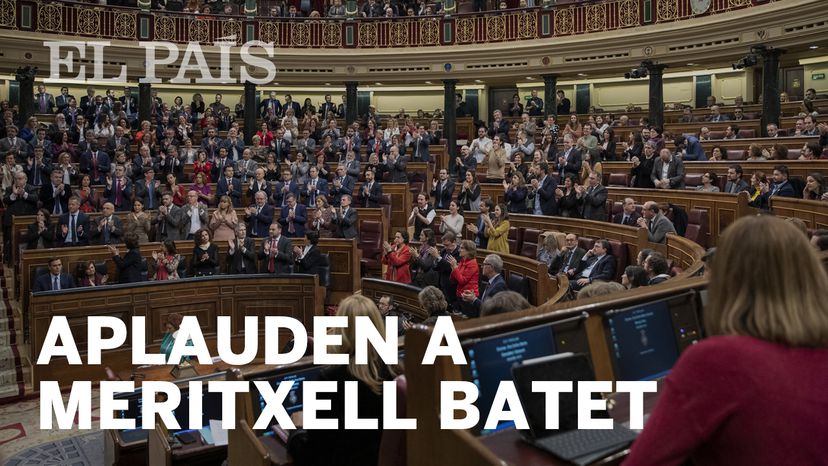 Socialist Party deputies applaud speaker Meritxell Batet. An edited version of this video has been distributed by the PP and Vox accusing the Socialists of applauding a deputy from the Basque parte EH Bildu (Spanish captions).