Spain will not break up; there will be dialogue to deal with the “political conflict” with Catalonia, without straying beyond the confines of the Spanish Constitution; and a coalition government made up of the Socialist Party (PSOE) and Unidas Podemos will implement reformist policies that will cast aside measures from previous administrations with regard to the economy, employment and personal freedoms. Those were some of the commitments set out on Saturday by caretaker Prime Minister Pedro Sánchez, as he addressed Spain’s lower house of parliament, the Congress of Deputies, on the first day of his investiture debate.

The coalition government proposed by Sánchez was put to a first vote on Sunday, after two days of debate in Congress during which opposition parties responded to the policies and plans set out by both the caretaker prime minister and the leader of Unidas Podemos, Pablo Iglesias. As expected, Sánchez’s bid did not prosper at that first vote, given that he required an absolute majority of 176 votes in the 350-seat chamber.

Judging by the tone of the debate this weekend, the future coalition government can expect fierce opposition from other parties in Congress

At a second vote on Tuesday, however, Sánchez is expected to win the poll, given that a simple majority of more yes votes than no is required. Sánchez has the support of the aforementioned smaller parties, but most importantly, he has secured the abstention of the ERC thanks to a deal covering the future approach by the central government to the issue of Catalan independence. If just two deputies fail to vote the way that is expected on Tuesday, Sánchez’s bid could fail once more.

Judging by the tone of the debate this weekend, the future coalition government can expect fierce opposition from other parties in Congress. The leader of the conservative Popular Party, Pablo Casado, yesterday accused Sánchez of destroying national sovereignty thanks to his agreement with the ERC. Never before had the “defense of the homeland” been such a topic of debate in Congress, an issue that was also taken up by far-right Vox and center-right Ciudadanos.

Sánchez, however, insisted that the predictions of these right-wing parties would not come to pass. “Spain is not going to break up and the Constitution will not be violated,” he told the assembled deputies. “What is going to be broken is the blocking of the progressive government that was voted for democratically by Spaniards.”

Sánchez won the November 10 repeat election but, as at the previous vote in April, fell short of an absolute majority. Since the polls last fall he has been seeking the support of other parties to be voted back in to office. Sánchez quickly closed a coalition deal with Unidas Podemos, but talks with ERC have been long and arduous, and of course have been complicated by the fact that the party’s leader, Oriol Junqueras, is currently in jail for his role in the 2017 Catalan independence drive.

The text of the deal between the PSOE and ERC sets out a forum with no restrictions on the content of discussions, set to begin 15 days after the new government is formed. Any deals reached, according to the text, will be subject to a vote by citizens of Catalonia. The presence of the Spanish prime minister and the Catalan regional premier at the talks will not be essential, according to the agreement. The text avoids making specific reference to the Constitution, although it does state that any possible deal will have to comply with "the framework of the legal-political system."

During the debate on Saturday, the PP leader Pablo Casado adopted a more hard-line tone than that seen during the last election campaign – and this, despite the fact that a shift to the right ahead of the April polls saw the conservative party fare dismally, securing its worst result in its history. Comparisons with the discourse of the leader of far-right Vox, Santiago Abascal, were inevitable.

The defense of the homeland and who loves Spain more were a thread that nearly all of those who spoke during the debate adopted. The PSOE’s deal with ERC, which is still yet to be explained in detail, inspired speeches about the dismemberment of Spain, which were countered by Sánchez, the leaders of Unidas Podemos, Pablo Iglesias and Alberto Garzón, and other left-wing groups.

Tomás Guitarte, a newcomer in Congress representing regional party Teruel Existe, confessed to his shock and concern regarding the speeches he had heard on Saturday. He also denounced the fact that he was suffering an unexpected level of pressure and criticism for supporting Sánchez. The caretaker prime minister thanked him for his “bravery” and the PSOE deputies gave him a long round of applause.

The defense of the homeland, and who loves Spain more, were a thread that nearly all of those who spoke during the debate adopted

Sánchez spoke about other issues than just Catalonia, but it was this issue on which Casado focused all of his attention. “You have lost the dignity of leading a party that supports the Constitution and you also have lost your decency,” the PP chief stated. He threatened Sánchez with legal action should he not back the immediate disqualification from office of Catalan regional premier Quim Torra, who was recently found guilty of disobedience for refusing to obey an order to remove separatist symbols from public buildings in the region.

If Torra is not removed from office, Casado continued, Sánchez should “implement Article 155 of the Constitution” via the Senate. This measure, which was put into action in 2017 in the wake of the Catalan independence drive, would see regional powers suspended in Catalonia and the central government in Madrid take charge.

Casado’s attacks on Sánchez bordered on the personal, accusing him of being a “sociopath” and also calling him a “walking lie.” He continued saying that the caretaker prime minister was “the leader of those who want to finish with constitutional Spain,” saying that “communists, populists” and Basque radicals were among his number.

“You do not understand Spain,” was the reply to the right-wing politicians of Unidas Podemos leader Pablo Iglesias, who is due to become deputy prime minister should the investiture vote be successful on Tuesday. With a serious tone, but without raising his voice, Iglesias announced that the task of the new government would be to “defend Spain from the betrayals of the right.”

The second day of the debate began on Sunday with moments of great tension, as the spokesperson from EH Bildu, Mertxe Aizpurua, made her speech. Her party, the name of which means Basque Country Unite, is a leftist group that is in favor of independence for the northern Spanish region, and has its roots in parties that were once connected to now-disbanded terrorist group ETA, which killed nearly a thousand people during its decades-long campaign for an independent Basque Country.

Aizpurua set out to explain her party’s position of “active abstention” at the investiture vote, but was interrupted by deputies from the start. The jeers were prompted when the deputy began to criticize the televised speech made by King Felipe VI on October 3, 2017 in the wake of the illegal referendum on independence in Catalonia. Aizpurua said that this intervention by the Spanish monarch was evidence of an “authoritarian” state. 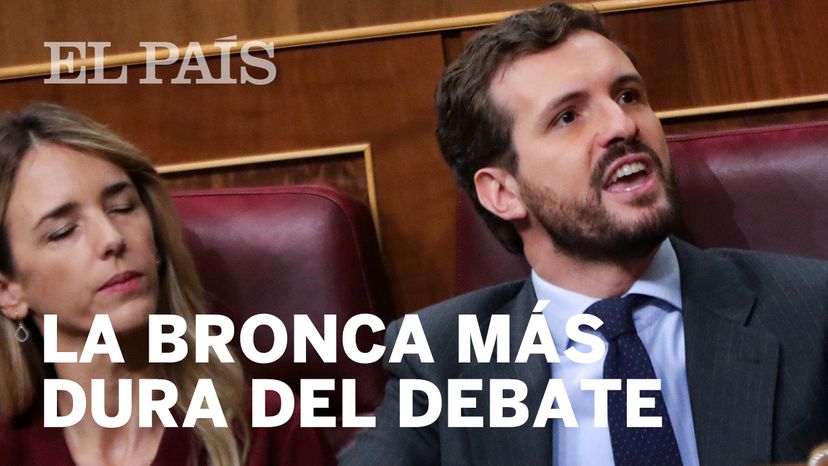 From that moment on, deputies from the PP and Vox benches began to shout “murderers,” “shame,” and “ask for forgiveness” at the EH Bildu politician. The general secretary of Vox, Macarena Olona, shouted: “You have your hands stained with blood, we won’t forget, we won’t whitewash.”

Vox leader Santiago Abascal, meanwhile, left the chamber and stood with deputies from his party whose family members were victims of ETA. PP politician Adolfo Suárez Illana, who is the son of former Spanish Prime Minister Adolfo Suárez, turned his back on Aizpurua while she was at the stand.

Ciudadanos politician Edmundo Val was among the deputies who demanded that the speaker of Congress, Meritxell Batet, take action to censure Aizpurua. Val went so far as to conclude that Aizpurua has called the king a “fascist,” but the EH Bildu deputy shook her head in denial from her seat and was backed by the transcript of her own words.

Aizpurua later denounced the insults she received in Congress. “This country needs a lot of education about democracy and a lot of anti-fascist education, and what happened today is a good example of that,” she said. “Freedom of expression should prevail over such grievances. We will analyze what happened and evaluate the measures that should be taken.”

How Spain got here

The outcome of this first-round investiture vote had been widely expected as Pedro Sánchez did not have enough parliamentary support for an absolute majority of 176 seats going into the vote. Instead, the Socialist leader has negotiated an abstention from a regional party at the second round, which is scheduled for Tuesday and will only require a simple majority of more yes than no votes.

Securing this indirect backing from the Catalan Republican Party (ERC), a separatist political force whose leader Oriol Junqueras is serving a prison sentence for his role in the 2017 unilateral secession attempt, has required lengthy negotiations and a pledge to open talks between the central and regional governments over what is termed as the "political conflict" in Catalonia.

If, as expected, the 13 ERC lawmakers sitting in Spanish Congress abstain on Tuesday, Sánchez will announce his Cabinet appointments in what is to be Spain"s first coalition government since the transition to democracy in the late 1970s. The leftist alliance between the PSOE and the anti-austerity Unidas Podemos, which had once seemed improbable, was reached in record time after the inconclusive election in November, when the far-right Vox party surged to become the third-largest force in parliament.

But the larger, right-of-center Popular Party (PP) and Ciudadanos (Citizens) have consistently refused to endorse a Sánchez administration while criticizing the latter for turning to Catalan separatists for support.