In the south of Spain, lie the remains of an ancient Roman city. Virtus Iulia, as it was likely to have been called, was built between 30 and 27 BC in Ituci, a fortified settlement made by pre-Roman people known as Turdentani. After more than 30 years of research, it is now known that Virtus Iulia had huge city gates, a market, baths and a forum, which was adorned with sculptures of figures such as the Roman emperors Augustus, Livia and Caligula, whose face was replaced by that of Emperor Claudius when he succeeded him – all now on show at the Baena Historical and Archaeological Museum in the southern Spanish province of Córdoba.

Thanks to excavation work from experts at the universities of Córdoba and Granada, it was discovered last summer that the city also had a 70-meter long amphitheater, which was used as a venue for entertainment including gladiator fights and wrestling with wild beasts. 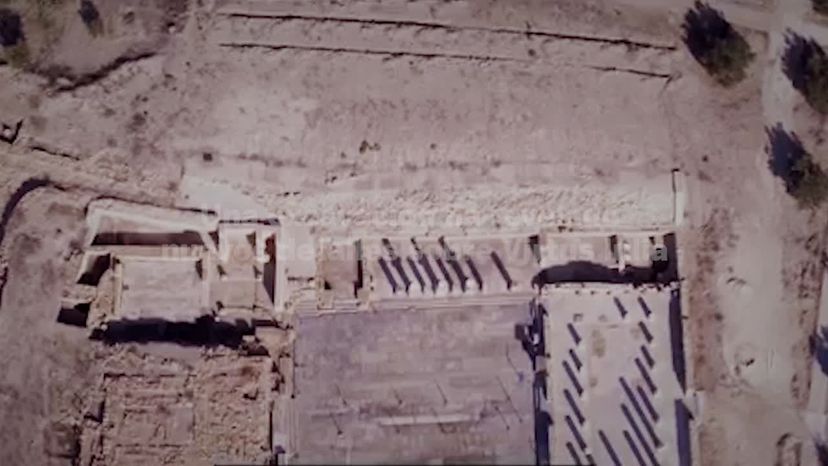 The new study titled Use of Remote Sensing, Geophysical Techniques and Archaeological Excavations to Define the Roman Amphitheater of Torreparedones, undertaken by archaeologist Antonio Monterroso-Checa and six other experts, explains that the latest excavation, involving the digging of six trenches to define the outer limits of the building, confirmed the results obtained two years ago using the so-called Lidar system – laser remote sensing – which had shown the existence of a large structure of ashlars 10 meters deep.

The study also reports that the amphitheater was outside the city walls. Covering around 11 hectares, only 10% of which has been excavated, Virtus Iulia was built on a 580-meter hill and was “distributed in terraces following the topography of the land.” There was also a network of streets crossing the city with a main road leading to the amphitheater, making it easy for spectators to get to the site and see their favorite gladiators – the remains of a gladiator helmet were found in the latest excavation. The dimensions of the amphitheater are similar to those in other archaeological sites in Spain such as the Contributa Iulia in the town of Medina de las Torres in Badajoz province, and the Segóbriga, located in the municipality of Saelices in Cuenca, whose cities were of similar size to Virtus Iulia.

The Torreparedones archeological site – where Virtus Iulia is located – was first excavated in 1987. Work stopped in 1999 but resumed in 2006. Directing the site today is José Antonio Morena, who has established three distinct historical periods – the Iberian, which includes a wall from 6th century BC and a sanctuary where hundreds of offerings dedicated to the goddess Dea Caelestis were found; the Roman, which is represented by the city of Virtus Iulia; and the Medieval, attested to by castle ruins.

According to Carlos Márquez, professor of Archaeology at the University of Córdoba and director of the Torreparedones research group, the remains from the Roman period include three complexes – the forum with its assembly room (curia), basilica, temple and porticoes; the market surrounded by 13 shops and the amphitheater which lay beyond the city walls – all of which was granted cultural heritage protection (BIC) in 2007.

The conservation of some of the buildings is exceptional, such as the public baths located by the eastern gate, which were excavated and studied by Spanish archaeologist Ángel Ventura. The baths cover around 500 square meters and have three-meter high walls reaching almost to the roof. Rectangular in shape, there is still evidence of changing rooms, a cold room, a warm room and a hot room as well as latrines, a hall and service area, and ovens to heat the floor.

“Just as important as the complex itself are the artifacts linked to the Roman goddess Salus that have been located, including an inscription dedicated to her to a small bronze vase bearing her image,” says Márquez.

While visitors are not currently allowed to the site due to the coronavirus lockdown, they can download the cellphone and tablet app Ciclo Escultórico de Torreparedones (Torreparedones Sculpture Route), which provides a virtual tour around the main buildings and offers a view of everything from the inscription to Roman consul Marcus Iunius Marcellus, who paid for the paving of the forum, to a 3D look at the enormous statues of the emperors found there.

Not yet on show are the newly discovered amphitheater and a theater that laser images appear to have detected. Antonio Monterroso-Checa’s report states that this last theater has been located inside the walls. “Further excavations will have to be undertaken to confirm this,” says a cautious Márquez. “But it’s almost certain.”