Under the beating July sun, the newly inaugurated pavilion-style entrance at Madrid’s freshly renovated Gran Vía Metro station stands like a gateway welcoming people to the Spanish capital. The construction is a replica of the former entrance, built in 1917 by architect Antonio Palacios, and it is faithful to the original design. The granite used for the structure is so clean and blemish-free that it almost looks unreal.

The refurbished Metro station was inaugurated on Thursday by the regional premier, Isabel Díaz Ayuso, after nearly three years of delayed works that finally ended. The Gran Vía station did not, however, reopen to passengers until 6am on Friday, finally welcoming back the 66,000 people expected to travel through the station on a daily basis, and who will now be able to take advantage of a passageway leading directly to the nearby Sol station, home to both Metro and Cercanías commuter train lines. According to a spokesperson, not until yesterday had all of the final testing been completed by Madrid Metro employees.

The new image of the station will be further enhanced by four new elevators, 13 escalators, voice-recognition functions at ticket-vending machines, and a museum space exhibiting the treasures that were discovered during the renovation work.

The eagerness felt by Madrileños for the work to be completed could perhaps be compared with that of Catalans to see the Sagrada Familia basilica finally finished. Three friends from an acting class are walking by, sodas in hand, and come to a sudden halt. “Wow! I hadn’t seen it finished!” exclaims Demi Ferrá, who seems the most excited. “The sidewalk seemed much smaller with all the work. It looks elegant and stately.” “It’s a miracle! It’s about time,” adds Ana Megía. “I don’t understand why it took so long.” Joseba Goyeneche, meanwhile, has words of appreciation for the protruding roof of the new pavilion. “This offers great shade and will also be good for the rain,” he observes. “Now we just have to see how long they take with the Plaza de España…” All three burst out laughing on hearing his reference to the ongoing work at the nearby iconic city square.

Once you have taken the escalator, the first thing you see is a giant screen that will be used for advertising. Then the 17 new turnstiles, which are narrower and longer to fit more in the space, before you come upon a scene that looks like something out of the classic sci-fi movie Blade Runner. Neon lights like laser beams are emitted from the gates that lead to the train platforms. When they shine blue, users must present their travel pass. When they’re red, that means something has gone wrong, and green means you can pass.

For those looking to buy a ticket or pass, they will find a kind of huge tablet instead of the old machines. They are tactile but can also be controlled by voice. This is technology 4.0 and futuristic modernity for a key station in the heart of Madrid, and came at a cost of €10.7 million in total. The feeling of space is also notable: the usable area has increased from 900 to 2,000 square meters.

The second intermediate floor is where passengers and visitors will find the small museum, featuring the archeological finds that turned up during the work. Carlos Zorita, head of infrastructure at Madrid Metro, explains that they expected to discover the Antonio Palacios-designed elevator at some point – and that’s exactly what happened.

But what they didn’t expect to find was an original shield of Madrid, featuring the city’s bear and strawberry tree logo, made out of tile with a metal finish. They also found a storage room, and on display are the broken jars that were rescued as well as coins from the era. The workers even came across advertising that used to be placed on the steps – one reads: “Torres Muñoz Bicarbonate Soap.”

For many Madrileños, the end of the construction work could not come too soon. Nacho Segovia, 32, works at the McDonald’s fast-food restaurant next door. He says that the noise has been unbearable. “And so much dust came in,” he explains. “In fact it’s still coming in because yesterday they were cutting tiles.” He runs a finger along one of the doors to prove it. He lives in Aluche and used to be able to take a direct Metro train to Gran Vía. While the station was closed he had to travel instead to Tribunal or Sol and walk the rest of the way, taking considerably more time.

The sidewalk seating that once existed outside this McDonald’s had to be removed, which had a negative effect on business, Segovia explains. He has been able to observe the slow progress of the work in real time, and would also quiz the construction workers about the project when they came to his restaurant. “They warned us that it was going to take longer than normal,” he explains. “I saw that the escalators, given that they were so big and so long, had to be separated and inserted through the hole where the elevator is now,” he explains, while finishing his last cigarette before starting his shift. 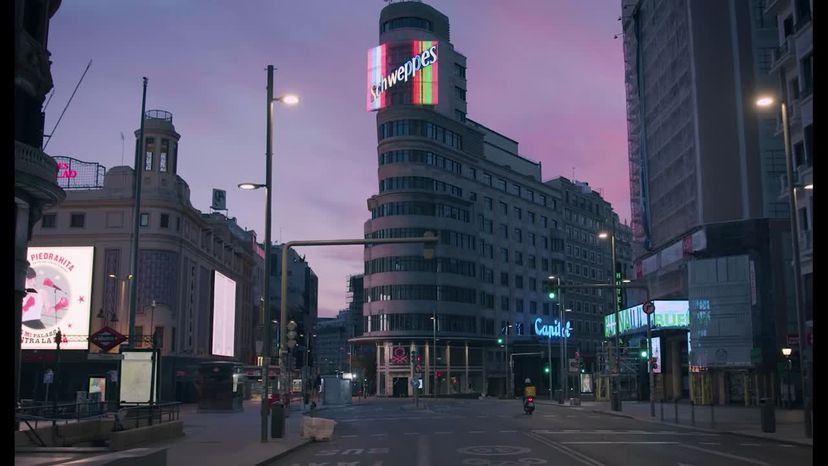