The SARS-CoV-2 virus continues to spread in Spain. In the 40 days since the end of the state of alarm, the number of coronavirus cases has risen eightfold, jumping from 334 on June 20 to 2,789 between July 29 and 30.

In a bid to curb contagion, several Spanish regions have reintroduced partial lockdown measures and placed restrictions on nighttime venues, which have been linked to several Covid-19 outbreaks. The latest measure was introduced on Saturday, when a court in Valladolid province authorized the order from the Castilla y León regional government to confine 10,000 residents of the towns of Íscar and Pedrajas de San Esteban for 14 days due to a surge in cases.

Health Minister Salvador Illa used the words of his Italian counterpart, Robert Speranza, to describe the current situation: “We are out of the storm, but we still haven’t arrived at a safe port.”

During the peak of the pandemic in March and April, Spain recorded more than 8,000 new coronavirus infections a day – despite the fact that only the most serious cases were being tested. Half of the 200,000 cases diagnosed up until May were admitted into hospital.

Now, nearly 300,000 tests are being done every week in Spain – double the number from three months ago. According to the latest figures released on Friday, more than 14,000 infections were detected in the previous seven days, and of this number, less than 10% were admitted into hospital. What’s more, 60% of cases are now asymptomatic – a figure that was unknown three months ago due to the restrictions on testing. As a primary healthcare doctor explains: “During the first few weeks [of the pandemic], people with mild symptoms were asked to self-isolate in their homes, but they did not receive PCR tests [the slowest but most reliable diagnostic tool].”

On April 1, at the height of the pandemic, Spain recorded more than 950 coronavirus fatalities in one day. Now, the country’s 17 regions are reporting fewer than 10 daily deaths. The Health Ministry maintains that, according to its calculation, there are fewer than 10 deaths a week.

During the peak of the pandemic, the intensive care units (ICUs) of hospitals in some regions (mainly Madrid and Catalonia) had to double and triple their capacity to deal with the number of Covid-19 patients, with nearly 3,000 patients in the ICU. Now, that figure has fallen to 250. At one point, there were more than 30,000 people hospitalized across Spain; today, there are only around 2,000.

Now the detection of cases has improved a lot, there are more resources, we know what we are facing and we have certain measures to avoid transmission
Epidemiologist Alberto García-Basteiro

But according to Illa, “there is no area with uncontrolled transmission.” “The most worrying outbreaks in Zaragoza and Barcelona are in the control phase,” he told Spain’s Congress of Deputies last Thursday.

Epidemiologist Alberto García-Basteiro, a researcher at the Barcelona Global Health Institute, admits that the contagion rate in Aragón and Catalonia are worrying, but says drastic conclusions cannot be reached just by comparing the data from three months ago at the peak of the crisis. “Now the detection of cases has improved a lot, there are more resources, we know what we are facing, and we have certain measures to avoid transmission,” he says. “If we had had the detection capacity and the level of alert that we have now, the curve of infections could possibly be completely different. The transmission that reflects the same cases diagnosed now and in April is very different.”

An intensive care doctor who works in a region which has seen a large spike in cases says that the situation is calm and under control for now. The hospital where he works went from having 300 Covid-19 patients, to having none in June. In recent days, admissions have begun to rise with a dozen cases in hospital wards and one in the ICU. “The cases that are coming in are less serious than three months ago; the patients are younger, although we do have one who is over 80,” says this source. “We are better prepared, we have a better understanding of the medical treatment that has the most benefits for the patients, and we are not using the same personal protective equipment three days in a row, like we did before, meaning there is less risk of contagion among health workers.”

According to the latest epidemiological study from the Carlos III Health Institute, 35,482 Covid-19 cases were diagnosed between May 10 and July 19. Of this figure, only 7% (2,480 patients) required hospitalization. In this period, 228 people died from the virus, representing 0.65% of all cases.

The overall case fatality rate in Spain, which compares the number of diagnosed cases (288,522) to the number of deaths where the victims tested positive for Covid-19 (28,455), is nearly 10% – one of the highest in Europe. But epidemiologist García-Basteiro believes the real figure is much lower, explaining that it has been distorted due to the lack of testing. “We know that the fatality rate, if we are able to diagnose absolutely all cases, is relatively low. If we apply the case fatality rate only to serious cases, those which arrived in hospital during March and April, and those which were diagnosed, the rate will be higher,” he says.

Health Minister Illa says that most infections are happening in family gatherings and nighttime venues. “It’s very difficult in an indoor bar, in the middle of the night, to be wearing a mask,” he explained. 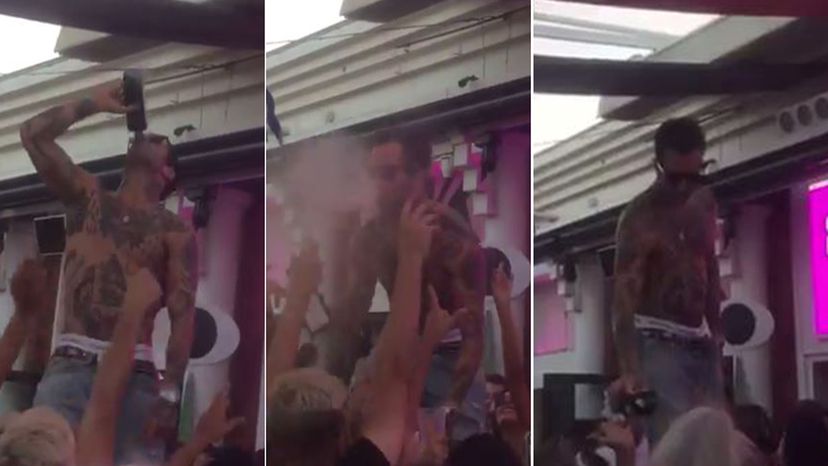 Police have opened an investigation into a DJ caught on video spitting alcohol onto the crowd.

In the southern region of Andalusia, police have opened an investigation into a DJ who was caught on video on Saturday taking a swig from a bottle of Jägermeister and then spitting over people dancing at a party in Torremolinos in Málaga. The province of Málaga currently has 14 coronavirus outbreaks and 130 cases, while Andalusia has 71 outbreaks and 856 infections.

According to the Health Ministry, imported cases are not a significant risk. “Between July 22 and 28, we have only detected 143 imported cases,” said Illa. This represents 1% of the total. “In the Madrid region, 7,000 cases have been detected since May 11 and the number of imported contagions is less than 100. For now, we don’t have a problem, which does not mean to say we can’t act tomorrow.”

Differences between the regions

Madrid and the neighboring regions of Castilla-La Mancha and Castilla y León were three of the areas hardest hit by the coronavirus in Spain. Yet these regions have not seen the same dramatic spike in cases since the end of the state of alarm. The contagion rate has remained virtually unchanged in Castilla-La Mancha and Castilla y León, while Madrid has only recently reported a rise in infections. Even still, the 14-day cumulative incidence of coronavirus in Madrid – 44.68 cases per 100,000 inhabitants – is one fourth of the rate in Catalonia.

Epidemiologist García-Basteiro cannot explain why this is the case, but points out that face masks were more widely used in Madrid than in Catalonia, before the measure became mandatory in all public spaces. “If 90% of those who live in Madrid are wearing a face mask and in Catalonia the percentage is lower, it is possible that the level of awareness, of respect for the recommended measures, explains some of the differences, but not all of them,” he says.