The Spanish government of Prime Minister Mariano Rajoy is set to meet on Saturday to study the application of Article 155 in Catalonia – which would see elements of Catalonia’s autonomy suspended.

The move comes in the wake of a letter to Rajoy from the premier of Catalonia, Carles Puigdemont, in which the Catalan leader said the “suspension [of the declaration of independence] remains in force,” but in which he threatened a formal vote on independence inside the Catalan parliament.

Details of the letter were revealed by the radio station RAC1 shortly before 10am today – the second deadline set by the central government for Puigdemont to clarify whether or not he had unilaterally declared independence for the northeastern region.

On Wednesday it emerged that the Popular Party (PP) government of Rajoy was prepared to halt plans to implement Article 155 if Puigdemont were to call early elections.

The regional premier sounded out his PDeCAT party yesterday on such a move, but it was rejected. The group is calling on Puigdemont to lift the suspension on the declaration of independence, should Article 155 be applied.

That concludes our live blog for today, thanks for reading. We'll be back tomorrow morning with the latest updates. 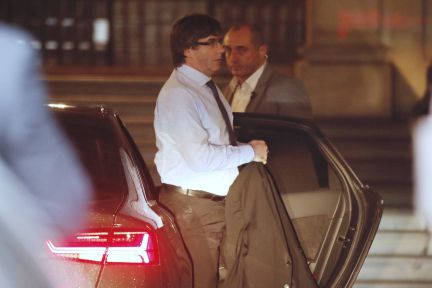 Here is Puigdemont's letter to Rajoy in English, as tweeted by the Catalan regional government. 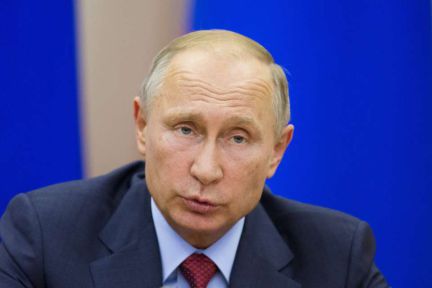 Putin: The crises in Catalonia and Kurdistan are consequences of the “double standard” of the West when it comes to separatism

Russian President Vladimir Putin said on Thursday that the secessionist crisis engulfing Catalonia and Iraqi Kurdistan are a consequence of the politics of “double standards” in Western countries. “It turns out that for some of our colleagues there are good freedom fighters and there are separatists who cannot defend their rights even with the help of democratic mechanisms,” said Putin, who was speaking at the Valdai international debate club.

Catalan regional premier Carles Puigdemont has tweeted out statements made by former Italian PM Silvio Berlusconi, in which he said that he would not have sent the Civil Guard in to try to stop the illegal referendum in the region on October 1.

Spanish Prime Minister Mariano Rajoy has arrived in Brussels for an EU leaders summit. He did not make any statements to journalists.

Debate continues as to whether Catlan regional premier Carles Puigdemont has actually declared indpendence. The Basque regional premier, Iñigo Urkullu, said on Thursday that Catalonia "never made a unilateral declaration of independence, and as such Article 155 of the Constitution should not be applied under any circumstances."

Urkullu added that doing so would just throw more fuel on the fire.

Spain’s Supreme Court has rejected requests from the Catalan regional government to suspend the central government’s move to take over its finances, Reyes Rincón reports. The measure was adopted ahead of the October 1 illegal referendum on independence, due to fears that the regional government was using public funds to pay for the preparation of the ballot.

Chancellor Merkel champions solution for Catalonia based on Spanish Constitution

Angela Merkel said today that she was supporting the Spanish government in the face of the secessionist challenge in Catalonia, and defended a solution to the conflict “that is based on the Spanish Constitution.” Merkel made her statements on arrival at an EU summit in Brussels, at which the Catalan crisis has dominated in conversation but is not included in the order of the day.

EU leaders will use a meeting in Brussels to send a “message of unity” with Madrid in the midst of the independence crisis in Catalonia, Macron said. (AFP)

Economy Minister Luis de Guindos announced today that sales in superstores and department stores in Catalonia have fallen by 20% since the October 1 referendum.

Meanwhile, Spain’s Congress has approved a royal decree that makes it easier for Spanish companies to move their legal HQ out of Catalonia. The legislation counted on the support of the governing Popular Party, the Socialist Party and Ciudadanos.

Junts pel Sí and their partners in the Catalan parliament, the far-left anti-capitalist CUP party, have just finished a meeting to discuss the reactivation of the declaration of independence.

The meeting held by the two parties in the regional parliament lasted two hours, and came in response to news that the central government will be activating Article 155 of the Spanish Constitution.

The two groups agree that they will declare independence if the central government does not do a U-turn on its decision to suspend the region’s autonomy, and are finalizing details of how to do it. Neither of the sides wanted to comment after the meeting. “We are working. When we have something to say, we’ll say it,” said Marta Rovira of the Republican Left of Catalonia (ERC), which forms part of Junts pel Sí.

Here's the NYT's take on what's happening in Spain 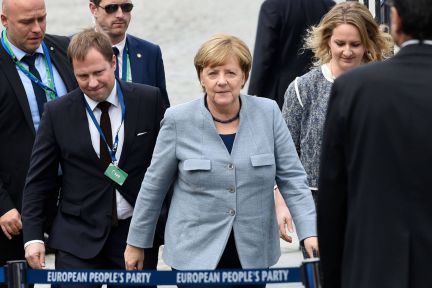 The Catalonia issue isn’t on the agenda at the EU chiefs meeting in Brussels this Thursday and Friday but is a major focus of conversation in hallways, with diplomats from around the continent surprisingly familiar with Article 155, Claudi Pérez and Lucía Abéllan report.

Spanish PM Mariano Rajoy is set to arrive in the Belgian capital today but his team says he has no plans to discuss the Catalan crisis. “If prime ministers ask about it in the hallways, he will tell them about the situation but it is not on the agenda,” sources say.

The president of the Spanish Senate, Pío García Escudero, will call a meeting of the Senate committee either this Saturday or Monday of next week to look at the application of Article 155 of the Spanish Constitution, once the government has sent through details of the measures set to be approved at a Cabinet meeting set for Saturday.

Parliamentary sources have explained that actual Senate approval of those measures could come as late as October 30.

Miquel Iceta, leader of the Socialists' Party of Catalonia (PSC) has said of the letter from Catalan Premier Carles Puigdemont to Spanish Prime Minister Rajoy: “It is not that answer we Catalans hoped for or deserved. Puigdemont recognizes that he didn’t declare independence. He should have said that from the start.”