Spaniards returned to the polls this Sunday. A total of 36,518,100 voters were called upon to cast their ballot, for the second time in six months after the inconclusive vote in December and subsequent failure of Spain’s political parties to reach an agreement to form a government. Despite expectations to the contrary, the Podemos-United Left coalition failed to knock the Socialists off the second spot, and the PP once again won most seats, but still fell short of a majority.

That concludes our live blog of today"s general elections. We"ll be back on Monday morning with the latest news and analysis in English. Thanks for reading!
Simon Hunter21:52
FULL STORY: PP picks up new seats in election re-run win, while PSOE hangs on in second http://cort.as/i4Cn
Simon Hunter21:51
Pedro Sánchez (PSOE): "I am not satisfied. The Socialists wanted to win these elections and we have not achieved that, but we are still the biggest political force on the left."
Simon Hunter21:33 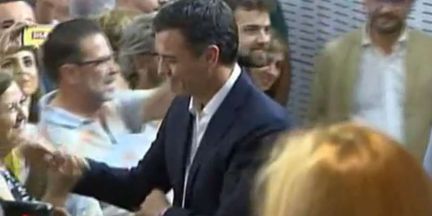 PSOE candidate Pedro Sánchez thanks voters and acknowledges PP win. "In spite of the extraordinary difficulties and expectations, the PSOE has once again confirmed its place as the hegemonic party of the left."
Simon Hunter21:32 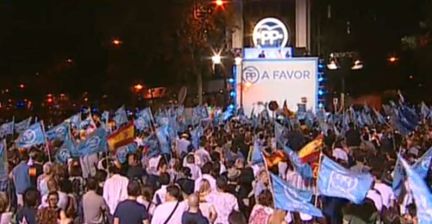 Celebrations outside the PP headquarters in Madrid
Simon Hunter21:29

Pablo Iglesias: "We are not at all satisfied with these results"
Simon Hunter21:15
BREAKING: Deputy PM Sáenz de Santamaría: "The PP has won the elections."
Simon Hunter21:08 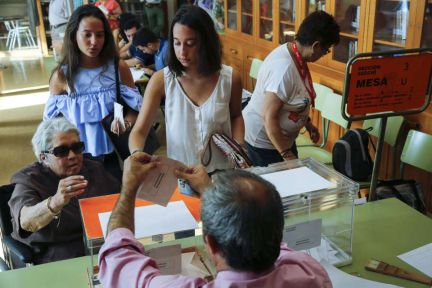 Corruption cases don"t seem to have affected the PP in Valencia, where they have gone from 11 to 13 deputies with 35.5% of the vote (four points more than in December with 96% of vote counted. In the photo, voters in Valencia city. Photo: Mònica Torres
Simon Hunter20:45

With 90% of vote counted: PP 136; PSOE 86; Unidos Podemos 71; Ciudadanos 32. Absolute majority 176 seats
Simon Hunter20:40
EL PAIS journalist Antonio J. Mora: “With 88% of the vote counted, the PP has won in Andalusia, a traditional Socialist stronghold:, which delivers 23 seats to the conservatives and 20 to the PSOE.”
Susana Urra20:39
EL PAIS journalist Carlos E. Cué: “Low turnout and the failure of an attempted center-left pact have clearly benefited the PP. Will there be a government. The PSOE will decide that.”
Susana Urra20:34
EL PAIS journalist Berna González: “With 84% of votes counted, the left is not beating the right, contradicting surveys that said the opposite. Stay tuned for the results of the postal vote.”
Susana Urra20:27
“Someone who was handing out resignation rulings might have to start applying them to himself”: PP Senator Xavier García-Albiol, alluding to calls for the resignation of the acting interior minister over a political persecution scandal in Catalonia
Susana Urra20:20