Madrid city officials believe that the damage from the severe snow storm that battered Spain last weekend will run into the hundreds of millions of euros.

Municipal technicians were expected to produce a document on Wednesday with an estimate of losses, and Mayor José Luis Martínez-Almeida of the Popular Party (PP) said that a decision on whether to apply for disaster zone declaration would be taken on Thursday.

Meanwhile, the central government has begun its own evaluation of the damage wrought by Storm Filomena and by the cold snap that followed on its heels. Sources in the executive, which is led by a center-left alliance of the Socialist Party (PSOE) and Unidas Podemos, signaled that it might go ahead with disaster declarations for the hard-hit regions of Madrid and Castilla-La Mancha without waiting for formal applications by regional officials.

But these sources also noted that it is still too early to get a full picture of the extent of the damage, as parts of Spain remain in the grip of record-low temperatures, while accumulated snow and ice are preventing a return to normal activity. Eight provincial capitals registered -10ºC and colder on Tuesday morning, and in two locations thermometers showed an unprecedented -25ºC.

Madrid regional officials on Wednesday warned that it could be weeks before things go back to normal. Deputy premier Ignacio Aguado, of Ciudadanos (Citizens), underscored the difficulties of removing the snow and ice from all the roads and sidewalks, and admitted that some schools may not reopen on Monday as planned after being closed this week.

“It’s not a question of optimism, it’s a question of realism,” he added. “The situation is very complicated, unseen in Spain in the last 70 years. It will take time to recover. There is work ahead of us.”

Four days after the blizzard moved east, bus lines and garbage collection services have yet to be fully operational. At least 150,000 trees need to be checked for risk of falling branches, and thousands of streets remain clogged with snow and ice.

In sports, a Euroleague soccer match between Real Madrid and Red Star Belgrade scheduled for 9pm was cancelled after the Serbian team’s flight did not receive clearance to land at Madrid’s Adolfo Suárez-Barajas airport due to the bad weather conditions. Flights at Barajas have resumed only partially since the white-out conditions closed the airport last weekend. 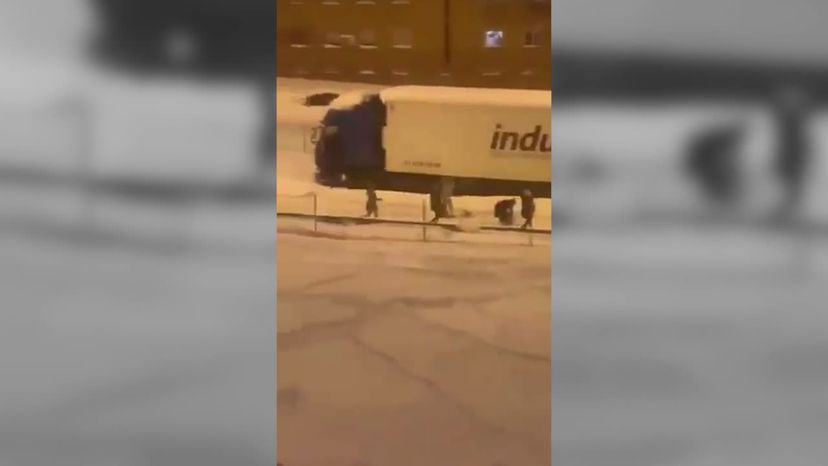 The storm has brought out the best in some people, and the worst in others. Between Friday and Saturday, around 50 individuals looted a trailer truck filled with 20,000 kilograms of food that was going to be delivered at a nearby Alcampo superstore in Madrid’s Moratalaz district.

When the vehicle got trapped in the snow, the driver remained with his vehicle for hours in the hopes of getting towed. He was eventually rescued by a colleague on Friday night, and when he returned to the truck on Saturday morning, he found people walking away with boxes of goods.

The driver said he would call the police but received death threats in return. A patrol car showed up but was soon called away to another emergency, and the looters proceeded to finish their work after ripping down the fences separating Moratalaz from the M-30 ring road. An investigation is underway but no arrests have been made so far.