Parties in hotel rooms, outdoor drinking sessions, cruises and a crowded reggaeton concert in Mallorca, in Spain’s Balearic Islands. These are some of the hotspots of the coronavirus outbreak that has led to more than 1,000 cases in eight Spanish regions, and forced more than 2,000 people to quarantine in Madrid alone. There are related cases in Galicia, the Valencia region, the Basque Country, Murcia, Castilla-La Mancha, Aragón and Catalonia.

An 18-year-old student from Elche, in the Valencia region, has been taken to intensive care after getting infected during an end-of-term trip to Mallorca and developing serious symptoms of Covid-19, regional health officials have confirmed.

On Tuesday, 262 youths were being confined at hotels in Mallorca to keep a 10-day quarantine. The majority of these students are being forcibly held there under police custody after the regional government issued a public health resolution following many youths’ refusal to cooperate. But prosecutors on Tuesday said they oppose the resolution because students are being treated as close contacts without clear evidence. Students have been posting social media messages about being “kidnapped,” and one mother has filed a complaint against public health authorities for “unlawful detention.”

Every year, around 12,000 students from across Spain travel to Mallorca to celebrate the end of the school year. Some have just completed their university admission exams (EVAU), while others have finished their last year of secondary school (ESO). In the case of the former, the students are between 17 and 18 years old and they organize their own trips, and in the latter, they are between 15 and 16 and travel under the supervision of adult monitors.

The trips are organized by specialized travel agencies such as Tu Fin de Curso and Xcape, which offer complete vacation packages for under €400. These packages typically include a plane or ferry ticket to Mallorca, airport transfers and nearly a week of accommodation at a hotel in El Arenal or Magaluf, both popular resort towns which are home to numerous bars and restaurants. The offers also include entrances to pool parties, cruises, aquatic activities and discounts for certain events.

The outbreak involves activities that took place between June 12 and 18, just as restrictions on nighttime bars and music venues were being lifted on the island. But nightclubs in the region remain closed, meaning many youngsters have been gathering to drink outdoors, a practice commonly known in Spain as a botellón.

On social media, dozens of videos showed students drinking on the streets, dancing together, sharing drinks and singing at the top of their voices – all without social distancing or face masks. Up until June 26, it has been mandatory in Spain to wear a face mask in both indoor and outdoor spaces, regardless of whether social distancing can be maintained. These rules were relaxed on Saturday, meaning the covering does not need to be worn outside – but only on the condition that a safe distance of 1.5 meters can be respected.

Between June 12 and 27, local police also reported 54 people and three hotels for violating municipal rules. Police are also investigating whether nightclubs and other closed spaces in certain establishments were used to host student parties. “We reported several people because there were up to 20 people in one hotel room, without face masks, without respecting social distancing rules and making a lot of noise,” said Sergi Torrandell, the head of the local police department in Llucmajor.

But the main incident under review is the Reggaeton Beach Festival, which took place in Palma on June 15. The event was canceled by police mid-show for failing to comply with coronavirus safety measures. The festival was held at the Palma bullfighting ring, which had an authorized capacity for 200 people on the concert floor and 1,000 for stadium seating. Hundreds of people, however, were gathered on the central dance floor next to the stage, and were singing and dancing without face masks. The regional government is now investigating whether the organizers of the event committed a serious infraction, fined with anywhere between €60,000 and €600,000.

Other infections have also been tracked to parties on cruises and in coves, where attendees did not follow safety measures.

The Balearic Islands’ committee on infectious diseases said that “it is most likely” that the first coronavirus cases that caused the mass outbreak came from a region of Spain with higher transmission rates. Travelers from most Spanish regions are required to present a negative PCR or antigen test in order to enter the Balearic Islands. But this measure is not needed for visitors coming from Valencia and Murcia, where the 14-day number of cumulative cases per 100,000 inhabitants is close to or below 50.

“Every now and again there is a superspreader outbreak where there are a lot of people with a very high viral load,” explained Javier Arranz, a doctor and member of the region’s special committee on infectious diseases. “Sharing cigarettes, drinks and staying in enclosed areas can lead to these types of events.”

The season for end-of-year student vacations runs from June 10 until the end of the month. But for the students who remain in Mallorca, the party is over. In response to the outbreak, many scheduled activities have been canceled, and the youths who remain on the island are under close watch.

“The actions of those who came a week ago have hurt us. They have fucked up the trip,” said one student on El Arenal beach in Palma. The adolescent – who preferred to remain anonymous – complained she and her friends are paying the price of the youngsters who failed to respect coronavirus safety rules. “On the boat trip we were on, we had to have a face mask on until we were practically in the water,” she said.

A total of 249 students from Madrid, Galicia, Andalusia and the Basque Country who had direct or indirect contact with the positive cases have been transferred to Palma Bellver hotel, a four-star establishment that the regional government is using to accommodate tourists who contract the virus while on vacation and do not develop symptoms, and people who are considered close contacts. Of the 249 who have been transferred since Monday, 26% (62) have tested positive. Another 13 youngsters are in quarantine in other hotels on the island, bringing the total number in self-isolation to 262. Another three have fled the island.

Last week, the Health Ministry’s Coordination Center for Health Alerts (CCAES) decided that anyone “who has participated or is taking part in end-of-year vacation in Mallorca and in the different activities surrounding them is to be considered a close contact.” 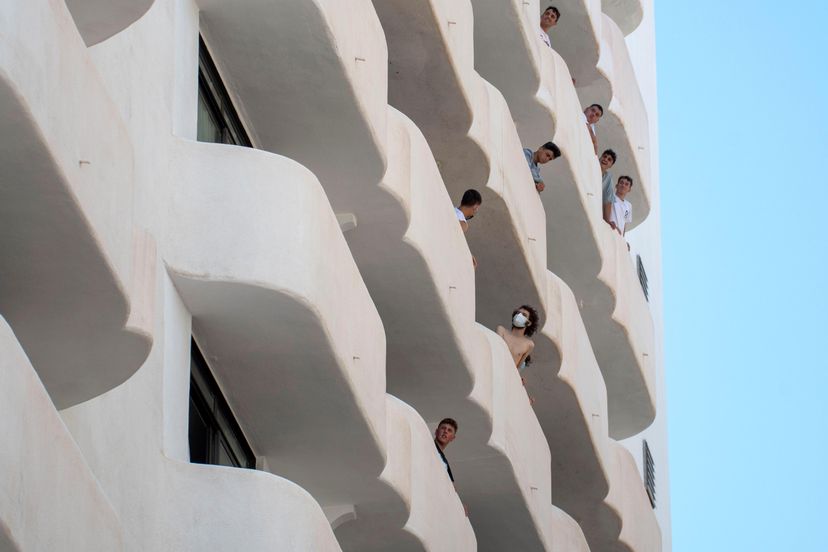 Youngsters protest from Palma Bellver hotel, where they are being quarantined.

The students considered close contacts must quarantine for 10 days from the date of their exposure to the virus. This resolution was passed after hotel management and the Civil Guard confirmed that there was “a mass attempt to evade” getting testing and that many youngsters were trying to leave the island by sea and air.

“We cannot let a person who has been in contact with a positive case take a plan or public transportation because it is a significant health risk,” said Patricia Gómez, the regional health chief on Monday.

Many of the quarantined students have taken to social media to complain about having to self-isolate for 10 days even though they have tested negative for the virus. In the videos, the youngsters speak of being “kidnapped” and held hostage against their will.

In response to the complaints, Gómez said: “We are doing what we can so that they have the best stay possible. We are addressing all the requests they make of us, which are far from few. It is a setback for them and their families, so we understand.”