Children under the age of 14 in Spain were allowed out on Sunday for the first time since March 14, when the Spanish government declared a state of alarm in a bid to slow the coronavirus outbreak.

Under the relaxed confinement rules, families must respect social distancing rules to avoid coronavirus contagion. But on Sunday, social media was flooded with photos of parents and children in large groups, who were apparently not keeping a safe distance apart. The images quickly went viral, turning the hashtag #irresponsables or #irresponsible into a trending topic.

Sources from the Spanish Interior Ministry insisted, however, that there were no “serious or widespread breaches” of the confinement rules on Sunday. “When the figures from the first day [children were allowed outside] are received, a detailed study can be carried out and if necessary we will strengthen surveillance in specific areas,” these sources added. 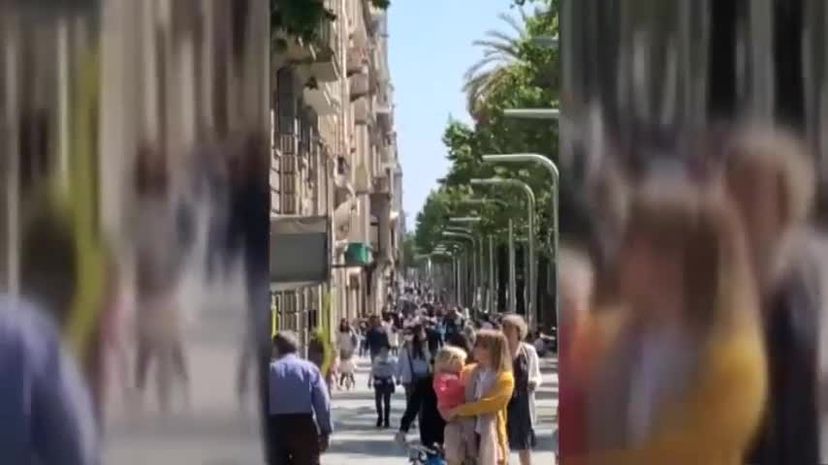 The government order, published in the Official State Gazette (BOE) on Saturday, states that children are allowed to go outside for a walk or for sport within a one-kilometer radius of their home for no longer than one hour. They must be in the company of an adult, who can be a parent, legal guardian, someone who lives with them, or a professional carer. One adult can accompany up to three children.

On Sunday, however, social media users and the media shared images of families allegedly breaking these rules. Some, for example, showed Madrid’s Felipe II square crowded with children on bicycles and scooters. In others, large groups of youngsters were seen playing soccer in parks. There were also images of beaches in Barcelona packed with people as though it were the first day of summer.

In many of the photos, adults were also caught seemingly breaching the social distancing measures. Some showed large groups of parents talking to each other, with and without a face mask; and in other cases, adults were seen sitting together on a street bench, or standing close to one another as they walked their dogs. Despite these reports, Health Minister Salvador Illa said on Sunday that the government recommendations were “generally being met.”

The Interior Ministry has not commented on the images, and will wait until it has all the figures from the state security forces on Monday before reaching any conclusions. Sources from the ministry, however, say that the photos depict “one-off occurrences,” adding that “there has been no communication of serious breaches.”

When there is a new outbreak and the confinement rules are brought back, remember how “fun” it was when we could take children outside.

Several local authorities, however, expressed concern that the new lockdown rules for children were not being respected. In the southeastern city of Valencia, Mayor Joan Ribó, said that “there was an acceptable degree of compliance in many neighborhoods” but recognized that “there were breaches in some squares and in some parts along the river.”

In the southern city of Huelva, city councilor Luis Albillo called on parents to act responsibly after local police reported that “numerous people were breaking the rules.” Albillo, who is in charge of mobility and public security, warned that this type of behavior was jeopardizing “all the progress that has been achieved with so much sacrifice.”

And Alejandro Toquero, the mayor of Tudela, in the northern Navarre region, said that while most people followed the rules on Sunday, there were signs of breaches. “It is not yet the time to have soccer games in public squares. It is not the time for the entire family to go riding their bikes. It is not the time to go running with your child by your side. That is not the idea. Not yet,” he said. “There continues to be the risk of contagion.”

On Saturday, Prime Minister Pedro Sánchez announced that all Spaniards – including seniors – will be allowed to go out for exercise and for walks starting on May 2 if coronavirus contagion figures go down. This would be the second time that the Spanish government has moved to ease strict confinement measures that have been in place since March 14, after relaxing the rules to allow daily outings for children under the age of 14.