What was David Morales, owner of UC Global S. L., the Spanish company that spied on WikiLeaks founder Julian Assange during his stay at the Ecuadorian embassy in London, doing in Alexandria, Virginia?

Located around 10 kilometers from Washington DC, Alexandria is home to the US federal court that has been investigating the Australian cyberactivist for years and has requested his extradition from the United Kingdom, where he remains in prison after he was expelled from the Ecuadorian embassy in April following a seven-year asylum.

An analysis of emails sent by Morales to several of his employees shows that this former member of the military was in Alexandria on March 1 and 2, 2017. The IP addresses of these messages, which EL PAÍS has seen, show that at the time that they were sent Morales was in Alexandria, where a federal court is seeking Assange’s extradition on 18 counts stemming from accusations that he revealed classified intelligence about the Iraq and Afghanistan wars, which could lead to a prison term of 175 years.

Morales was in Alexandria near the date that WikiLeaks announced the publication of Vault 7, a collection of thousands of documents about an alleged cyber-surveillance program by the Central Intelligence Agency (CIA) capable of compromising cellphones, smart TVs and computers with internet access produced by US companies, transforming them into microphones to spy on their users. The disclosure revealed an enormous security gap at the CIA and triggered a scandal similar to the ones involving former CIA subcontractor Edward Snowden and former intelligence analyst Chelsea Manning. 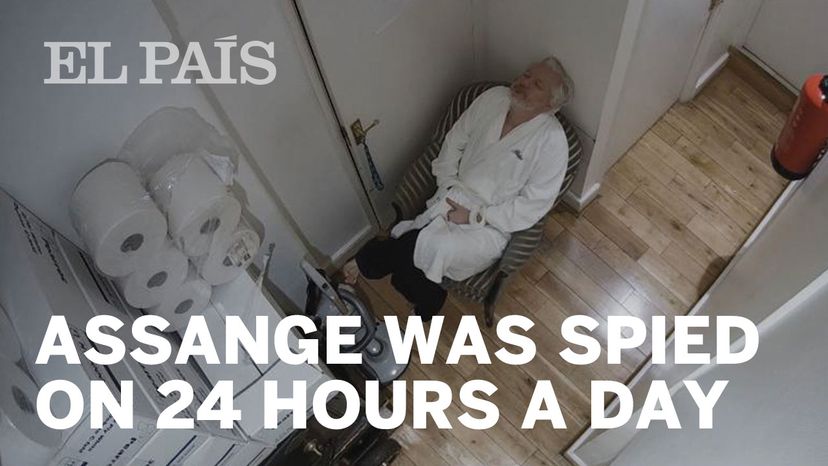 Assange was spied on 24 hours a day at the embassy.

UC Global S. L. spied on Assange for the CIA, as shown by testimony and documents disclosed by this newspaper. Morales allegedly gave the intelligence agency audio and video material on the cyberactivist’s meetings with his lawyers and collaborators at the embassy. Following this newspaper’s revelations, Judge José de la Mata of Spain’s High Court, the Audiencia Nacional, agreed to consider a criminal complaint filed by Assange against Morales, who was arrested and is now the target of an investigation into alleged violations of Assange’s privacy and attorney-client privilege, as well as misappropriation, bribery, money laundering and illegal possession of arms.

Morales often traveled to the United States. The IP addresses of the emails he sent his workers showed him to be variously in New York, Dallas, Miami, Washington, Chicago, Lakewood and Las Vegas. At this last location, the messages were sometimes sent from the hotels owned by Sheldon Adelson and his Las Vegas Sands Corporation. Morales has been working for the billionaire business magnate for years, taking care of security on the latter’s yacht during trips to the Mediterranean. The company’s personnel includes a former CIA official. Adelson is one of the main donors to the Republican Party and a personal friend of Donald Trump.

Although UC Global had been hired by Senain, the secret services of Ecuador, to watch the embassy in London, Morales confided to a few trusted employees that they were also working “for the Americans,” to whom he was allegedly handing over video and audio footage of Assange’s conversations with his visitors at the embassy.

UC Global S. L. spied on Assange for the CIA, as shown by testimony and documents disclosed by this newspaper

“I want to alert you to the fact that we have to be very careful about the information that we send over...and tell everyone to be careful with the information... Senain (the secret service of Ecuador) is investigating us. That’s why I would like, in the first place, for my geographical location to be handled with discretion as much as possible, especially my trips to the US,” wrote Morales in an email addressed to several of his workers.

“We have been informed of suspicions that the guest [this is how Assange was alluded to] is working for the Russian intelligence services, thus the profiling of his visitors and aides,” he wrote in another message.

Morales ordered his workers at the Ecuadorian embassy in London to spy on, and record the conversations of, any Russian or US citizens who visited the WikiLeaks founder.

On November 22, 2018, several months after UC Global had stopped providing its services at the embassy, Morales asked his employees whether they had any records of visits by Paul Manafort in 2013, 2015 and 2016. The subject line of this e-mail message said “Query.”  Manafort is a US lawyer who joined Donald Trump’s presidential campaign in 2016. He has since been sentenced to three and a half years in prison for various irregularities and for conspiracy as a member of a lobby group in Ukraine. Sources close to the cyberactivist state that Manafort never visited Assange. Manafort himself denies ever having met with the founder of WikiLeaks.