Something is happening on the beaches of Catalonia. Videos have been circulating in recent days, showing incidents involving yellow crosses driven into the sand, which some people defend while others pull them out. These confrontations between supporters and detractors of Catalan independence have sometimes escalated from the verbal to the physical.

The tourism industry says that if this becomes a regular occurrence during the summer, it’s going to be a problem

And this past Sunday, in Mataró, pro-independence activists laid out yellow scarves in the shape of crosses – representing former Catalan government officials who are in custody awaiting trial over their role in the unilateral independence push. There were angry verbal exchanges while local and regional police officers looked on, but no physical violence.

The tourism industry says that if this becomes a regular occurrence during the summer, it’s going to be a problem.

Depending on who you talk to, the recent incidents at Canet de Mar, Llafranc and Calella de Palafrugell are either anecdotal, or a symptom of rising tensions in Catalan society.

Either way, organized groups from both sides of the divide are cropping up and taking action in an increasingly public manner.

“We are not fascists, although we are used to being told that we are,” says José Casado, 38, who leads a group called Els Segadors del Maresme. Created in January of this year, it has 2,600 followers on Twitter and around 50 members who go around removing yellow ribbons and other symbols left in public spaces by separatist activists.

At first they worked at night, but these days they are also doing so in broad daylight. It is this group that was accused by separatists of injuring three of their own activists at Canet del Mar, when the latter tried to prevent Casado and his aides from pulling out crosses at the beach.

Casado says that they took the crosses to the local police precinct and did not touch anyone, and that they follow a rule of “not talking to them because we will never find common ground, they’re stuck in their own loop.”

Marc Jiménez, a local councilor for the far-left CUP party who denounced attacks by Casado’s group at Canet de Mar, did not reply to this newspaper’s requests for information.

The beach display at Canet del Mar was set up by members of the pro-independence grassroots group Committees to Defend the Republic (CDR), which has conducted other public acts of protest in the past, such as blocking roads and tampering with highway toll booth barriers.

“Let both sides consider if it’s worth it”

The yellow cross display in Mataró last Sunday was a significant step up from previous beach protests in several ways. For the first time, separatist activists had announced it ahead of time, rather than showing up by surprise. And Mataró is a city of 126,000 residents, not a small village.

Mayor David Bote, a Socialist, had warned that authorization would be required, and that the police would act if necessary to enforce the law.

“We are worried. Mataró is a very plural society. Judging by what’s already happened, and by the opposing protests called on social media, we think there could be a conflict,” said the mayor ahead of the event. “I have urged both sides to rethink whether this is worth it, if that’s what people want, for Mataró to be remembered for a conflict.”

In the end, there was some tension but confrontation was avoided as separatist activists laid out around 100 yellow scarves and towels, which they shaped like crosses, on a little-used section of the beach.

The regional government of Catalonia told EL PAÍS that from now on, anyone wishing to exhibit yellow crosses in a public space will have to request a permit and provide details about the place and time. There was no known official organizer of the Mataró cross display.

Asked if things are going to keep escalating, Mayor Bote said that he would keep urging residents to be good neighbors to one another. “I think that the majority feeling is a desire for things to go back to normal. I want to believe that this will not keep happening in the summer,” he said.

Meanwhile, unionist groups organized their own demonstrations in Barcelona, where people laid out scores of Spanish flag towels at Sant Sebastiá beach on Sunday.

Casado, the leader of Els Segadors del Maresme, says that some members of his group wear face masks to prevent the other side from targeting them on social media, exposing where they live and work.

A boxing instructor at local gyms in Mataró, Casado says he never followed politics before, but figured he had to do something following the illegal referendum of October 1. He admits that he has close ties to Mónica Lora, secretary general of the far-right party Platform for Catalonia and a local councilor, but he says that Els Segadors is an ideologically diverse group whose members are united by their anti-secessionist sentiment.

Asked if he thinks things could get uglier, Casado answers affirmatively. “I think so. Something is going to happen, and not in the long run either.”

The regional government of Catalonia told EL PAÍS that from now on, anyone wishing to exhibit yellow crosses in a public space will have to request a permit and provide details about the place and time

There are other such groups in different parts of Catalonia, but Casado says that some are more confrontational than others. The Defense and Resistance Groups (GDR) were created in April as a response to the pro-independence Committees to Defend the Republic (CDR), and they have 94,500 followers on Twitter.

GDR founder Jaime Vizern says that his umbrella group is made up of around 15 smaller units comprising around 600 people, and that “we don’t just clean the streets of yellow ribbons, we also oppose the CDR when they do something – but without seeking contact.”

Vizern, who once showed up outside ousted Catalan leader Carles Puigdemont’s one-time accommodation in Waterloo, Belgium dressed up as a Civil Guard officer, does not believe that the situation is turning violent.

“What’s more, we’re thinking of no longer doing this at night or wearing masks, so people can see that we’re doing nothing wrong, that we’re normal people,” he said.

On May 8, the CDR and the GDR clashed over a yellow-ribbon display in Barcelona, but the police stepped in and there were no reports of violence.

Instead, regular citizens who reacted to the crosses in Calella de Palafrugell have been feeling the fallout from the social media exposure after separatist activists shared videos. 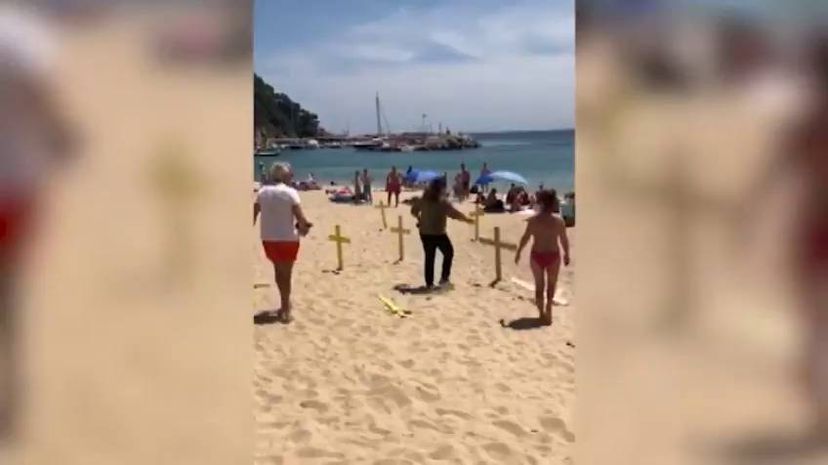 A video of a scuffle on a Catalan beach earlier this month over the yellow crosses (Spanish audio).

“My wife showed up everywhere,” says the husband of a woman who is seen arguing with separatists at the beach. “We got calls from friends halfway around the world telling us they’d seen us.” This man does not want their names in print, and says his wife has been completely overwhelmed by all the media attention.

“She’s just a regular person with no political ties who reacted to something that was intolerable,” he says. “Public spaces belong to everyone, and when you go to the beach you hope to be left in peace, without someone proclaiming their views.”

This man says he called the police but that they did nothing. The passive attitude of the authorities has been a constant feature: either they don’t know how to deal with it, or else they tacitly support the separatist displays. Arenys de Munt has become the first Catalan municipality to forbid removing yellow ribbons from public areas. Most towns in Girona and the Costa Brava are pro-independence, and it is noticeable that all the beach protests have taken place in this part of the coast, where tourism from Spain only represents 8% of the total and most beachgoers hail from France, Britain and other European countries, according to industry figures.

In other words, the cost of offending national tourists is low, while international publicity is ensured. Instead, the confrontation has broken out among Catalans themselves.

Juan Carlos Bisbé, the owner of a restaurant in Llafranc, says he is worried about the area’s image. “They’re painting a picture of Catalonia that is not real; we’re not beating each other up over here,” he says. “Everyone thinks whatever they want to think, there is no violence, but people are being frightened.”