Two days after Catalonia held a banned independence referendum, the region was operating at half speed on Tuesday due to a general strike called by small unions. The two large Spanish general workers’ unions, UGT and CC OO, have encouraged people to demonstrate in a “paro de país” (country stoppage) to protest the police violence on Sunday, but underscored that they are not participating in the call for a general strike.

For weeks, the separatist movement has been trying to attract Catalonia’s majority unions to their cause. But the latter’s position is to demand a legal, negotiated referendum for the region, not a unilateral secession.

The strike was called to protest National Police and Civil Guard action on Sunday after almost 850 people ended up needing medical attention as ugly scenes played out – scenes that were beamed around the world – between the authorities and members of the public.

Minimum services were established during rush hour (from 6.30am to 9.30am, and from 5pm to 8pm) for subway, bus and train services. The strike has been backed by the Catalan executive, known as the Generalitat.

Meanwhile, members of the National Police and Civil Guard were under pressure from the hotels where they are staying to leave, and in some cases were ejected.

Thousands of people also gathered in Barcelona and Reus to protest in front of police stations.

Prime Minister Mariano Rajoy is set to make an appearance in Congress next week, and held talks with other political leaders in a bid to deal with the Catalan crisis.

Data from the poll shows around 90% of voters cast their ballots in favor of independence. However, participation was just 2,262,424 of a total voter pool of 5,343,358, for a turnout rate of 42%, according to the Catalan government’s own figures. The abstention rate was 58%.

That brings to a close our coverage of another extraordinary day of events in Catalonia. You can see all of our stories on the region's bid for indpendence here. The English Edition will be back tomorrow morning with further updates. Thanks for reading.

"Three people with a Spanish flag and a shout of 'Viva España'. Peaceful atmosphere and normality seen all day continues," reports Guillem Andrés.

The Spanish Tax Agency will dock salaries of Catalan civil servants who have observed today's strike. This will apply to central and regional government workers.

Barcelona Mayor Ada Colau in a tweet: "There have been no incidents during the morning on the streets of Barcelona, where 300,000 people came out" 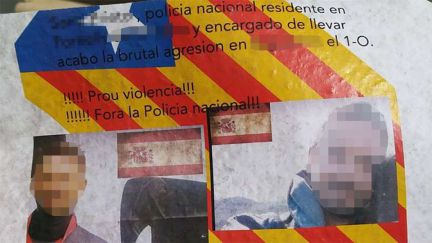 In Catalonia fliers have been distributed with the information of National Police officers who took part in the police operations on October 1. They carry a photo of the officer and their place of residence. "National Police out," the text reads.

Peaceful scene on the streets of Pineda de Mar right now, reports J. J. Gálvez, although local residents are still outside the hotel where police officers are staying. The municipality has been at the center of a row today after claims the local council tried to force the hotel to eject the officers, something the mayor has since denied.

Republican Left of Catalonia (ERC) has announced it will bring a lawsuit against the Popular Party spokesperson in Congress, Rafael Hernando, after he accused party ledaer Oriol Junqueras and far-left group CUP of "wanting to see deaths" in Catalonia, Europa Press reports

Activity suspended at port in Barcelona. Massive support of strike among port workers, but no incidents or vandalism reported. Minimum services - mostly in place to deal with dangerous or perishable cargo - have been respected, Clara Blanchar reports.

Harassment of journalists. Reporter from La Sexta, Guimoar Roglán, claims to have been chased through the streets by hundreds of people for 25 minutes after leaving the Catalan parliament. She eventually had to seek refuge in a municipal police car, which was being escorted by the Mossos.

A man walks through the demonstration on the Via Laietana waving a Spanish flag, reports Alfonso Congostrina.

"I want to express my total support for the security forces, who are defending legality and the rights of everyone in Catalonia."

Tensions continue to run high in Pineda (Barcelona). In this video, from EL PAÍS reporter Tatiana López, defenders of the unity of Spain (on the street, with flags) argue with pro-secessionists. The scene is playing out outside a hotel where police officers are staying.

Applause for firefighters in Via Laietana, to shouts of "The firemen will always be ours!" Guillem Andrés reports.

The chiefs of the Mossos d’Esquadra have thanked their officers for the role they played during the referendum. In an internal message they express appreciation for “the work carried out in a silent but efficient manner” in recent days, “especially since Friday and during the tough day we went through [on Sunday]. No one can argue that it will go down in the history of our country as a sad day,” the statement continues, because it “saw at least 893 injured.” Reporting by Rebeca Carranco. Photo: Mossos chief Josep Lluís Trapero. (JOAN SÁNCHEZ)

Barcelona. Officers from the National Police force in Barcelona are protected by a cordon of five Mossos d’Esquadra vans, Guillem Andrés reports

Podemos leader Pablo Iglesias. "A Spain with Catalonia is only possible with the PP outside of the Spanish government. This is the image of the country we want."