This account by the referee at one of the more than 20,000 soccer matches held in Spain’s regional lower and amateur leagues every weekend is far from unusual: a state commission set up to investigate violence, racism, homophobia and intolerance in sport reported 115 attacks on referees over the course of the 2015-2016 season, a 47% rise from the previous year.

Further evidence of the problem can be found on a Facebook page set up by an informal and clandestine union of referees, detailing some 400 attacks against them over the last three years, 24 in January alone.

A female referee stopped a game after somebody shouted: “Go do the dishes”

“There isn’t a single game I have refereed where I haven’t been insulted,” says Pablo Fernández Montaño, 31, who retired recently. He says many referees are afraid to report attacks. “It’s an educational issue. Insulting the referee is allowed, it’s normal. If somebody doesn’t like your decision they think they have every right to do what they like. And this is a sport!” he says in desperation.

“I have a colleague who had two teeth broken after somebody hit him. The assailant was banned from playing for two years. I have never been attacked physically, but I’ve been pushed and spat on, and of course insulted. You get used to it,” says a 25-year-old referee who oversees games in the Basque Country’s Primera Regional league.

Fernández Montaño, the Andalusian referee, says that he has learned to park his car away from soccer grounds at village matches, in case players or fans come looking for him after the game: “They will attack you or damage your car,” he says.

He says that on one occasion, a player almost ran him over after a game. “He came to a stop a meter from me and my assistants as we were crossing the road. I reported him, but my assistants weren’t accepted as witnesses. I think he was fined €30,” he recalls.

Fernández Montaño adds that parents watching their children play often set a bad example. The only solution, says Pablo, is zero tolerance. “There are junior leagues where the referee will stop the game if a parent starts screaming insults from the sidelines. I think that is a good idea.”

Felipe Gutiérrez, another veteran referee, says he is insulted at every match he oversees, adding that the growing problem of violence is putting off young people from training as referees and that in Seville alone, there are “60 or 70 fewer referees than other years.”

He complains that Spain’s Referee Committee and the other organizations responsible for the lower leagues refuse to act. “All they do is impose fines for violent behavior, but the guys who play dirty continue to play and no firm measures are taken to protect us,” he says.

Juan Antonio Álvarez has been a referee for 25 years in the Cadiz area. He says that the game has always been high risk for referees: “It’s not that there have been more attacks in the last month, it’s that attacks are being reported on the social networks and so they have an impact. Referees are afraid,” he explains. “This afternoon I was refereeing a juvenile match and I overheard the coach telling the kids that this was ‘war’. It’s no surprise that they then insult the referee.” 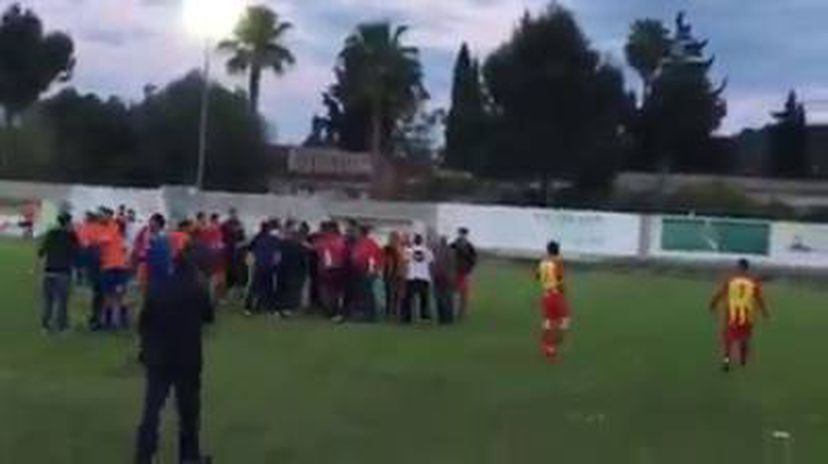 A video of an attack against a referee posted on Facebook.Sindicato de árbitros

In September, Marta Galego, a referee in the Catalan soccer federation, stopped a match after a supporter told her to “go do the dishes.” The offender was escorted out of the stadium to applause.  Galego was following the guidelines of the Catalan federation’s Cero insultos en la grada policy (Zero insults in the stands), which allows referees to stop soccer matches if fans refuse to moderate their language.

“We’re allowed to stop matches in the Basque Country as well,” says a referee based there, adding that one thing is the rule book and another is applying it. “You can flash a black card as a warning, a second one means a suspension. These types of cards are applied for homophobic and racist insults during school games. But the reality is that the clubs complain, which dissuades referees from doing so,” he adds.

The referees who set up the Facebook page say that the regional federations and other authorities need to get involved and provide more resources and help to allow them to carry out their job without fear of being attacked.

How a Ukrainian soccer player became a political football in Spain