The remnants of so-called “Storm Gloria,” which has already claimed three lives in Spain, were today continuing their journey toward the southeast of the peninsula, gradually shedding its strength, according to the Aemet state meteorological service. But the province of Teruel was still on a red weather alert today, due to a forecast of 50 centimeters of snowfall. In total, 29 provinces in the north and the east are still on weather warnings due to snow, heavy seas, rain and winds.

Around 300,000 customers in Girona province, in Catalonia, awoke today without electricity, but were reconnected before 10am. The AP-7 freeway was also closed this morning between Figueres and the French border due to snow. A total of 8,000 customers were left without power in Teruel province.

By Monday evening, Gloria had made way for a powerful European anticyclone, which has been dubbed “Ekart” by the University of Berlin. The pressure difference between Ekart and the remains of the Mediterranean storm means that strong, humid winds are moving from the northeast of Europe toward the Iberian peninsula, and are combining with isolated areas of low pressure in the upper layers of the atmosphere. The combination of these elements is causing unstable conditions in Spain, including heavy rain and snowfall.

The wet weather will move today toward the west, affecting Cantabria, central areas, the east of the peninsular and the Balearic Islands. The rainfall will be heavy in Aragón, Catalonia and the Valencia region, where there could be as much as 80 to 150 millimeters of rainfall over just 12 hours. 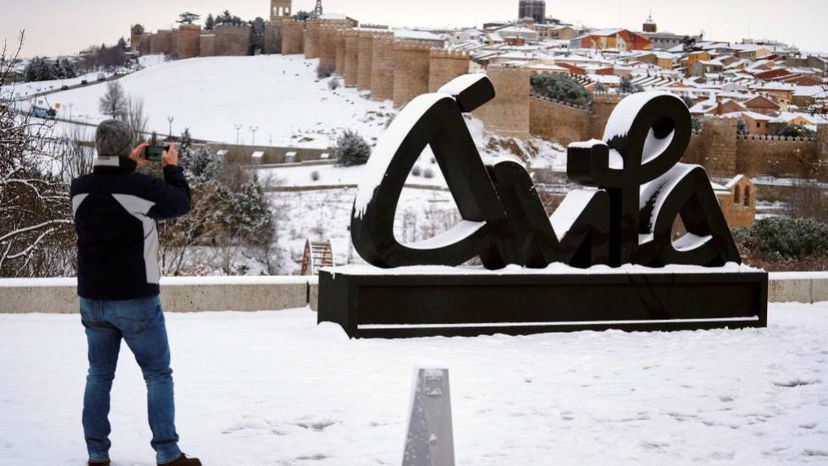 “It will rain in the whole country apart from in Galicia, the west of Castilla y León, Huelva and Extremadura,” explained Aemet spokesperson Rubén el Campo. There are orange alerts today for the provinces of Teruel, Barcelona, Girona, Tarragona, Castellón and Valencia, and yellow alerts in Almería, Zaragoza, Lleida, Alicante, the Balearics and Murcia, where 40 to 60 millimeters of rainfall are forecast.

Today should, however, see a rise in temperatures, with highs likely to go up by 5 or 6ºC compared to Monday. This will mean that snowfall will be limited to higher altitudes: 1,000 meters in the Pyrenees, for example, and 1,200 meters in central areas.

Waves measuring four to six meters high are expected today on the Valencian, Catalan, Balearic and Galician coasts, and strong winds are also forecast in Barcelona, Tarragon and in Aragón.

The next few days are likely to see the conditions improve, with less rainfall in most areas.