It’s Thursday night. Twenty students meet on a vacant lot near Madrid’s university area to initiate freshmen into the vagaries of college life. The roles are clearly defined. The veterans are well dressed and armed with cartons of cheap wine. The freshmen are wearing costumes and are already drunk. In one corner, a new student is on his knees vomiting while five others egg him on. “You’re going to keep on drinking until we see your dinner diced!” screams out one of them.

As September comes around again, so does this supposed rite of passage. Several weeks ago, the controversy over these initiation rituals surfaced once more in the wake of a viral video of an aggressive punch during one such session. Both parties, who were living at Complutense University’s Diego de Covarrubias student residence in Madrid, were suspended for two weeks.

If you have never been through it, it’s hard to understand why we don’t say no

“Suspensions don’t solve anything,” says Loreto González-Dopeso, the president of the support group No más novatadas (No More Hazing), which addresses complaints from students and parents of students who have been at the receiving end of these initiation ceremonies.

The group has received 40 complaints across Spain in the last year regarding rituals ranging from cold showers in the small hours of the morning to enforced drinking.

Laura Croas, a psychologist specializing in issues related to bullying, believes that the tradition persists because students are scared to report it, and because the victims figure that they will be the hazers further down the line. “You accept being a freshman because later you will be the veteran,” she explains. 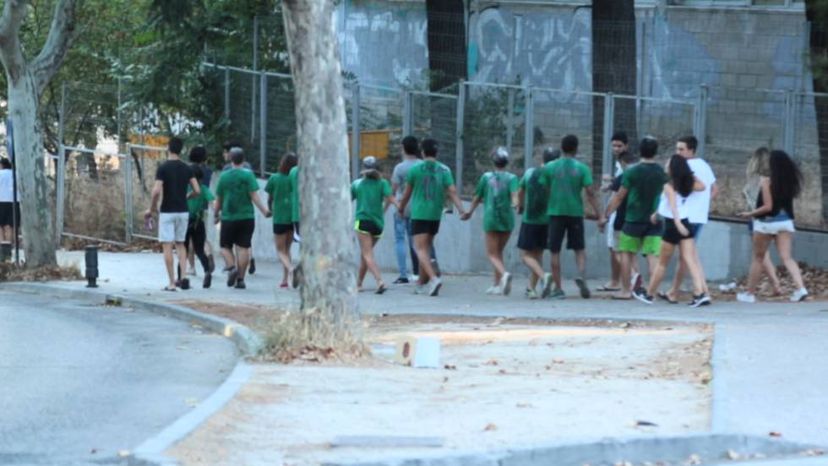 Croas says that although some of the rituals seem harmless, hazing plays on the victim’s emotions and can leave its mark. The most common problem among her patients is knowing how to say no.

“At that age, belonging to a group is all important, and you accept humiliations because you’re scared of the consequences if you don’t,” she says. “If you have not learned how to say ‘no’ for fear of being ostracized, that will continue to be a problem for you as an adult.”

Croas also shines some light on the veterans’ role and why hazing tends to go too far. “In group therapy, we can clearly observe our capacity as human beings to abuse power in an assumed role,” she says. “It’s an erroneous way of channeling the rage we carry inside us.”

At that age, belonging to a group is all important, and you accept humiliations because you’re scared of the consequences if you don’t

This is what is known as a power rush, and it comes with a thought: “I was once on that rung, but now I have climbed higher.”

Madrid’s Complutense University has launched its annual anti-hazing campaign this September together with the local police and city authorities. Other universities are trying alternative methods in a bid to phase out the practice. Salamanca University, for example, has opened an anti-hazing meeting point for the first time, where established students help the newcomers. “They feel more comfortable with one another,” says the vice-rector Ana Belén Ríos. “That’s the key.”

Extremadura University, meanwhile, has launched its first campaign with a focus on sexual harassment and food waste, in a nod to rituals involving coating newcomers in products such as flour.

“The phrase ‘the freshman is not a snitch’ still carries weight,” says Loreto González-Dopeso who insists that a lack of reported incidents doesn’t mean they are not happening.

For example, José (not his real name), the father of a former student in Madrid who moved after a year of being shunned by his classmates, says that he would have liked to have reported what was happening to his son but refrained for fear of making his life even worse.

Meanwhile, Lucas (also an assumed name), who used to live at the Covarrubias student residence, says that although he was humiliated, he was never the one making others suffer. “They were the typical macho guys who enjoy bullying the weakest,” he says. “The worst they did was make me eat my own vomit mixed with soup. If you have never been through it, it’s hard to understand why we don’t say no. It seems easy from the outside, but when you are part of it, you feel you have no choice.”

Not all students have bad memories of hazing, however. Rocío, for example, lived at the Marqués de la Ensenada residence and says that it was all quite tame. “They made us learn stuff about the veterans or get drunk,” she says. “But they never went too far.” Rocío believes that it is thanks to these rituals that strong bonds were forged with her classmates.