The heavy rainfall that has battered the southeast of Spain has claimed a total of six lives. On Thursday, two siblings died after their vehicle was swept away by a current in Caudete, in Albacete province. Meanwhile, on Friday, a man of Sub-Saharan African origin was unaware that a flooded underpass in Almería had been cordoned off due to the flooding and entered in his vehicle. The emergency services were unable to save him. Another man, aged 36, lost his life in La Jámula, an area of Granada. His body was located by a National Police helicopter some distance from his vehicle, which had been found hours before, according to municipal sources.

The body of a fifth victim, aged 58, was located on Friday night. The man, who had been missing since midday, was from Redován in Alicante and his body was found by a helicopter in an area close to Orihuela. On Saturday, a 41-year-old man was found dead in Orihuela (Alicante). 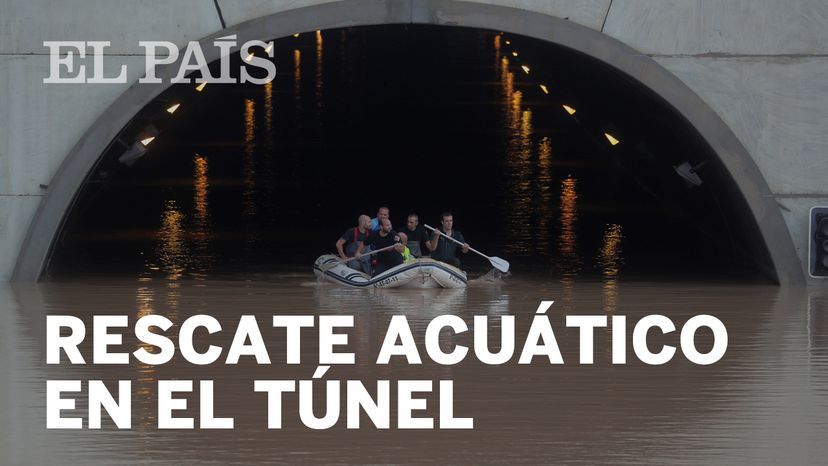 Video: A man is rescued from his car by emergency services using jetskis in a flooded tunnel on the AP-7 freeway, between Pilar de la Horadada (Alicante) and San Pedro del Pinatar (Murcia) (Spanish captions).

A slow-moving storm system has brought record downpours and gale-force winds to eastern Spain, causing flash floods, forcing hundreds from their homes and shutting down roads and schools across the region.

Known locally as a gota fría, literally “cold drop,” this weather event typical of the fall season – a sudden fall in temperatures along the east coast caused by the arrival of very cold polar air – is already being described as the worst since 1987.

The provinces of Valencia and Alicante and the Murcia region have been particularly hard hit. The government initially sent 200 soldiers and 100 vehicles from the Military Emergency Unit to Vega Baja, an area in southern Alicante that has been devastated by the flooding.

The town of Ontinyent in Valencia province recorded 250mm of rainfall in 12 hours, around 10 times the normal amount for this time of the year. The local river burst its banks, causing damage to buildings and forcing 140 people from their homes.

On Friday morning, authorities reported that the Segura River has burst its banks in Orihuela, a town of around 76,000 residents in Alicante province.

Winds gusting up to 100km/h ripped through coastal towns on Thursday and triggered three small tornados in Xábia, Dénia and Guardamar. More than 500 people have been evacuated in the Murcia region, and in Almería, the army is helping rescue around 70 people from a flooded campsite in Cabo de Gata national park.

Transit has also been disrupted across eastern Spain. At 8.30am on Friday the railway company Renfe announced it was halting service on its middle-distance trains to or from Valencia, Alicante and Murcia. Many roadways have been partially closed, including the AP-7 toll road and the A-31, as well as 37 regional roads.

Almería, Valencia, Alicante and Murcia remain on red alert and more than 300,000 students are staying home for the second day in a row. The storm is expected to move west towards Portugal and could bring heavy rain to Madrid over the the weekend.