The phrase “It’s not abuse, it’s rape” is painted in purple letters on a path leading to an abandoned factory in Torre d’en Vinyes, a small town in Manresa in Barcelona province. Six men aged between 19 and 26, and another 39-year-old man, are accused of gang raping a 14-year-old teen inside this warehouse on the night of October 29, 2016. While one masturbated, the others allegedly took turns penetrating the minor.

She’s afraid to go out, to school, and especially of the people around her

On Monday, the victim, who is now 17, and 12 other witnesses testified in court about what happened that night.

The men have been dubbed “La Manada de Manresa,” or the Wolf Pack of Manresa, for the similarities of the case to the high-profile La Manada rape trial, where five men were found guilty of raping an 18-year-old woman at the 2016 Running of the Bull fiestas in Pamplona.

The trial of the Wolf Pack of Manresa began last Tuesday with testimony from the seven defendants, who denied all charges. The public prosecutor has accused the men of the lesser charge of sexual abuse, but that could still be raised to sexual assault, as happened with the Wolf Pack case.

According to the prosecution’s indictment, the October 29 events being heard in the trial began at around 10pm, when 20 or so young people, many of them minors, gathered to drink alcohol at the old factory, located in a remote area near a university campus. In the middle of the drinking session, known in Spanish as a botellón, the defendants arrived.

One of the men, Bryan, knew the victim, according to the public prosecutor’s case. He was aware that she was only 14 years old and realized that she was barely conscious, after consuming a lot of alcohol and smoking marijuana. He took her to a nearby house and allegedly raped her there. When he was finished, he told one of his friends, Walter: “It’s your turn, 15 minutes each. Don’t take too long.” After Walter, Daniel David, Maikel, Marco Antonio and Yordanis are accused of raping the teenager, who had lost consciousness. Iván, instead of stopping the assault, allegedly masturbated while his friends assaulted the minor. 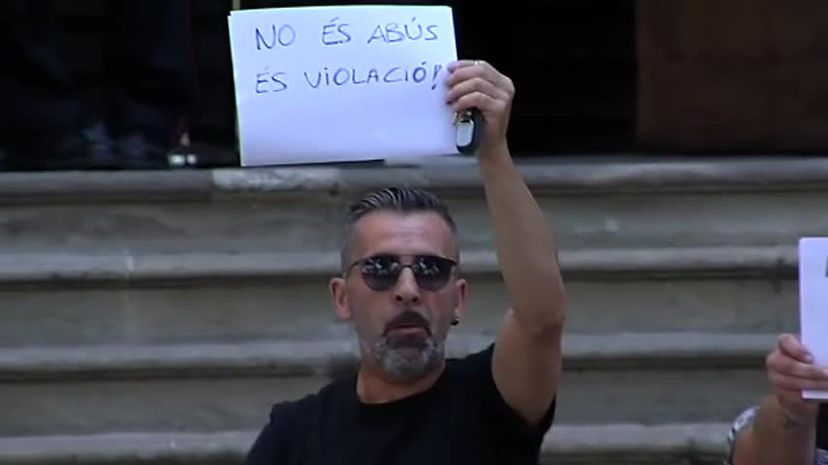 An uncle of the victim in the Manresa gang-rape case is held back by police as he tries to assault the defendants.(atlas)

When the men were finished, Marco Antonio grabbed a blank-firing pistol, and, according to the prosecutor, threatened the rest of the young people, who knew what had happened. “If anyone says anything, your family will have problems,” he warned, while brandishing the gun. He also threatened to tell their parents that they had met to smoke and drink.

At 3.30am, five hours after the party began, Bryan and Maikel returned, allegedly to rape the victim again.

The next day, the people who were at the factory told the victim, who remembered nothing, what had happened. On November 2, the 14-year-old reported the crime to the Catalan police force, the Mossos d’Esquadra, and was examined by forensic doctors at the Sant Joan de Déu Hospital.

“In another flash, I am crying and someone with glasses is on top of me. There were lots of people jerking off. The next day I woke up in the house [of her friend] Melodi, I unlocked my phone and Bryan called me to say that I was a slut and had fucked everyone,” she told the court. The victim said that Melodi told her that “the six men had penetrated me and I was crying.” The 17-year-old told the court that she walked to her uncle’s home, had a shower, and took the day-after-pill.

The victim, who cried throughout her testimony, said that she knew the men from other parties at the warehouse. She said that the first assault took place in a bathroom: “It hurt, I don’t remember any more.”

After the victim reported the crime, the seven men were arrested. As well as sexual abuse, Bryan is also accused of coercion and making threats. The other minors at the party maintained that Bryan called them during the police investigation and threatened to implicate them in the crime unless they kept quiet.

Only Daniel David was given pre-trial detention of 20 months. Although traces of his semen were found on the victim’s pants, he told the court last Tuesday that he did not have sexual relations with the 14-year-old. When asked how his semen ended up on her clothes, he replied: “I don’t know.”

Marco Antonio, like the other members of the Wolf Pack of Manresa, denied all the charges, including possessing a blank gun which he used to threaten the other people at the party. At the court hearing last Tuesday, Bryan admitted to knowing the victim and talking with her at the gathering. He then said she came on to him but he rejected her, and even claimed that the victim had called him to apologize after reporting him to the police.

According to the prosecution, Bryan maintained that the night of the crime a friend of the victim entered the factory, screaming that they were raping a young girl in the house next door. Bryan said he went to the house, with the other accused to see if she was okay. Yordanis claimed that when they approached the property, the victim left the house to say she was fine and went back inside. Yordanis said that the victim was with two minors, and that he heard one of them say: “I’ve already had sex with her.”

“She’s not making it up”

The trial of the Wolf Pack of Manresa continued last Thursday with testimony from six forensic experts, psychologists and psychiatrist who had treated the victim. All agreed that the minor “is not making [the assault] up.”

Psychotherapist Laura Rodríguez, who supervised more than 20 therapy sessions with the minor, told the court that “[the victim] feels completely overwhelmed [...] She’s afraid to go out, to school, and especially of the people around her.”

The court heard that the victim suffered anxiety and depression as a result of the sexual assault. Her condition improved after therapy but she relapsed once she knew the date of the trial. Investigators explained that the victim has a “complex” family situation: during her childhood and adolescence, she was cared for by her grandmother and also by state protection services.

According to her psychologists, she is scared that no one will believe her and continues to receive therapy three years after the assault.

The public prosecution is calling for Bryan to be sentenced to 12 years in prison for committing continuous sexual abuse, and another three-and-a-half years for three accounts of obstruction of justice.

The private prosecution, presented by the victim, has said the men are guilty of the more serious crime of sexual assault, and called for prison sentences between 15 and 20 years.