How much power does Catalonia have compared to other autonomous regions around the world? According to a recent study that analyzes data from 185 territorial entities across 81 countries, Catalonia comes out as a front-runner, though in some respects it could do better.

The regions covered by the research range from from dependencies and territorial divisions with scarcely any devolved powers to entities boasting a serious degree of self-government. In order to reach accurate conclusions, researchers considered: how many functions of governance came under the region’s remit and whether it has the power to legislate on them independently; what sort of governing body a region has and how it is voted for; and how much decision-making authority it has when it comes to taxes and borrowing. The study also measured the power a region has to influence the decisions of the central government of the state to which it belongs.

How much autonomy does Catalonia have?

In general terms, Catalonia has one of the highest degrees of autonomy. The research measures the extent to which a region is actually autonomous or simply the offshoot of a decentralized system. To a large extent, Catalonia has its own administration, which is independent from the state.

The two graphs below classify the region studied according to the extent of devolution enjoyed and the extent of its legal remit. When it comes to autonomous decision-making powers, Catalonia is in the leading group along with 45 other regions. The intermediate group of 96 regions includes the Basque Country and other Spanish autonomous regions. Then, in the bottom group, there are 43 members with the least decision-making powers; this group includes Venezuela’s decentralized states. 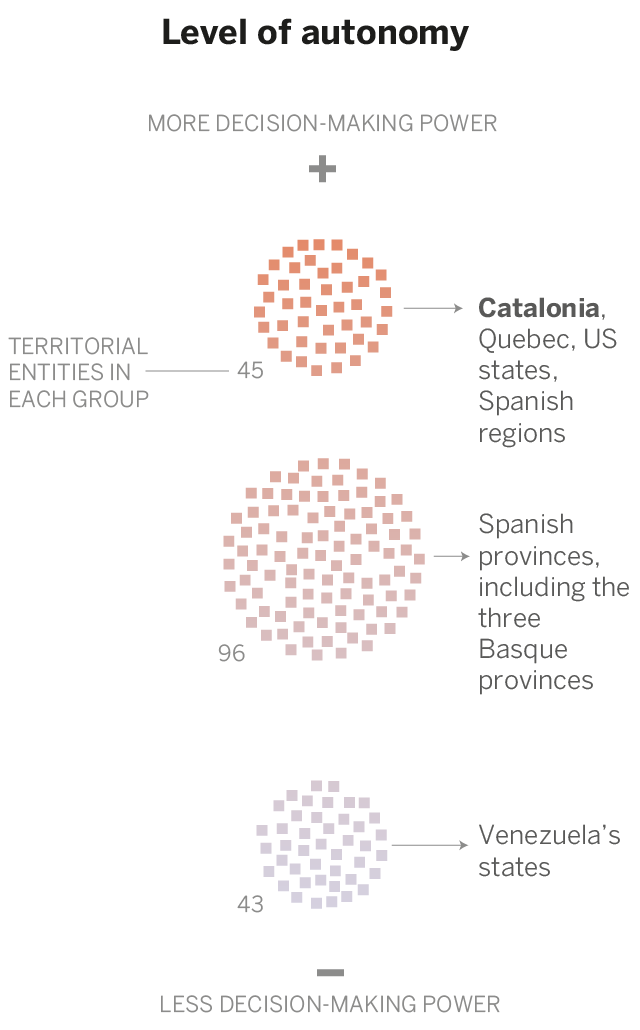 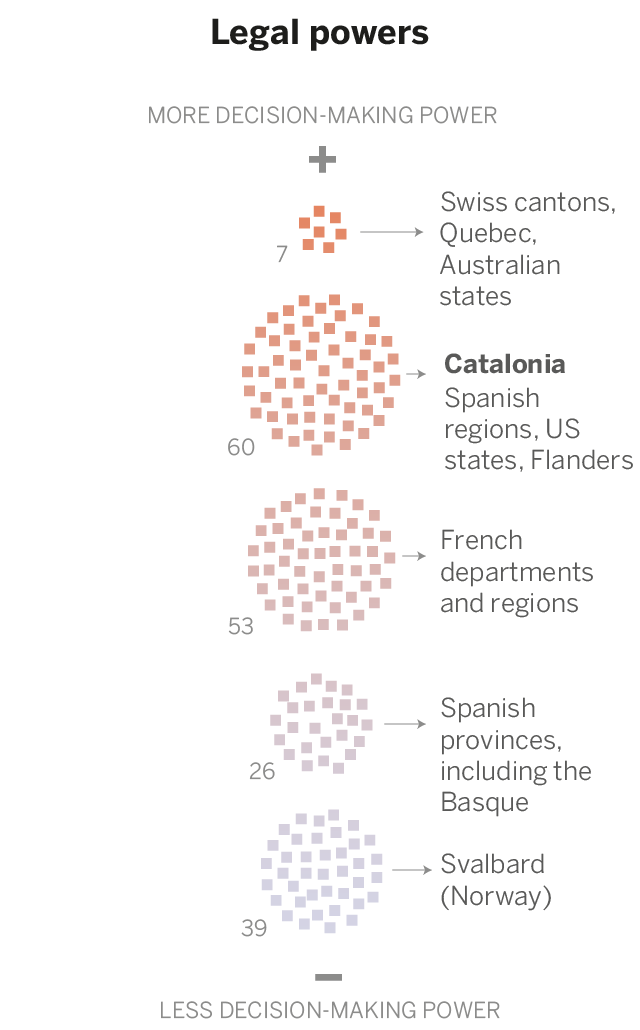 Catalonia and the rest of Spain’s autonomous regions share the distinction of being among the most decentralized regions in the world, ahead of many of Europe’s decentralized regions. According to the study, Quebec also shares this privilege, along with the US states, the Austrian and German Länder, Scotland and Flanders.

Concerning the extent of their economic, educational and social remit, Catalonia and the rest of Spain’s regions fall into the second-highest category of five possible levels, together with Flanders and the US states. Ahead are the Swiss cantons, Australia’s states and Quebec, which also have powers over immigration and residency.

How are the main self-governing bodies elected?

Having autonomy doesn’t always mean that government bodies are directly elected by the region in question, but Catalonia has an advantage in this respect as do the other autonomous regions in Spain. The study measures to what extent regions have their own legislative and executive powers and if these are elected directly. In the case of executive powers, direct election and election via an assembly election are considered the same. 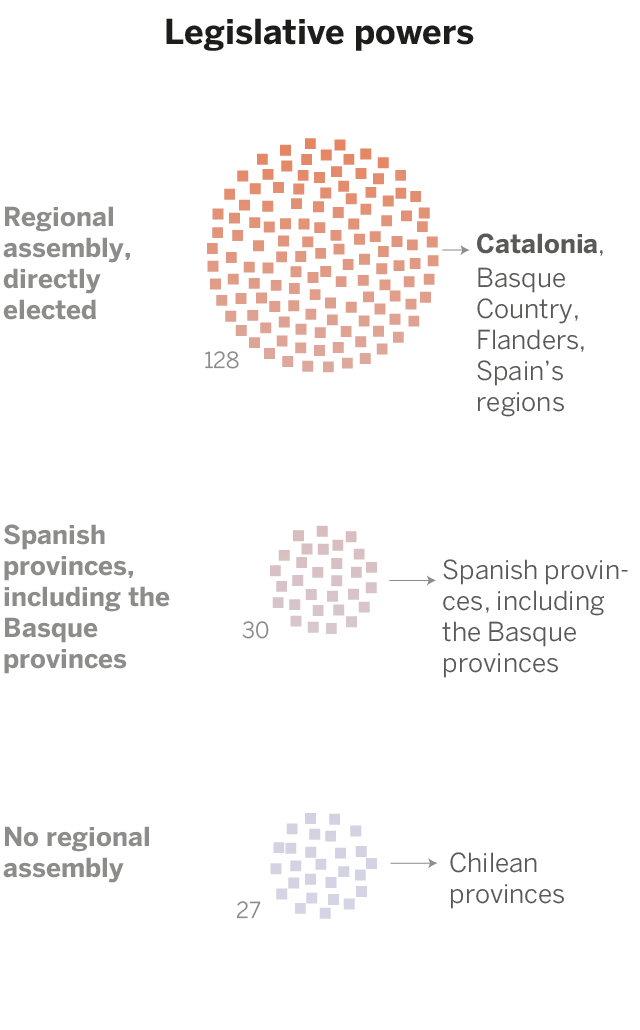 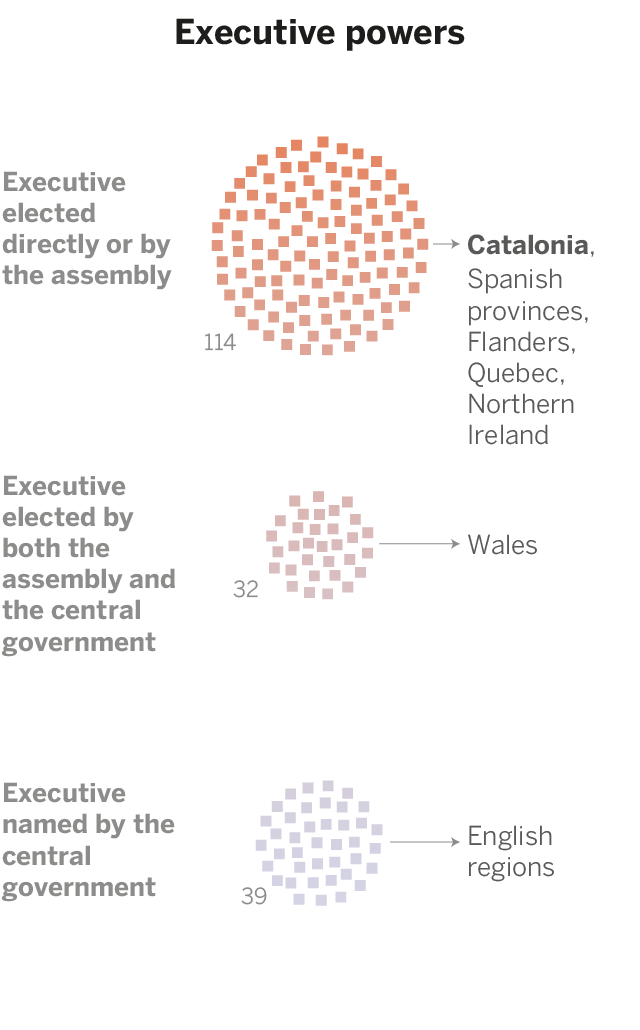 Catalonia has its own assembly: a directly-elected parliament. The parliament selects the executive. This system is the most common among such regions globally – 100 of the 185 studied share this system.

The Regional Authority Index (RAI) study compares the powers enjoyed by 185 regions in order to analyze the authority of the region and their potential influence on the central government both multilaterally – in the case of being one region among many having these powers – and bilaterally – a region that has greater autonomy than the other regions in the country. The article is based on a regional legal data from 2010. A book containing all of this data – ‘Measuring Regional Authority: A postfunctionalist theory of governance’ – was published last year.

Particular attention is given to Spain, analyzing both provinces and regions, dedicating specific sections to Catalonia, the Basque Country, Navarre and Galicia, due to their extraordinary powers. Andalusia was not considered distinct from Spain’s other regions in this respect for the purposes of the study.

The study considers regions with similar remits within the same country as a generic group, such as the French regions and the German Länder. Spain's three Basque provinces, which have extraordinary powers in certain regions, do, however, merit individual study.

Merkel, Macron and May show support for Spain over Catalan crisis

Spain and Catalonia: a brake on economic growth