His hands were gray and swollen the morning he was found. They were tied behind his back with a rope and half his body was covered by a trash bag. The bottom half was exposed, with his underwear and pants pulled down to his knees. No one knew anything about the dead man. But he was not the only corpse to be found last Wednesday. Ten minutes later, two other bodies were discovered at the other end of Guadalajara, one of the most important state capitals in Mexico. From early in the morning, death and brutality are uncovered in city’s ditches and verges, on dirt tracks and sometimes right on the sidewalk. They are daily, anonymous and unpunished crimes that rock both the poorest and richest neighborhoods of Guadalajara, the heart of Mexican culture and tourism.

About three kilometers from where the first body was found, a group of men dressed in pale blue and white polo shirts can be seen chatting around a golf hole in the luxury residential area of Las Cañadas, in Zapopan, a district in the city’s metropolitan area. Nearby, a perfectly groomed golden retriever runs gracefully away from a woman cleaning one of the huge houses that looks out onto the freshly mowed lawn of the golf course. In Las Cañadas, there are swimming pools, parks and even a shopping mall, saving residents the trouble of leaving the complex unless they wish to. Those who do so run the risk of finding a trash bag containing the tortured body of a victim that the killers made no effort to hide.

Like most of the country, Guadalajara has been living with these two parallel realities for years. The well-off have trusted that gang violence would remain confined to the poorer neighborhoods and that shootouts would not reach their well-paved sidewalks, which lie just a few minutes by car from the battleground where thousands of the “disappeared” are buried. May suburbia be spared from bullets.

Guadalajara, the capital of the state of Jalisco, is the third most important city in Mexico after Mexico City and Monterrey. It has five million inhabitants in its metropolitan area, is home to the most important Spanish-language book fair in the world, the Guadalajara International Book Fair, and is the main urban center for the central and northwestern states of the country. Indeed, for a long time the government ran an upbeat campaign designed to attract the most important technology companies in the world, turning the city into the so-called Mexican Silicon Valley.

But as well as being the birthplace of mariachi folk music and tequila, it is also home to Mexico’s most powerful cartel, the Jalisco New Generation Cartel (CJNG). Its leader, Nemesio Oseguera Cervantes aka El Mencho, has become one of the US Drug Enforcement Administration’s (DEA) most-wanted men. Using Guadalajara as a base, he has spread his tentacles across Mexico to take control of the country’s organized crime. But his authority in the underworld has not gone unchallenged. The city is the site of a war being waged against him by a splinter group, now financed by the Sinaloa Cartel, called the Nueva Plaza Cartel. It is a battle that is keeping most of the municipalities surrounding the capital under siege: dismembered, bagged and tortured bodies appear daily in these areas.

From time to time, the war breaks through the fragile boundaries protecting the wealthier communities to strike at the financial and political heart of the capital. Just a week ago, one such episode shook one of the city’s most upmarket areas, playing out like an exaggerated spoof on a Hollywood gangster movie.

Moving with the synchronicity of a military battalion and wielding assault rifles, an armed gang moved towards Los Otates, a traditional restaurant in the Andares shopping center in Zapopan. While several members of the gang burst into the restaurant to seize their victim, others fired from outside as if the restaurant were a military target and not a family establishment offering Mexican food.

Wearing bulletproof vests, the armed men retreated after a dramatic shootout, loading a dying man into the back of a pickup truck. They then fled, dumping their fatally wounded companion at the door of a clinic where he died before any attempt could be made to save his life. What is most astounding about this episode is that as this armed gang made their way across almost 10 kilometers of the city past surveillance cameras and through police-patrolled areas, no one stopped them. Not a single person was arrested. It was a gunfight that ended with one dead, two injured waiters and a missing person about whom no details have so far been released by the authorities. More than a dozen armed men got away scot-free. 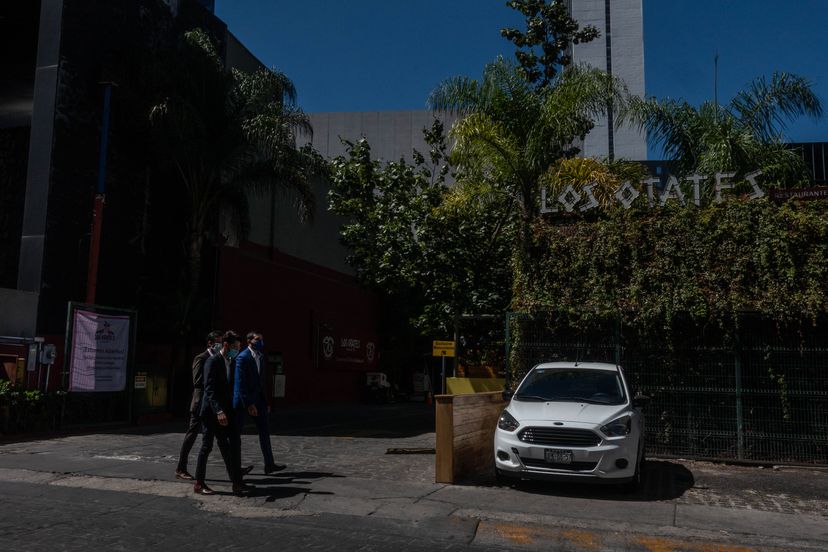 “It generates fear,” says the owner of Los Otates restaurant, Bernardo Padilla, six days later. “It was such bad luck that the guy they were coming for was here. Luckily, we have received the solidarity of the business and hostelry sector and they have supported us in this difficult time.” Already struggling to keep afloat with the temporary closures due to the coronavirus crisis, Padilla is faced with a new challenge: “Now we also have to factor in a lack of safety and the bad image that’s come from an event that had nothing to do with our business,” adds Padilla, whose grandmother founded the restaurant 71 years ago.

In the Guadalajara metropolitan area, which includes eight municipalities besides Guadalajara – Zapopan, Tonalá, Tlaquepaque, Tlajomulco, El Salto, Juanacatlán, Ixtlahuacán and Zapotlanejo – 1,553 murders were committed in 2019, amounting to more than four a day. In 2020, at the height of the pandemic, this figure dropped very slightly to 1,369. The Jalisco state government, led by Enrique Alfaro – a staunch opponent of Mexican Prime Minister Andrés Manuel López Obrador – celebrated the drop in homicides last year, ignoring the macabre fact that victims are often not found and therefore not counted in the official toll. In the past two years alone, 406 victims have been discovered in clandestine graves.

Just a week ago, shortly after the Zapopan shooting, up to 18 trash bags with human remains were found in front of the Chivas soccer stadium in the same municipality. Eight days later, forensic experts were still piecing together the different human arms, heads and legs. Last Thursday, the authorities confirmed that there were six victims, although they were only able to identify two, both of whom had been reported as missing. None of these bodies appear in Guadalajara’s murder figures.

Lower profile than the Zapopan shooting was a shootout on February 3 witnessed by the Flores family and that pockmarked the humble façade of their home in Tlaquepaque. A week before the restaurant gun battle took place, a van loaded with rifles, grenades and bundles of cash hurtled through the maze of haphazard streets in the Lázaro Cárdenas district. Inside the van, four men were prepared to die in a battle with members of the National Guard – the new military and civilian corps set up by López Obrador – who were hard on their heels.

As Luis Manuel Flores, 57, tells EL PAÍS: “The slippery customers didn’t take into account that this street is a dead end. And when they reached it, bang, the soldiers descended on them.” Flores indicates a point no more than five meters from the room where he was sleeping that night with his wife. From the window, he watched the National Guard surround the gang of four right outside his house on the corner of a street no more than 10 meters wide.

Right there, three of the four men in the van were riddled with bullets that left their bodies unrecognizable. “I’m telling you, they shot at such close range, that their heads looked like flowers in bloom,” says Sagrario Pérez, 32, Flores’ daughter-in-law, who holds up the photos she took with her cellphone.

From under their beds, behind the closed doors of their rooms, frozen with terror, the family heard the last of the men being shot. “He was all shot up and he was laughing,” Pérez adds. “He wouldn’t stop laughing. He looked like the devil.”

Flores says that he heard the man shout at the police: “I don’t give a fuck!” His neighbor, Jessica Guadalupe Rivera, 26, says: “He wouldn’t stop shooting. I think he had a rifle in each hand. While the soldiers were loading, he didn’t stop. It was like he was crazy.” The man was shot dead, his body riddled with bullets, and the neighbors had to sweep the remnants of brains and bones from in front of their homes.

Flores’ blood sugar count went up to 500 as a result of the shootout and he hasn’t been able to see out of his left eye since. Nor can any of them stop thinking about the maniacal laughter. Meanwhile, the children use a broom to pretend they are shooting at their neighbors and shout: “Stop! National Guard!” Yet no one from the authorities has approached this marginalized neighborhood to address the destruction caused by the brutal confrontation between the narcos and the National Guard. Neither the Attorney General’s Office nor the federal government has released any information on the incident. In this corner of Guadalajara, locals are living in a crisis that transcends the coronavirus pandemic; there is not a single mask to be seen.

From his car, José Luis Escamilla, a crime reporter for the radio station Notisistema, is listening in to the state police’s radio communications. Escamilla has learned, like all crime reporters in the Jalisco state capital, to decipher the police codes. For example, at 11.54am on Wednesday, February 17, “57-13 at Gigantes and Doctor Pérez Arce” means a man injured by a firearm; “97” means they are calling for an ambulance as he is in serious condition; “69” is a death and a “39-93” is a suspicious object – “always bagged or wrapped bodies,” Escamilla explains.

The reporter says it is not that there is more work now than before, as victims have been piling up over the past four years, starting when the war between the local cartels kicked off. “What is surprising is that nothing is done,” he says, referring to the fact that in one of the most important cities in the country, crimes are committed with all but absolute impunity.

At 9.46am on Wednesday, February 17, the police were alerted by radio of a suspicious object. “Male. Tied hand and foot, covered with a a plastic bag from head to waist.” The corpse was lying on the road to Saltillo, a few minutes from the golf club in Las Cañadas. If the perpetrators had wanted to hide the body, they would only have had to push it a few meters into a rocky ravine.

But the body with the huge gray hands lay in the ditch for all to see. Only a day before, and on that same bend, two other bodies were found, one tortured and bagged and another a bullet to the brain. The killers didn’t have to bother to think about where to hide the corpses. Any corner of the Guadalajara metropolitan area of Guadalajara is safe for them.

MIGRANT ROUTES TO THE USThe Tamaulipas massacre: how the American Dream dies in Mexico
AMERICASThe underground lair of La Luz del Mundo’s ‘apostle’
The Spanish narco who wanted to be Pablo Escobar
AmericasA tight spot for the 34 million Mexicans living in micro-apartments