Widad can’t resist moving her head to the rhythm of the song Con Altura whose music video shows five dancers in skintight clothes performing with Spanish singer Rosalía. A 34-year-old German woman, Widad controls the television showing the music video that is also being watched by five other Western women who sit crosslegged in a tent in the Kurdish-run Al Roj camp for the families of Islamic State (ISIS) fighters in northeast Syria. Painted lips, multiple earrings, dyed red, straightened hair, jeans and elegant shoes contrast with the sea of abayas (a long loose-fitting robe) in the surrounding 800 tents, which are guarded by the Kurdish-Arab militias allied to the international coalition. “Last March 8, on Women’s Day, we decided to take off our veils,” says Widad, who has four young children fathered by two jihadist husbands.

Two of the women nod, while Shamima Begum, 21, whose British nationality has been withdrawn for belonging to the terrorist group, says she removed her face veil more than a year ago. These will be the only words uttered by this young woman who, at the age of 15, ran away from high school to board a plane that would take her to the self-styled Islamic State, otherwise known as the caliphate. “My lawyer has forbidden me to talk to the media,” she says after posing coquettishly in front of the camera in a black leather cap, sunglasses and leggings.

The women in the camp stoned me and hit me on the head with a hammer
Nawal, 35-year-old woman from the Netherlands

“I took it off a year ago too!” says Huda, a 26-year-old Yemeni-American. “First I was oppressed by my family, then by ISIS and then by the women in this camp.” As she speaks, she puts on a red headband and applies makeup using her cellphone screen as a mirror. Three of the other four women have also dispensed with the veil in a twist as radical as the one that led them to don a black niqab (face veil) and abaya in the first place after traveling to Syria as Jihadi brides. “The change doesn’t happen overnight,” says Widad.

The women deny that removing their niqabs is a strategy recommended by their lawyers to help in their bid to be repatriated to their countries of origin. “It’s not a question of promoting a favorable image to influence public opinion because we are putting our lives in danger,” says a young Western woman who requests anonymity.

“The women in the camp stoned me and hit me on the head with a hammer,” agrees Nawal, a 35-year-old woman from the Netherlands and the only one of the six who has decided to keep the veil while removing her abaya. “They threatened to burn me alive if I didn’t cover up again,” adds Huda.

All of them now depend on the Kurdish militia women who guard the Al Roj camp for protection.

Like most of the jihadists imprisoned after the fall of the caliphate in March 2019, these women argue that they were tricked into making the journey to Syria; lured along with their husbands by ISIS propaganda to “defend their Syrian Muslim brothers who were being killed by the regime [of Bashar al-Assad].” They argue that once inside the caliphate, “it is impossible to leave.” Nawal, from the Netherlands who has been in Al Roj for the last four years after spending two with ISIS, points out: “I have been in this camp longer than I was in the caliphate.” 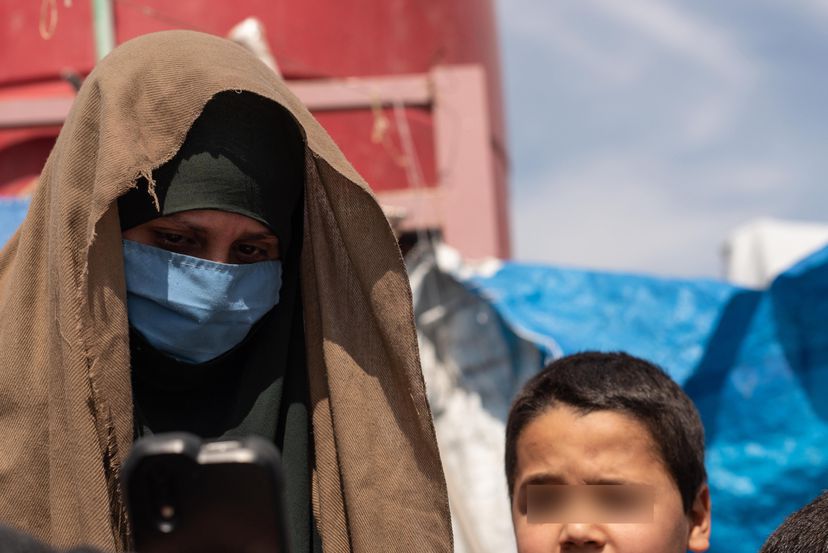 Luna Fernández Grande watches at a message on her cellphone sent by her mother (Spanish audio).NATALIA SANCHA

The dusty oasis of Al-Baghuz Fawqani became the caliphate’s tomb two years ago after the Syrian Democratic Forces – the opposition alliance dominated by Kurdish militias – and the international coalition declared victory over ISIS. Luna Fernández Grande and Yolanda Martínez, from Madrid, were transferred to Al Roj from Al-Baghuz Fawqani after several months in the notoriously radical Al Hol camp.

“I’m not going to discuss my choices; I’m tired,” says Grande, who agreed to give EL PAÍS a second interview 24 months after the last one she gave on leaving Al-Baghuz Fawqani. She is asking for her eldest son, Abdurrahman, 13, to be returned to her from the juvenile correctional facility he was transferred to last month. “If there is any mercy, they won’t separate children from their mothers; considering Abdurrahman has been through war and lost his father; considering the only family he has left is his mother and siblings,” she says, looking away from the camera.

Having grown up in a shelter in Madrid, Grande says she does not want her son to go through what she has been through. Silently, she watches a video that her mother, Manuela Grande, has sent from Madrid, encouraging her to be “strong for the children.”

Asked about her share of responsibility for bringing four children into a war and giving birth to a girl in the same tent she lives in today, she remains silent. “If Spain doesn’t want us, they should open the doors of this camp and let us go free,” she says. “I don’t want to return to Spain if I have to serve a prison sentence and be separated from my children; I just want to be with my children, I don’t care where.” She then says goodbye at the door of her tent where she also looks after four Spanish orphans whose jihadist parents died in the battle of Al-Baghuz Fawqani.

Let them at least take our children. It is not fair that they are paying for our mistakes
Young woman at Al Roj who wished to remain anonymous

Yolanda Martínez, who refuses to be interviewed, has only a few words to say: “I want to be with my children and my husband who I have not seen for three years and who I have no news of.” Omar Al Harshi is the father of her four children, all minors and prisoners in Al Roj. He is one of only two Spanish jihadist fighters who have been identified in Kurdish prisons.

A Madrileña who grew up in the upmarket Salamanca district, Martínez says that she has done “nothing other than take care of the children and the home” during her five years in the caliphate. However, Hala, who is in charge of security in the camp, says: “Yolanda is dangerous; she hooks up with the most radical ones in the camp.”

Three Spanish women and 18 minors ended up in ISIS family camps. Three of the minors have been missing since February 2020 after their mother, Moroccan Loubna Fares, orchestrated their escape from the Al Hol camp. Romina Sheer, the widow of a jihadist who played an important role in spreading ISIS propaganda, lives in a tent near Martínez with her three children. German, with a Spanish father, she has asked to be repatriated to Spain to join her mother.

Al Roj not only has less problem with overcrowding than other camps, but the women are less violent and the tents are much better equipped, fitted with televisions, satellite dishes and electricity. The foreign jihadist women have a market where they go to buy food and other goods after picking up monthly transfers from their families at a point that acts as a makeshift bank. These transfers are limited to between €300 and €400. Small blond, red-haired and blue-eyed children run about on tricycles amid a sea of colored abayas, as the camp’s administration has banned the color black which dominates the landscape in the Al Hol camp.

We are prisoners in this camp and as prisoners, we are entitled to a fair trial
Nawal, who has been in Al Roj for the last four years

“We escaped from the caliphate in 2017, taking advantage of the chaos that ensued after the fall of Raqqa [the once de facto capital of the caliphate],” Widad says from her tent. The six women take the opportunity to launch an appeal to their respective countries, asking to be repatriated and tried. “We are prisoners in this camp and as prisoners, we are entitled to a fair trial,” argues Nawal.

“Let them at least take our children. It is not fair that they are paying for our mistakes,” says the young woman, who refuses to be identified and claims to have been the victim of long-term abuse in her childhood. “Every woman in this camp has her own story. Many are radical, but many others can change because when we came here, we were fleeing a traumatic past.”

“What happened, happened,” Widad says. She insists that they no longer pose a danger to their societies and that they are willing to help their governments deradicalize other women.

Today, these six women represent a small minority among the more than 40,000 women held captive in the camps. Ideologically, they claim to stand outside of ISIS and are calling for their release from Al Roj so they can stand trial in their countries of origin. “We are also victims of ISIS,” they argue. And, like the rest of the corralled jihadist women, they deny having participated in the crimes committed against the Syrian and Iraqi women and children, and the thousands of Yazidis from northern Iraq, who over five years were kidnapped, raped and killed in the name of the caliphate and its black flag.

With the collaboration of Khabat Abbas.