A wildfire in Torre de l’Espanyol, a municipality in the Catalan province of Tarragona, continues to burn out of control after devastating more than 4,000 hectares in the municipality and surrounding areas in Vinebre, la Palma d'Ebre, Flix and Maials. Authorities have warned that the fire has the potential to consume 20,000 hectares of land.

Firefighters from the Catalan region are trying to contain the fire, which broke out on Wednesday. The regional conservation office, Agents Rurals, believe that the fire was started after manure spontaneously combusted on a farm in Torre de l’Espanyol.

Miquel Buch, the head of the regional interior department, said the firefighters are using different strategies to control the tongue-shaped fire. On the left flank, they are waiting for the flames to reach the C-12 highway. At 10am on Thursday, the fire brigade confirmed that this side of the fire had stopped just in front of the road and not spread to the other side. But it is the right flank of the fire that is of most concern. “It is not at all controlled, because due to the terrain only land units can access [the fire] and this makes the operation more complicated,” Buch told radio station Catalunya Ràdio.

Buch also confirmed that conservation officers had said that the farm in Torre de l’Espanyol was the origin of the fire. It is likely that the recent high temperatures led the manure, which is highly flammable and was not being stored in the legally required conditions, to spontaneously combust. Both Buch and Catalan premier Quim Torra have gone to the scene of the fire.

The head of the Catalan Fire Department, David Borrell, said it was hard to “be optimistic” about putting out the blaze, given the difficulty of the operation. “The terrain is complicated, this generates a lot of difficulties, the weather conditions are not favorable. This means we are overwhelmed and are having to work very hard to achieve our objectives,” he said in an interview with Catalunya Ràdio. Borrell explained that all available resources and firefighters are being used to control the fire, and more support is on the way. “The problem is not so much the resources available but rather the difficulty of the terrain and the weather conditions,” he said.

Fire chief Manuel Pardo told Catalunya Ràdio that it had been a “very hard” night, confessing that the team had believed the fire would be under control by Thursday morning but that this had not been possible.

While temperatures fell and humidity levels rose overnight, firefighters are expecting more high temperatures on Thursday, which could lead to a situation of “extreme risk,” they said. Spain’s AEMET weather service has forecast that the heatwave affecting most of the country could last until Sunday.

Around 80 ground teams have been working since the early hours of Thursday morning to control the blaze. From dawn, they were joined by seven air units, with two helicopters, three firefighters and two airplanes for surveillance and action. The emergency military unit also arrived at the scene on Thursday morning, equipped with 120 members and nine vehicles from the Intervention Battalion. Two water bomber airplanes will later join efforts to put out the blaze. 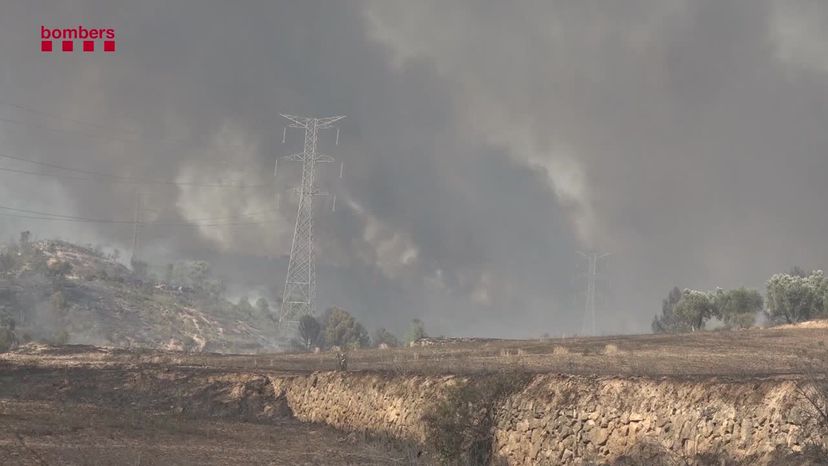 More information >
EnvironmentSpanish government rushes to reform “out of date” rules before forest fire season begins
WEATHERHeatwave arrives in Spain, with 32.5ºC in parts of Mallorca before 9am