Spain’s light pollution problem has become so bad over the past 10 to 15 years that light from the country’s biggest cities can be seen from hundreds of kilometers away. Recent scientific studies have drawn attention to the problem with striking images that capture the light pollution emitted by Spain’s major cities. The only exception is the Canary Islands, which has introduced legislation to protect the skyline.

While Madrid and its satellite towns emit light that can be seen from the tip of the peninsula, Bilbao in the Basque Country is the city with the most light pollution, according to new research led by Spanish astrophysicist Alejandro Sánchez de Miguel in collaboration with Rebeca Benayas Polo, from GEASig, for SaveStars Consulting SL.

The pollution has got so bad that it is not only affecting our view of the stars, it is also having a major impact on the environment – excessive light directly affects our health, and the flora and fauna around us, particularly pollinating insects and bird species whose habits have been disturbed by the artificial nighttime light. “We’re not the only astronomers in the animal kingdom,” says Sánchez, co-author of the study Ranking of the Light Pollution of Spain, which has recently been published by the European Scientific repository Zenodo. “This is now a major environmental problem.”

The study analyzes the situation in 2,000 Spanish districts, taking into account different aspects, such as the number of street lamps per square kilometer and output per person. According to the research, Madrid emits the most light into the sky and is the worst culprit due to its sheer size. However, size appears to be irrelevant when it comes to the runners-up: Zaragoza, Seville, Barcelona, Valencia, Murcia, Málaga, Cartagena, Vitoria and Córdoba. 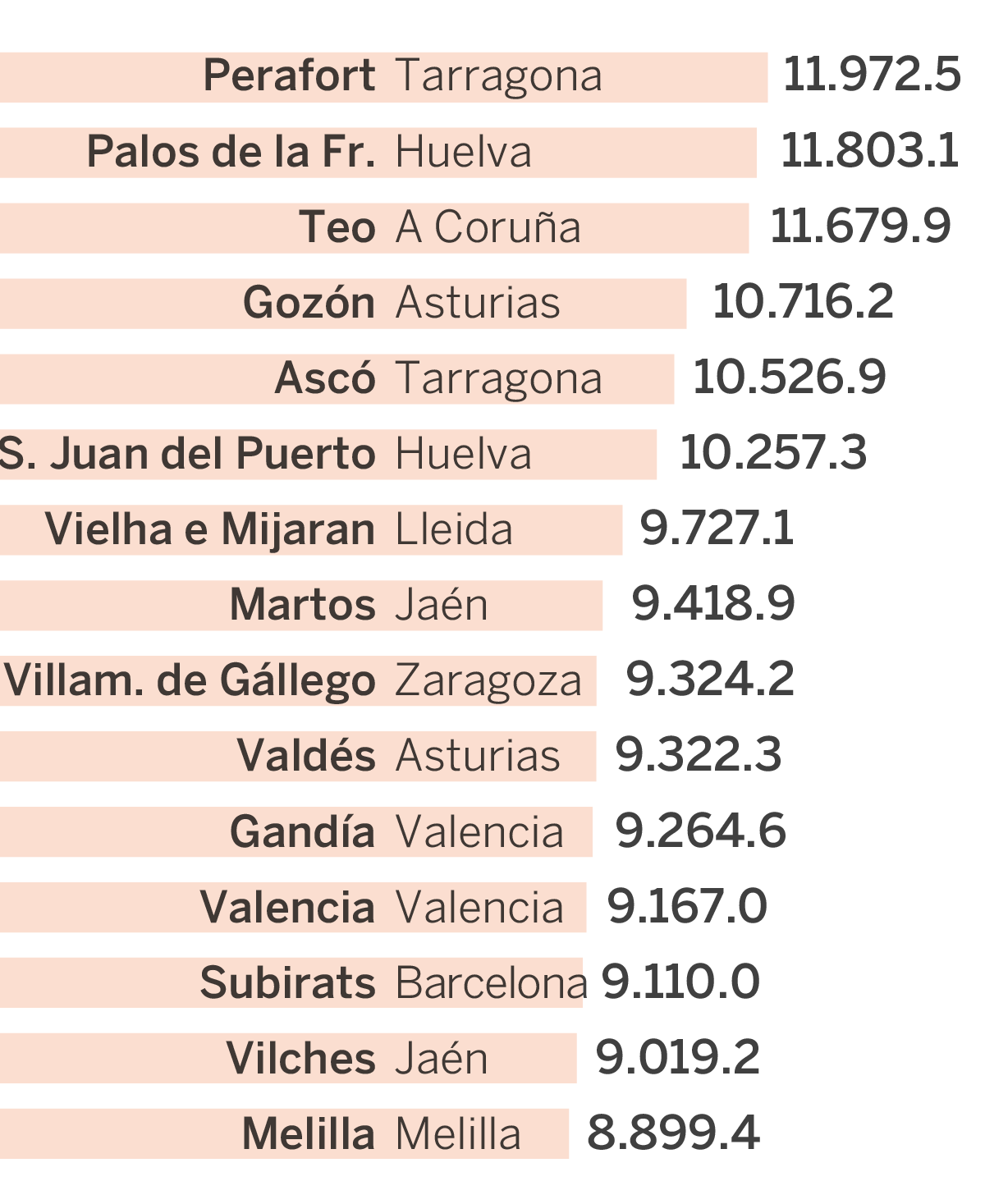 However, Bilbao, Valencia and Barcelona are the worst culprits in all categories under analysis. In these three cities, light pollution is exacerbated by the large size of the city, as well as the type of lighting, the number of street lights and power emitted per square kilometer. In this last category, the worst performers were actually smaller cities and towns – Perafort (Tarragona), Palos de la Frontera (Huelva), Teo (A Coruña), Gozón (Asturias) and Ascó (Tarragona),

Sánchez’s study has had to use data from 2012 as the Visible Infrared Imaging Radiometer Suite (VIIRS) – a detector installed in international satellites which measures light contamination – is unable to detect blue light which means it cannot read contaminating emissions from LED light bulbs, which have become very popular in Spain over the last five years. To get more accurate results, Sánchez has based his research on 2012 data with the implicit understanding that the current light pollution is far worse, despite the fact the VIIRS, which is blind to LED lighting, suggests it has got better.

While LED lighting is believed to be more efficient, this has been contradicted by the financial and environmental cost as most of the light bulbs have a color temperature that wavers between white and blue and usually exceed 4,000 Kelvin degrees, meaning the pollution is worse.

The European Union’s Joint Research Center suggests that if LED lighting is used, the bulbs should have a color temperature less than 3,000 degrees Kelvin, while scientists recommend an even lower figure of 2,200, which means they should be amber instead of white. But despite these recommendations and the example of the Canary Islands, which uses extremely efficient and non-polluting amber bulbs, many local councils continue to opt for white LED light bulbs.

The shift to LED has cost Spanish towns €600 per street lamp. Sánchez states that it would make far more sense to use sodium bulbs which cost just €12 each, are equally efficient and do not contaminate if they are fixed in such a way that the light shines downwards. However, this option is far less profitable for the suppliers. It is estimated that more than €1.6 billion of public money is spent every year on street lighting.

Skylines that are just too bright

Alejandro Sánchez, author of one of the first PhDs on light pollution, is also behind the Cities at Night project, an international initiative to raise awareness of the impact of light contamination using photos taken at night by the International Space Station (ISS).

Photos of Earth taken by the ISS astronauts could serve to more precisely measure the impact because, unlike VIIRS (Visible Infrared Imaging Radiometer Suite) images, they can capture LED lighting.

However, the photos do not need to be taken from beyond our planet. Images taken on Earth itself are also proving useful.

Amateur astronomer Joan Manuel Bullón has been working on an atlas of light pollution in Spain and a project called Lost Horizons Versus Dark Skies and some of his most recent photographs are striking, such as those taken this winter. In order to measure the quality of our view of the stars, Bullón has taken photos from different points in Spain using a camera with a special fisheye lens that offers a spherical view of the world.

These photos have allowed Bullón to trace enormous arcs of light pollution on the map from numerous Spanish cities. The contamination from street lights from the big capital cities appear on the sphere like a halo, and can be captured even at a distance of 500 kilometers.