Key events of the day

The Catalan premier, Carles Puigdemont, has failed to clarify whether or not he declared independence at a plenary session of the regional parliament last Tuesday.

Following a deliberately ambiguous statement that declared secession, then immediately placed it on hold, the central government had formally asked the Catalan leader to clarify his position within the space of five days, or face a partial suspension of home rule through the use of an obscure constitutional provision known as Article 155.

The deadline ended Monday morning. But in a letter to Madrid whose contents have been revealed by the Catalan radio stations Catalunya Ràdio and RAC1, Puigdemont fails to answer the question clearly.

The radical far-left CUP party that is supporting Puigdemont’s minority government made a formal request late last week demanding “the proclamation of the republic.” Their letter stated that this is the only way for Catalonia to be seriously recognized in the event of an international mediation.

Meanwhile, High Court Judge Carmen Lamela had to decide whether or not to grant the request of the public prosecutor to hold the chief of the Catalan police force, Josep Lluís Trapero, in prison without bail. Trapero appeared in Spain's High Court in Madrid today for the second time, on charges of sedition.

At around 6.20pm, news broke that Trapero would not have to be held in custody, and was released under precautionary measures.

That concludes our live coverage for today of events in Catalonia and the rest of Spain, we will be back on Tuesday morning with an update of the latest news.

High Court judge in Madrid has decided not to jail the chief of the Catalan police force, Josep Lluís Trapero, who is being investigated on sedition charges.

Car manufacturer Seat, which has a factory in Martorell (Barcelona), has decided today to postpone the date that it will announce the name of its new SUV, which will be launched in 2018.

The brand is famous for choosing Spanish place names for its models, and as such has decided that now is not the best time to make the new model name public given the political tensions in Catalonia, company sources say. Reporting by Lluís Pellicer.

The Civil Guard claims that Trapero gave instructions to his subordinates so that officers would not close down polling stations on the day of the referendum, despite orders from a judge to do so.

Mossos chief Trapero, superintendent Teresa Laplana, and the leaders of the major organizers of the pro-independence movement, Jordi Sànchez of the ANC, and Jordi Cuixart of Òmnium, all appeared in the High Court today on sedition charges, 10 days after first being questioned by the judge.

Documentation supplied by the Civil Guard to the judge states that Trapero is "completely involved in the separatist process."

From 6pm, High Court Judge Carmen Lamela will be deciding whether or not to grant the request of the public prosecutor to hold the chief of the Catalan police force, Josep Lluís Trapero, in prison without bail. Trapero appeared in Spain's High Court in Madrid today for the second time, on charges of sedition.

The charges relate to his actions on September 20, when National Police staged a number of raids in a bit to seize material destined for the October 1 illegal referendum in the region.

The governing pro-independence coalition in Catalonia Junts pel Si (Together for Yes) and its far-left ally CUP cannot agree on a shared position regarding the declaration of independence. The parties have postponed a session of parliament originally meant to be held this week. The anti-capitalists believe that the Catalan house should convene no later than Friday of next week, Àngels Piñol reports.

Barcelona Mayor Ada Colau made a public request on the program "Al rojo vivo" for Catalan premier Carles Puigdemont to admit that there has not been a unilateral declaration of independence.

The head of the Basque Country’s High Court, Juan Luis Ibarra, lamented the effects on the justice system of the “sustained unconstitutional actions” by the Catalan government and its goal of achieving “a territorial judicial power far removed from the concept of judicial independence.” Ibarra said the breakaway process “undermines the golden rule in any democracy based on the rule of law, which is that political order is founded on a government of laws, not on the will of those who are governing,” Europa Press reports. 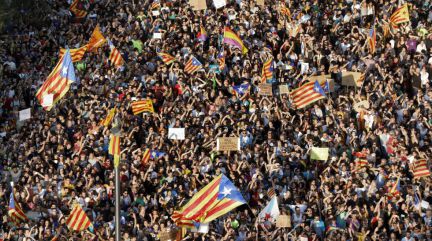 The Spanish Constitution cannot be torn up by the illegal and seditious acts of a tiny minority, Dublin-based lawyer Isabel Foley argues in this op-ed for EL PAÍS

Public prosecutor calling for Mossos chief Trapero to be held in custody without bail. High Court judge will have the final word, Fernando J. Pérez reports.

Trapero is facing charges of sedition for his role in the events of September, when the Civil Guard and National Police staged a series of raids aimed at seizing material to be used in the October 1 illegal referendum. 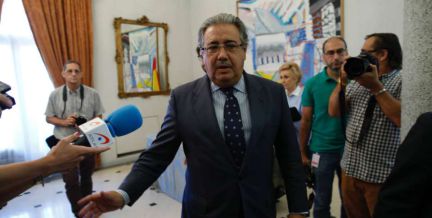 Interior Minister Juan Ignacio Zoido has refused to confirm whether or not his department will take control of the regional police force, the Mossos d’Esquadra, should the central government activate Article 155 of the Constitution and take control of Catalonia.

"Whatever we have to do, we will do," he said, according to the EFE news agency 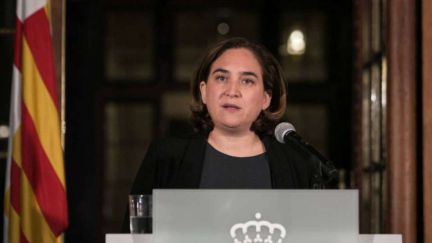 The mayor of Barcelona, Ada Colau, has called a meeting on Tuesday of business figures and social agents in the city to transmit a message of "confidence" in the face of the political crisis in the Catalonia region and the tension being generated by the conflict between the Spanish and Catalan governments, Clara Blanchar reports.

So far 540 companies have moved their legal headquarters out of Catalonia.

Anti-austerity party Podemos has accused the Popular Party and the main opposition Socialist Party (PSOE) of having previously agreed to implement Article 155 of the Constitution to suspend the self-government powers of Catalonia "whatever happened" and "whatever [regional premier Carles Puigdemont] said."

That's according to the party's organization secretary Pablo Echenique, speaking today at a press conference and when asked why Puigdemont had not given a clear response to Rajoy on whether he had declared independence

Rivera called for the Constitution to be observed, as it is "not optional, but rather an obligation because the blackmail of the regional government must be stopped." (EFE)

"Codorníu, to La Rioja. This is a second referendum. Business leaders have kept quiet all these years but they are voting with their feet and doing a disappearing act."

Another household name in Spain is moving its legal headquarters out of Catalonia. This time it's the holding company Unideco, from the Codorníu Raventós group, a major producer of Cava sparkling wine.

The company released a statement Monday saying the decision had been taken "given the situation of political and juridical uncertainty in Catalonia, and with the aim of guaranteeing the interests of its workers and customers," Lluís Pellicer reports. 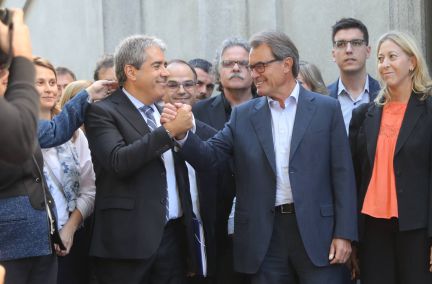 Former Catalan regional premier Artur Mas (pictured right) has posted a €2.2 million bond as part of the investigation into his role for organizing an unofficial independence referendum back in 2014. Mas has called on Spain's Court of Audit to extend the deadline to post the rest of the bond, which has been set at €5.2 million.

Here's a story from March this year explaining his ban from office:

Claudi Pérez reports: 'German government sees a "margin" to find a negotiated solution in Catalonia. German sources had to clarify: "Within the Constitution."'