A bit like Fight Club, the first rule of San Román is: you don’t talk about San Román. “I don’t know what you’re talking about,” says the filmmaker Jonás Trueba. “The what?” asks the cultural reporter César Suárez, pretending to be clueless. “No idea,” states the actress Lola Dueñas. The San Román, a bar so tiny that the Christmas tree hangs upside down from the ceiling, is one of the best-kept secrets of the Madrid night scene. 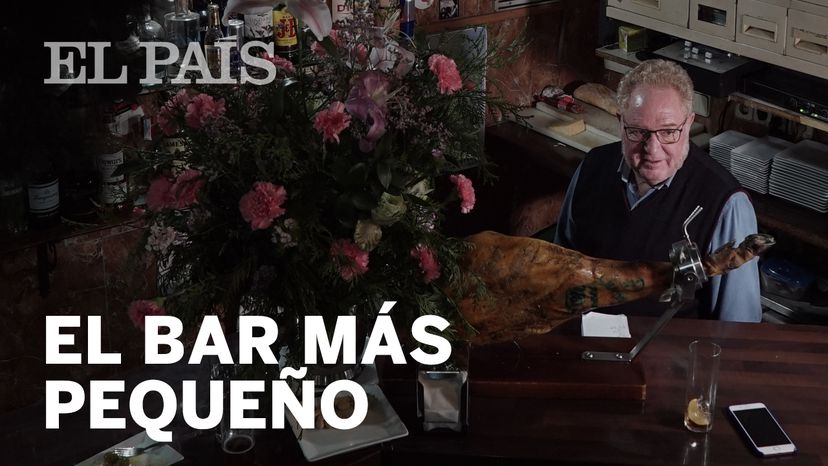 Located at Plaza Puerta Cerrada, 7, it is easy to miss the little place at first glance. It’s hidden in a poorly lit basement, behind black double doors made of iron. Visitors must descend down a flight of steps to get to the tiny V-shaped bar. To the right there is a coat rack, and to the left, the bathroom. There isn’t any more to see. That’s everything.

Behind a leg of ham and a disproportionately large flower vase there peeks the head of Vicente Romero, the 64-year-old owner of the bar. Every day, from the moment he opens the shutters to the time that they come rattling down once more – sometimes when the sun is already coming up – Romero plays flamenco at high volume. On a simple television set placed over a white filing cabinet, he loops DVDs from an old collection featuring the best flamenco singers in history. Sometimes, without warning and when the spirit moves him, he claps his hands to the beat. At times like these, the San Román lights up like magic.

One night a week, Rodrigo López, a 41-year-old lawyer, walks through the door. He’s been a patron since he was 19. He has just finished teaching a course at the Madrid Bar Association and it’s gone really well. He has been congratulated for a job well done, and he is here to celebrate in good company. Before saying another word, he orders a round of tequila for everyone present. “What happens here, stays here,” he says, and thus divulges the second rule of San Román. “I only come here with special people. To impress them. Right, Vicente?” he asks. “Right,” Vicente responds.

In this bar, which spans about 15 square meters and fits no more than 15 people, there’s no kitchen, obviously. But the owner, who is also the only employee, offers tapas and cold cuts of the highest quality, salmorejo, anchovies in vinegar, gourmet preserved seafood from the Galician brand Frinsa, and organic heirloom Raf tomatoes that “you couldn’t find even in the finest hotels in the world,” says Vicente. “This is a place for delicacies.”

The owner, at first, comes across as having something of an abrasive character, characteristic of the Andalusian mountain range where he was born. “Vicente is very selective with people. If someone comes in that is loud or rude, Vicente doesn’t hesitate to ask them to leave,” says César Suárez, the culture editor at Telva, a monthly women’s magazine based in Madrid.

And so we come to the third rule of San Román: don’t be rude.

And without delay, here is the fourth: show an interest in flamenco.

“Vicente is a connoisseur. He is what’s called a flamencoholic, because he’s not an orthodox flamenco expert but when you listen to flamenco 12 hours a day, you end up knowing and understanding it. He has very good taste. He’s met a bunch of guitarists and singers,” says Suárez.

It’s true, and he doesn’t hide it. Vincente passes the time with reflections on singing and destiny:

“I’ve met Morente, Enrique de Melchor, Tomatito and Moraíto Chico. Only Tomatito is still alive. The other three died of cancer. The sickness of flamenco is cancer.”

Sometimes he disappears through a trapdoor in the floor, where a storage room is hidden. The bar is left abandoned. But after a few minutes he rises through the floor and the clientele applauds.

“It’s a bit of a secret bar,” says Trueba, who shot his second movie here, Los Ilusos (The Wishful Thinkers). “Friendships are forged and important moments take place here. The people who come here are not poseurs. You know what time you are walking in, but not when you will leave.” This sentiment is echoed by Suárez, who characterizes the San Román as a “cave where time is suspended.” And so we arrive at the fifth rule: in San Román there are no clocks.

Vicente has fanciful ideas. He calls the bar Al Vicente Copas, but as it was originally called San Román, he uses both names. If he likes you and trusts you, he’ll give you a business card. One side is blue and says “Al Vicente Copas,” but the other side is red and says “San Román.” A tiny bar with two names.

The face of actress Lola Dueñas adorns the walls. “Vicente is my house, my home. My Madrid. In his bar there is always a mix of film, life, wine and food. I love my Vicente a lot,” writes Dueñas over WhatsApp, revealing the last unwritten rule of San Román: keep Vicente in your heart.