A 30-year-old fisherman died Sunday morning after falling into the sea while fishing in Sant Feliu de Guíxols, a municipality in Girona, in the northeastern region of Catalonia. Sergio L. B. is the seventh person to have been killed in the extreme storms that have been battering mainland Spain since Wednesday.

Two fishermen jumped into the water and tried unsuccessfully to save the victim. Three police officers also tried to help by throwing him a flotation device, but were also pulled into the water when a wave hit their vessel. The rescuers were taken to hospital with hypothermia.

On Saturday, a man died in his car after the vehicle was dragged away by the flooding in Huéscar, a municipality in Granada province, in the southern region of Andalusia. The driver was traveling along the road that connects Huéscar with Santiago de la Espado in Jaén, when he tried to ford the Raigadas River. He miscalculated the force and depth of the current, which was much greater due to the recent heavy rains, and was dragged away by the river. According to sources from the area, the victim was a farmer who was on his way to feed his animals.

There were three more victims on Friday. The Civil Guard recovered the body of a 67-year-old Dutch man from La Pota beach in Punta Umbría, a fishing village in the southern province of Huelva. The victim had died while windsurfing with another person. At the time of his death, the coast was on yellow alert for strong winds. The second windsurfer alerted emergency services, and tried to pull the victim out of the water. According to police sources, the victim lived in the area and had been staying at a nearby camping facility in Cristina Island.

A 32-year-old Korean woman was hit by an “ornamental decoration” that had blown off from a building in Alcalá street near the popular Puerta del Sol square in Madrid. She suffered a severe head injury, and died the following day. 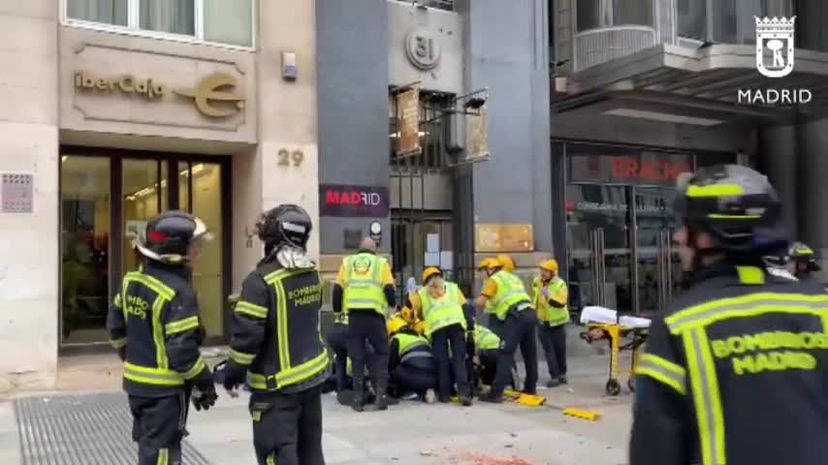 A woman was injured in Madrid after being hit by a piece of a building ledge (Spanish audio).(atlas)

And a 59-year-old man died in Vegas del Condado, in the central region of Castile and León, when he fell from his tractor into a river that had overflown due to the heavy rainfalls.

On Thursday, a person was killed in a landslide in Aller, a municipality in the northwestern region of Asturias, and the body of an 80-year-old man was recovered after a wall collapsed on him in Santiago de Compostela, in Galicia.

The extreme weather is the result of two storm systems: Elsa, which has been affecting Spain since Wednesday, and Fabien, which hit the peninsula over the weekend. On Sunday, around 60,000 homes were left without power in the northwestern region of Galicia due to the storms.

With reporting by Javier Arroyo and Margot Molina.