Spain’s National Police force arrested at least five British soccer fans on Saturday ahead of the Champion’s League final between Liverpool and Tottenham Hotspur, which was played at the Wanda Metropolitano stadium in the northeast of the capital. The day before, another five arrests were made. Apart from these isolated incidents, the weekend did, however, pass off without any major problems.

One of the persons detained on Saturday was accused of drug possession as well as assaulting a number of police officers on the way into the stadium, which is home to Atlético de Madrid soccer club. The National Police also reported having arrested a person who was trying to fly a drone over the Plaza Mayor, which hosted one of the fan zones organized for the final.

The other three people arrested on Saturday were part of a group located outside the stadium that tried to steal a video camera from a crew of journalists sent by Spanish TV channel La Sexta. Plain-clothes officers managed to immobilize the would-be thieves and immediately arrest them, much to the surprise of the Britons. While the officers were awaiting the arrival of two patrol cars, two mounted officers went after a man who had just stolen a ticket to the game from another fan. Two of the officers who had captured the camera thieves also went after him and managed to bring him down.

One of the most serious incidents of the weekend involved a Liverpool fan aged around 30, who was celebrating his team’s 2-0 victory in the final in Madrid’s central Puerta del Sol. He was arrested by the Madrid municipal police after he masturbated in public, as well as assaulting an Italian tourist and a number of officers. The exhibitionist was seen in cellphone footage standing naked on top of a fence and touching his genitals. The Italian tourist, meanwhile, reported to police that the same man had approached her and when she protested he dealt her a blow that knocked her to the ground. The victim had to be treated by an ambulance crew after she hit her head during the fall. 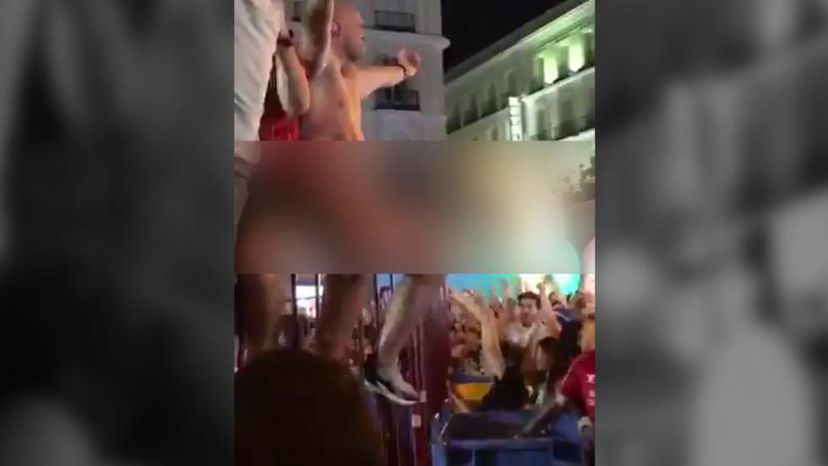 The moment when a Liverpool fan masturbated in Madrid’s Puerta del Sol.VIDEO: @KINGDEMBOUZ

When officers went to find the man in a nearby bar, he reacted violently and assaulted a number of police officers. Three of them needed medical attention, according to police sources. The man is now facing several different charges.

Another four Britons were arrested in the early hours of Saturday morning after incidents, some of which involved the police. Three were detained at the Alsacia Metro station, one for assaulting police officers and another two for resisting arrest. A fourth was detained in Jorge Juan street, near the Tottenham fan zone, an arrest that left a policeman with light injuries.

Five Britons were arrested on Friday afternoon, four of them Liverpool fans. A 32-year-old woman was accused of fraud for selling fake tickets to the game in the city center. According to police sources, the woman approached two men who were holding a sign stating that they were seeking tickets to the game. The alleged fraudster told them that she could sell them tickets for €8,400. They handed over the cash, but when she left they realized that the tickets were clearly fake. They managed to find her again and informed the police of what had happened. The municipal police arrested at least one other person outside the Wanda stadium for selling fake tickets.

The police operation ahead of the Champion’s League was the biggest ever put in place for a sporting event in Spain. More than 4,700 officers were due to participate, mostly from the National Police, along with their colleagues from the Civil Guard, the Madrid municipal police, fire and ambulance crews, and volunteers from the Red Cross.