In a day marked by calm, long lines outside polling stations, and a record high voter turnout of over 80%, the big winner was the constitutionalist party Ciudadanos.

Led by Inés Arrimadas, the party which has campaigned strongly against independence had, with 99% of the vote counted, won 37 seats in the 135-seat regional parliament – more than any other party – and picked up more than one million votes, making it the most-voted party in the region by a long margin. The result also gives the party a clear leadership position among the anti-independence forces in the region.

However, the success of Ciudadanos was not enough to put the brakes on the three pro-independence parties that governed from 2015 until October 27 of this year, when Madrid ousted them from power using emergency measures to stop the secessionist bid. The Catalan Republican Left (ERC), Junts per Catalunya and the radical left-wing party CUP won a combined 70 seats in the Catalan regional parliament – enough to form a majority government.

The ERC picked up 32 seats while Junts per Catalunya – the party of former premier Carles Puigdemont, who watched the results come in from Belgium where has been since the regional parliament passed a unilateral declaration of independence in late October – won 34 seats. The CUP won four seats.

The Catalan Socialists, led by Miguel Iceta won 17 seats, or one more than in the regional election of 2015.

That concludes our live blog for today. Thank you for reading. Check back with us tomorrow, Friday, as we continue to provide coverage of all the reactions and developments in Catalonia and the rest of Spain.

With 99.1% of the vote now counted, Ciudandos have claimed one more seat, bringing their total to 37.

The figures for the three pro-independence parties remain the same: Junts per Catalunya has 34, while the Republican Left of Catalonia (ERC) is still on 32 and the radical left-wing CUP have four seats. This is enought for the three parties to form a majority in the 135-seat regional parliament. 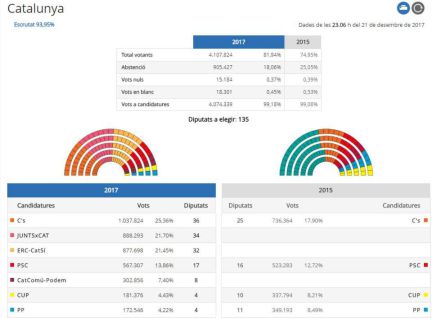 93,95% of the vote is counted and here is what the parliament looks like. 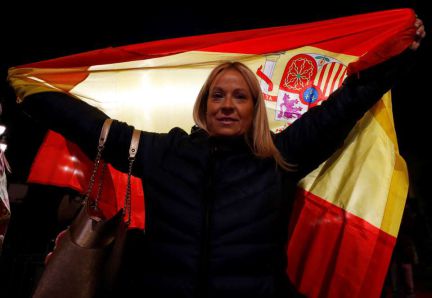 A Ciudadanos voter holds up a Spanish flag. The unionist party secured over a million votes at the Catalan election, outperforming all other parties.

The vote count is 89.91% and there is no change to the seat distribution. In terms of votes, however, the unionist Ciudadanos is close to securing a million votes.

Secessionist parties seem set to secure a collective 70 seats, two more than the required number for a majority, even though non-secessionist parties have a lead of nearly 5 percentage points in terms of votes. Reporting by Claudi Pérez. 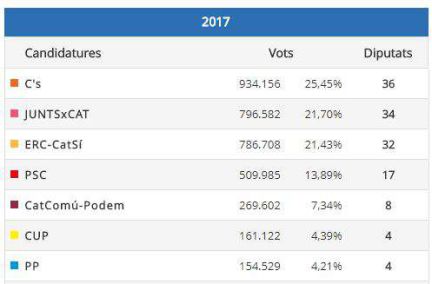 This is how things stand with over 84% of votes counted.

There are 400 reporters from 300 news organizations, including 56 foreign ones, covering the Catalan election. The world is watching the results closely.

On Friday, December 29, Spanish Prime Minister Mariano Rajoy will provide his traditional economic and political overview of the year and outline his expectations for 2018.

The Spanish Cabinet will sit down on Friday at its second-to-last meeting of the year to analyze the results of today’s election in Catalonia, as well as the outlook for the new Catalan parliament. Ministers will also discuss the subsequent negotiations that should lead to the naming of a new regional premier. 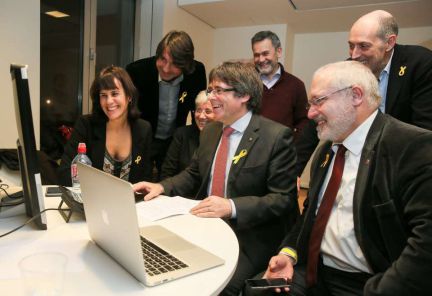 Ousted Catalan premier Carles Puigdemont, whose Junts per Catalunya is close on the heels of the unionist Ciudadanos, follows the results of the Catalan election from the Convention Center in Brussels. Photo credit: Stephanie Lecocq (EFE).

Record voter turnout: Participation in today’s Catalan election has reached a historic high of 81% with 52.3% of votes counted in a ballot marked by polarization. This is six percentage points more than in the Catalan election of 2015 and it is also a record for Spain, topping the 79.9% turnout at the Spanish general elections of 1982 won by the Socialists of Felipe González, EFE reports. 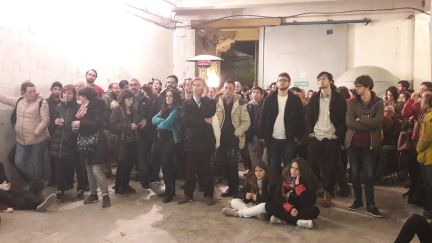 Serious faces among supporters of the far-left, pro-independence CUP party in Barcelona’s La Sagrera neighbourhood. They could lose 60% of their vote.

The count is up to 52.3%. Ciudadanos is winning with 35 seats, one more than JuntsxCat and three more than ERC. The far-left CUP and the conservative PP are in freefall, losing six and seven seats respectively. Ciudadanos is already 71,000 votes ahead of its nearest rival.

With 41.71% of votes counted, Ciudadanos and Junts per Catalunya are tied at 34 seats although Ciudadanos has 50,000 more votes than Puigdemont’s party. The Catalan Republican Left (ERC) gets 32. A coalition of all three separatist parties (ERC, JuntsxCat and CUP) would have 71 seats, three more than the 68 required for an absolute majority.

In the city of Barcelona, with 11.7% of votes counted, the unionist Ciudadanos is winning with 25.4% of the vote. The pro-independence Catalan Republican Left (ERC) is second with 20,2% and Junts per Catalunya with 17.2%. The Catalan Socialists are fourth with 15.4% and Barcelona Mayor Ada Colau’s Catalunya en Comú is in fifth position with 9.2%. The Popular Party (PP) gets 5.44%. Reporting by Clara Blanchar.

With 34% of votes counted, Puigdemont’s Junts per Catalunya gets the most seats in parliament even though it has 36,000 fewer votes than the unionist Ciudadanos. These are official figures at 21.53pm

With 15.52% of votes counted, the most voted party is the unionist Ciudadanos with 165,289 votes, around 9,000 more than JuntsxCat and nearly 20,000 more than the Catalan Republican Left (ERC). This does not necessarily translate into more seats in parliament, as more votes are required for seats representing Barcelona (where Ciudadanos is stronger) than for those representing other provinces, where support for pro-independence parties is higher.

With 7.77% of votes counted, the anti-independence Ciudadanos and the secessionist JuntsxCat both get 35 seats, two more than the Catalan Republican Left (ERC). These are official figures at 9.22pm.

The vote count is going very slow. In 2015 at this same time, twice as many ballots had been counted already – another sign that this is an atypical election.