The bulls from the Cádiz-based stockbreeder of Cebada Gago lived up to their own reputation on Friday morning, when they made history with one of the most dangerous San Fermín runs on record.

Six people were injured after being gored by a horn on the streets of Pamplona. The run was also particularly long: the last animal entered the corral a full five minutes and 45 seconds after the beginning of the race.

Friday’s encierro was also disconcerting because the herd broke up just as it entered Mercaderes street and each bull then went its own way, catching many runners by surprise just as they thought the danger had passed.

The non-skid surface on the cobblestone streets did not prevent one bull from slipping and skidding into the side fence, where dozens of people were viewing the run from what they had thought to be a safe distance. 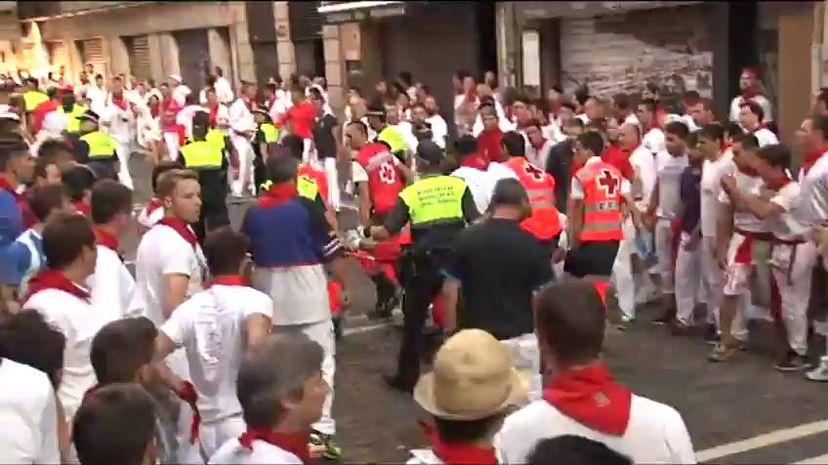 The second Running of the BullsATLAS (atlas)

That is when the war began. Just a few meters from there, a bull decided to focus its anger on two specific runners who were unintentionally saved by a second animal who faced off with the first, providing a moment of distraction.

Estafeta street became a battleground from that point on. With the herd in tatters, it was each bull for itself as the bullocks that are sent along to guide them became lost in the mêlée. There were high doses of tension, jostling, horns hitting flesh, and people running for their lives as the animals contributed new material to the fearsome history of the Cebada Gago.

Many runners found themselves flying through the air, although it is hard to ascertain what is worse: getting caught by a bull or landing hard against the pavement, especially when not all runners have trained their bodies for this kind of war.

When the first bull finally made it into the ring, several herders were still trying to drive two other animals forward after the latter decided to head the other way in search of scared prey.

The run eventually ended, but the fear will remain for much longer. And it’s no wonder. The bulls of Cebada Gago played by their own law: the law of danger.