Last week, the sighting of a blue shark forced the evacuation of a beach in Benidorm, eastern Spain. Around two meters long and weighing in at about 60 kilos, the shark had become disoriented and ended up in an area full of bathers. A rescue team from the Oceanogràfic of Valencia oceanarium managed to capture it and, after running tests, found it to be in good health and returned it to the sea. On Saturday, August 21, the same specimen was located in the municipality of El Campello, 30 kilometers south, where the following day, it washed up dead. According to the necropsy carried out by Jaime Penadés, a researcher at the Marine Zoology Unit at Valencia University, the cause of death appears to have been a small wound near its eyelid, which was already visible in videos recorded several days before by the local police’s Maritime Service; a wound that is compatible with a swordfish attack. Until recently, this type of aggression was a complete mystery to scientists, but a spate of cases has prompted research into the relationship between the two marine animals.

The first scientifically recorded case of a shark being fatally attacked by a swordfish occurred in Valencia in 2016. The specimen was found dying on a nearby beach. Subsequent tests revealed an 18-centimeter fragment of a swordfish blade embedded in its brain. “The sword completely pierced and split the shark’s brain in two,” explains Penadés, co-author of a subsequent paper, Aggressive interactions between juvenile swordfishes and blue sharks in the Western Mediterranean: a widespread phenomenon? “We were amazed at the time. We didn’t expect to find anything like it.” That first recorded case was a wake-up call to the scientific community to check if there were more signs of this type of attack. Since then, similar reports documenting encounters have been published in Italy and Libya.

By June 2019, Penadés’ team had managed to document another five assaults. New cases have since been discovered and will be documented soon. All the impalements follow a familiar pattern. “The attacks are made to the head, so the swordfish is acting with intention,” says Penadés. “It is not a random attack. It is also very accurate because it goes to the eyes or the brain, which are vital structures.”

Due to the limited data available, it is difficult to know if attacks to other areas of the body are common. The researchers are also unsure whether it is a proactive aggression by the swordfish or one made in self-defense, although Penadés suspects that, due to their smaller size, it is likely that the swordfish is seeking to defend itself. 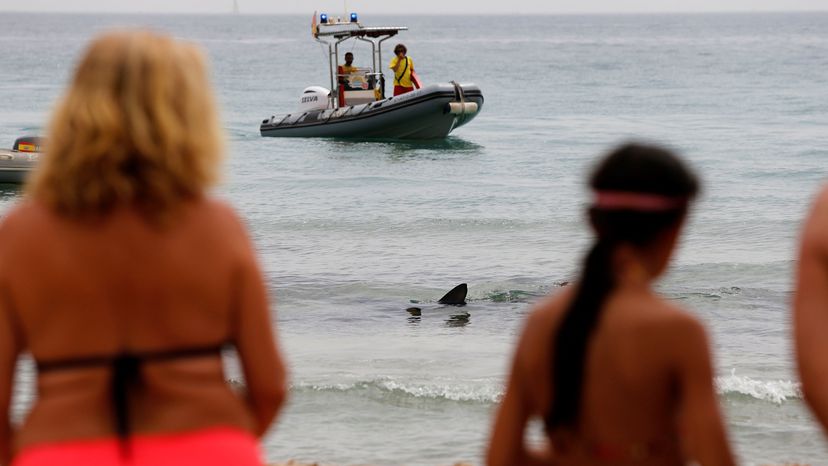 The main obstacle when it comes to finding more examples of these attacks lies in the fact that sharks do not float. “It is very difficult for a shark to end up stranded,” says Penadés. “It’s easier with dolphins because they float, but sharks usually sink.” There is also the fact that the tests needed to detect the fragments of a swordfish’s blade are not run routinely. “Normally, in a necropsy, cerebrospinal fluid is removed, but the skull is not opened and a complete dissection is not performed,” says Penadés.

Fortunately for the researchers, the Valencian Community Beaching Network has records of specimens found in the region’s waters, allowing them to review their physical condition on arrival. “We have been able to look back and see sharks with similar injuries – ones we weren’t sure where they’d come from,” says Penadés. With the help of the Oceanogràfic Foundation they were able to carry out several CAT scans and X-rays. “We discovered a shark that had a fragment of sword inside its skull but had already healed; it was an animal that had survived the swordfish attack,” he says.

The reason this type of aggression is being more frequently detected could be because, until now, nobody has been looking out for it, as Penadés points out. However, he also believes there could be something triggering the attacks, such as global warming, though he admits there is currently no data to confirm this. “We are all very quick to mention climate change nowadays, which is certainly a reality,” he says. “But in this case, I think it’s more likely to be due to the fact we didn’t take it into account as a possibility; we weren’t even checking for it.”

Science has recorded numerous cases of turtles, whales and small boats impaled by swordfish. The tips of swordfish blades have even been found stuck in the floats used for anti-submarine mines popular during the Second World War. But confrontations between swordfish and sharks only ever appeared in storybooks; until now. “Traditional knowledge tells us that fishermen had already encountered sharks with their heads impaled by a sword,” says Penadés. “Scientists are lagging far behind popular knowledge; sometimes we have to get closer to the fishermen.”

But Àlex Bartolí, a biologist with the marine biodiversity conservation organization SUBMON, disagrees. In his opinion, these attacks are coincidental and occur during hunting. “Where there are schools of fish, all the predators are trying to catch what they can,” he says. “The swordfish go around swinging their sword to hit the small fish which, once stunned, will be eaten. In this maelstrom, the predators pass by at high speed and I think there are collisions.”

According to Bartolí, there is little motive for an attack; sharks and swordfish do not fight over the same habitat, as they are migratory species; they would not attack to defend their young, since their maternal duties end once they lay their eggs; neither does he see the sense of an attack in which one animal sees the other as prey. “The energy required for a shark to attack a large animal means there’s no point in it,” he says. Still, he admits he may be wrong, as the sample of encounters is still small. “I think it is a hypothesis that is still to be proven; from here on, we will have to contrast evidence, but until there are more cases, I find it hard to imagine a fight between a blue shark and a swordfish.” For now, the mystery is yet to be resolved.