The creator of the antivirus software company McAfee, John McAfee, was found dead on Wednesday inside his cell in the Barcelona prison Brians 2, located in Sant Esteve de Sesrovires. On the morning of that same day, he learned that Spain’s High Court, the Audiencia Nacional, had approved his extradition to the United States, according to prison sources.

The court’s decision could have been appealed and the maximum sentence McAfee was facing for tax evasion charges in the US was five years in prison, according to the court document. At 6pm, prison workers found McAfee hanging from his cell. Police suspect the 75-year-old committed suicide.

McAfee had been in the Barcelona prison for nearly nine months. He was sent there on October 4, 2020, when he was arrested by the National Police after US prosecutors accused McAfee of tax evasion. During these months, McAfee’s behavior was exemplary, according to sources from the penitentiary. He didn’t cause any problems nor received any disciplinary action. These sources described him as “a financial crimes prisoner with an absolutely normal life.”

McAfee had not shown any suicidal behavior, meaning there was no specific prevention protocol applied to him, according to sources from the prison. This point has not been confirmed by the Justice Department. Inmates who show suicidal tendencies must be accompanied 24 hours a day by another prisoner to prevent a possible suicide attempt. In the case of McAfee, he shared a cell with one other person, but they were not always together.

On Wednesday morning, McAfee was notified of the High Court’s decision to approve his extradition to the US, where he was wanted for tax evasion between 2016 and 2018. The Spanish court did not consider any of McAfee’s pleas, which mainly involved insisting that he was being “politically persecuted” for his “activism” against the US tax system, which he considered to be corrupt. “There is no supporting evidence that such a thing could be happening,” the High Court ruled, maintaining that the “internal motivations” for why McAfee did not declare his taxes during that period did not matter.

The Spanish tribunal insisted that there was no “evident link” that McAfee’s activism as a candidate in the US primaries for a “politically radical and very marginal party, according to his words,” had motivated the tax charges against him. This was a reference to McAfee’s bid to run as the presidential candidate of the Libertarian Party in 2015. The court added that “there was no sign” of the risk or danger he posed to the United States: “It is more to do with subjective convictions and allegedly exculpatory justifications that have no solid base in reality.” The country’s top court underscored that the software entrepreneur’s “importance socially, economically or in any other area” did not “give him immunity.” 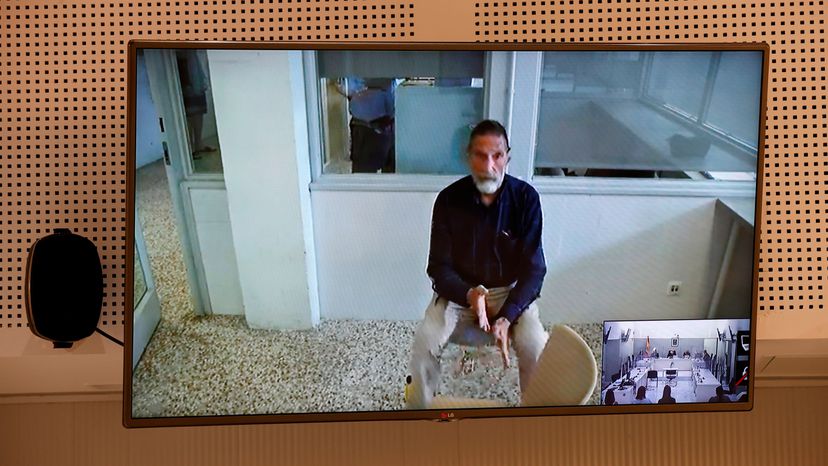 John McAfee, creator of McAfee antivirus software is seen on a screen while testifying via video during an extradition hearing on June 15.(PHOTO: AP | VIDEO: EFE)

Nor did the judges accept McAfee’s bid to avoid deportation for “humanitarian reasons.” The 75-year-old said that if he were to be sent to the US, he would spend the rest of his life behind bars in what would essentially amount to a life sentence. McAfee also claimed he was in delicate health. But the court knocked back both arguments. In the first case, it pointed out that the US had “set a maximum of five years” as the length of the prison sentence he was facing. “This is not life imprisonment, even in the case most unfavorable to his interests,” it found. And in the second case, the court said it did not see that McAfee was suffering from “serious health problems” – an issue that would at any rate only be taken into account “at the moment that the extradition is carried out.”

With the news of the court’s decision in his hand, McAfee asked at 4pm to spend some time in his cell, which he shared with another inmate. This is a right that prisoners have when they do not have any activities in the afternoon, according to prison sources. The antivirus software creator remained alone in his cell. These same sources say the person who shared his cell was not with him. Just after 6pm, when prison workers came to the cell, they found him hanging.

“We were the first to be surprised,” said the prison workers. The 75-year-old’s body is now awaiting an autopsy to determine the cause of death. The Catalan police force, the Mossos d’Esquadra, are treating the death as a suicide and have not found any sign of a crime, according to police sources. The Catalan health department also says that “everything indicates that it could be a case of death by suicide.”

McAfee’s lawyer, Javier Villalba, told the news agency Reuters that suicide was the cause of death. “This is the result of a cruel system that had no reason to keep this man in jail for so long,” he said. An investigative court in Martorell is seeing the case.