Chris Stewart is taking a year off from writing, and it’s all the fault of the wild boars. For the last 27 years, the Driving Over Lemons author has been immersed in a never-ending task: converting El Valero, the isolated homestead lacking running water and light that he bought in Granada’s Alpujarra mountains, into what he calls “a private paradise.”

I’m really only a local optimist. I’m very pessimistic about the global state of things”

With his sense of humor as his main survival tool, this latter-day Gerald Brenan – the Englishman who wrote about his own experiences living in the area in the 1920s – has learned to build dry stone walls and makeshift bridges, find water sources, produce solar energy, farm, learn about domestic and wild animals, as well as rub along with the locals. He’s also established himself as an international best-selling author, with two million readers who have followed his account of converting an inhospitable, run-down house into an oasis, a process that has made him a very happy man.

Stewart found unexpected literary fame in 1999 after the publication in the United Kingdom of Driving Over Lemons, sales of which were initially helped by the author’s association with 1970s rock band Genesis (Stewart had briefly been its first drummer). Subtitled An Optimist in Andalusia, the book caught the British public’s imagination both for its descriptions of the hapless Brit abroad, as well as the wily locals: “The idea is not to take things too seriously,” says Stewart.

Last summer, Stewart finished the fourth title in his Alpujarras series, Last Days of the Bus Club, which has recently been published in Spanish and deals with his daughter’s departure for university, leaving him and his wife Ana alone at El Valero. And now they have decided to take a year off from writing to deal with mounting problems on the property. El Valero was increasingly under siege from wild boars, “those agents of chaos,” and they needed to find a way of stopping them from destroying all their produce. The couple grow fruit and vegetables on the farm, and also keep a few chickens and lambs, helping reduce their shopping bill.

Chris Stewart was one of five students at Charterhouse public school who formed a band that would later morph into Genesis, one of the world"s biggest-selling groups. In reality, his involvement was minimal, and he is only credited with playing on one song, The Silent Sun, which featured on Genesis"s debut album, before he was invited to leave and replaced by another drummer.

He’s always defended his band mates’ decision, but says he’s never listened to any of Genesis’s records. “Partly out of spite, and partly because they made music for snobs. They sent me the complete works, but I still haven’t opened the package. Maybe some day…” Stewart has long since given up the drums, but says he has become an enthusiastic, if not overly gifted, guitarist.

He was recently given a photograph of the earliest incarnation of Genesis. “That’s me, frowning, on the end, next to Peter Gabriel,” he says.

Local tradition, which Stewart respects, establishes that before spending any money on building something, it is better to try to “use whatever is at hand, or growing nearby, and to use it in more or less ordered fashion,” he explains. And as El Valero is surrounded by cane, Stewart is using it to create a natural barrier to keep the boars out by winding it around metal bars. “That should stop them,” he says.

Stewart is now 65 and describes himself as a retired sheep shearer, the only activity he claims to have any skill at. Before making a living from his writing, he spent two months a year in Sweden “shaving” around 200 sheep a day. “I earned a lot of money and it was the only way to keep us going. We had tried to make a living selling lambs, but the buyers ripped us off.”

He now limits his shearing to helping out friends like Bernardo, who quit his job as a teacher in the Netherlands after nine months back in the 1980s and moved to the Alpujarras, where he restores old farm houses and rents them out. Stewart describes him as an inspiration. “Bernardo is a literary gift, he’s always got some great stories to tell.”

While Chris skillfully shears his three sheep, Bernardo shares his latest story: “I was just slaughtering some rabbits, and went to the car to get the last, which was hiding under the seats. I closed the door so it wouldn’t escape, and locked myself in. I couldn’t open the door, I was shouting, but nobody could hear me. Finally, I found a screwdriver…”

“It’s a really nice story, but it could be improved,” says Stewart.

“Well, the sun was beating down on the car and you’re trapped inside surrounded by dead rabbits…”

The two collapse laughing. “The truth is that I’m not able to make up stories, but I can embellish them,” says Stewart, gathering up the wool that Bernardo doesn’t want. It’s for his vegetable plot. “It keeps the soil moist, provides nitrogen, and gives the soil texture,” he explains.

For the moment, Stewart doesn’t need to collect Bernardo’s anecdotes. “There are so many stories in this place. Anyway, the new book is going to be different. You have to change. I want this one to be about farming, which is something I’m really passionate about.”

But the next book is still a long way off. Before his sabbatical ends, Stewart wants to travel to China with wife Ana to see their daughter Chloé, who is working there as a translator. Chloé is a central character in Stewart’s saga of life in Spain, which features a detailed account of her childhood, though she claims never to have read any of the books. 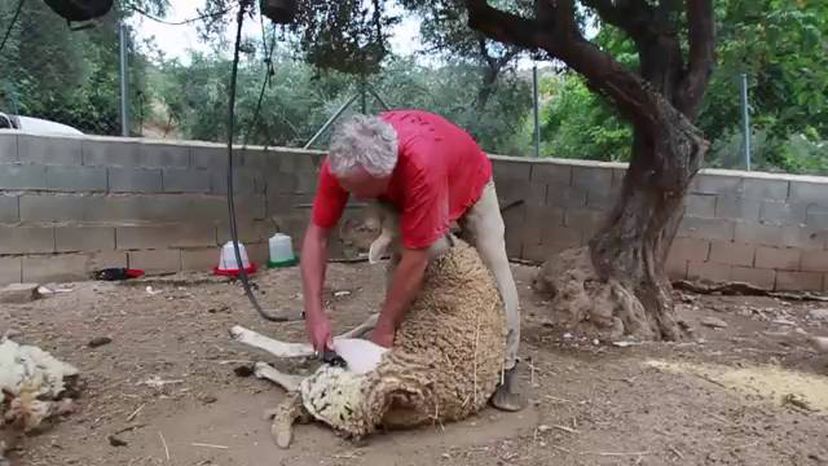 Video: Chris Stewart uses his electric shears on a sheep.

The couple, who rarely leave their farm and can spend days without seeing another creature on two legs, are a little worried about their trip to China. “Chloé lives on the 17th floor of an apartment building, surrounded by skyscrapers and facing a huge neon sign that is constantly changing color,” says Ana, fearfully. “I think we’ll only be able to manage a couple of days in the city and then we’ll have to head to the countryside,” says Stewart.

Stewart accepts his status as a guiri, the typical clueless foreigner, noting: “You can take an Englishman out of England, but you can’t take England of the Englishman.” At the same time, he says that incomers from abroad like himself have done a lot for the Alpujarras. “I am part of a movement that has benefited the environment. When we arrived, this area was stagnating.”

He introduced the first electric sheep shears into the area, and had to overcome the doubts of local farmers who thought the device would electrocute their animals. “But I say it humbly, because they have enriched me infinitely more.” Among the many local people he says he is indebted to is his neighbor Matías (Domingo in the books): “The most naturally intelligent bloke I have ever met,” he says. “Another literary gift.”

Matías has helped him eight times to rebuild the footbridge over the narrow ravine that separates their two properties and can turn into a raging torrent every time it rains. “The first seven times we did it the local way, using whatever came to hand. As they say round here: ‘what’s in the river is the river’s.’ But finally we decided to invest a thousand euros on concrete and steel. And this bridge has stood up to the tremendous forces the water can unleash, carrying boulders down. But it’s a shame, because there is nothing as satisfying as building a bridge with Domingo.”

Looking forward to your bridge being washed away so you can rebuild it very much reflects Stewart’s philosophy, which tends to see the positive side of things. “But I’m really only a local optimist. I’m very pessimistic about the global state of things.”

For the first time during our conversation his smile fades as he discusses global warming: “It will make this area uninhabitable within half a century.” He is deeply worried about corruption, the Catholic Church, bureaucracy, civil servants… “In short, I’m a radical socialist, but I have to admit that capitalism has given me an incomparable life.” And with that, he’s smiling once again.

Órgiva, the capital of the Alpujarras, has lost around a third of its population over the last half century, as local people head to the cities in search of work. But new arrivals, mostly from abroad, are helping to keep numbers up, and now make up around a quarter of the 6,000 population. In total, there are 53 nationalities, with the British making up almost half. They have come in different waves, some seeking to make a new life in the 1980s, and others encouraged by Stewart"s books, which in 2000 sent local property prices soaring.

“There has been renewed interest over the last 18 months,” says Paul McJury of real estate company Orgiva Properties. “I have people from all over Europe who are prepared to spend up to €200,000 on a small farm with land and decent views, but the problem is that there aren’t enough properties.”

But it"s not just older north Europeans looking to escape to the hills and live off a pension or savings who are attracted to the Alpujarras. "You have to distinguish between guiris and immigrants," says José Jesús García Aragón, who heads the area"s regional development agency. "Some come here to spend money, and others to make money."

Growing numbers of incomers want to develop intensive agriculture of the kind found in nearby Almería province, and that involves putting large areas of land under plastic-sheeted greenhouses, thus spoiling the spectacular views that attract so many other people here.