The voice of the coyote, or people smuggler, floats above the Rio Grande ahead of the rubber dinghy carrying him and a dozen Central American migrants. The raft gently bounces against the riverbank of Roma, Texas. They have arrived in the United States.

It’s just before 9pm and the sky has turned gray, blending into the color of the river and clouds. It’s hard to make out his face as he tells the huddled group to prepare to disembark. “We are now on the American side. Everybody together and please help the kids first…,” he says. Before they step onto US soil, the coyote pulls out a cellphone and makes a call: “these are the last 13 of Code Parakeet,” he says, signaling to his bosses they have made it, are alive and his responsibility to them is over.

The US Customs and Border Protection (CBP) agents watch resignedly from less than two meters away through night vision goggles. They are not expecting to use force, as migrants usually turn themselves in as soon as they can with hopes of being allowed to remain in the country. Their flow has steadily increased over the last month, with hundreds arriving at pinch points like this.

Sunset marks the beginning of the river crossings on the other side of the Rio Grande, also known as the Río Bravo in Mexico. Last March more migrants crossed than in any other month in the last 15 years, and in total 171,000 people arrived at the southern border of the United States, according to provisional US government figures. Around 11% are minors who make the journey alone, a group that is growing in size as the Biden administration shifts the Trump-era policy on child migrants. Here in Roma, one of the busiest points along the border that snakes along the Rio Grande, up to 50 small boats cross every night without fail. On one Tuesday in March, 216 people arrived in three hours.

“How many are left?” an officer with the Texas State Police asks one of the coyotes in Spanish. “Twenty-six left and I’m done,” the voice replies, as he heads back in the direction of Ciudad Miguel Alemán on the Mexican side. The migrants already on US soil stand with tired smiles, slightly bewildered. They are joined by more and more people, and no one knows what to do, or to expect.

A Salvadoran girl approaches an EL PAÍS journalist. “Can I go with you please, because my daddy has a gun,” she says. Her mother, Saida Yolani, carries her and smiles apologetically. “His father is in jail and will be out soon,” she says. “I have all the time in the world to answer their [immigration agents] questions and prove that he wants to hurt us, because I don’t want to be with him anymore,” she tells this newspaper. “He became a gang member with the Mara 18,” she adds.

Originally from Ahuachapan, in eastern El Salvador, Yolani has spent a year fleeing gang violence. Members of the Mara 18, also known as the 18th Street gang, send her death threats through her former sister-in-law. She hid out in Guatemala until they found her, then traveled north to Veracruz, Mexico, where she stayed in a migrant shelter. Despite putting 1,000 kilometers between herself and her former partner, it was not enough. The death threats still found her and her only luggage now is a WhatsApp chat laden with menace.

More than 120 people accompany Yolani and her daughter into the night in Roma, but the group is soon held back by the flashlights of US agents. Although most of the people crossing the border are single adults, who are expelled almost immediately, the faces tracked by torchlight skew young. The rate at which thousands of unaccompanied minors are arriving is accelerating, creating a new challenge for the Biden administration. Their numbers reflect the shift in policy by the new US government, which prevents minors from being deported straight away. Dozens of adult men and women carry infants in their arms, hoping against hope that their children will unlock access to the United States.

The United States fiscal year runs from October to September, and 2020-2021 is set to break recent records. In the last six months, 47,729 unaccompanied minors have entered the United States, a figure that exceeds the total arrivals in 2020 and represents half the number of admissions of unaccompanied children and adolescents in 2019 (80,634). In March, there were 18,800 – the highest since May 2019, when 11,861 children were processed under the previous administration. Former US president Barack Obama dealt with the arrival of nearly 70,000 unaccompanied youth in his eight years in office.

The State Department told EL PAÍS that the US government “is committed to a safe, orderly and humane migration process.” One of the planks of the Biden migration policy is specifically aimed at reuniting the 600 to 700 children separated from their parents upon arrival in the United States by the Trump administration. Biden made a series of executive orders in early February on immigration, and Alejandro Mayorkas, the US secretary of homeland security, affirmed in March the policy of removing all unaccompanied minors under the age of 18 was over. 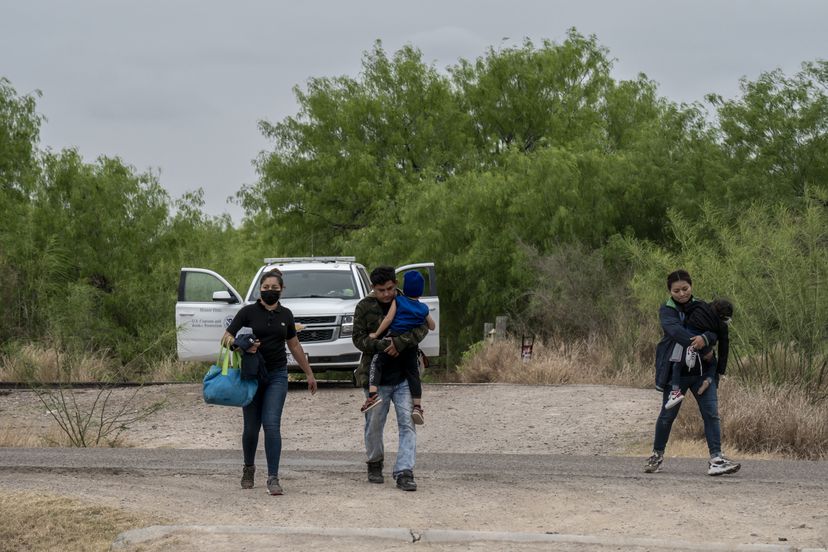 A family walks down a rural track in La Joya, Texas. In the video, migrant families cross the Rio Grande before handing themselves over to immigration officials.HECTOR GUERRERO

The clarion call of these executive orders was heard far and wide, and many have taken their chances without knowing if and how they will succeed. “Drink some water Mommy!” pleads seven-year-old Elizabeth, addressing her mother Leticia as she massages her belly on the riverbank, well into her third trimester. “The baby won’t move, I need to see a doctor,” Leticia begs the agents. She begins to retch through desperate tears and the Texan police call an ambulance. Leticia, who does not give her last name, fled Santa Rosa de Lima in El Salvador after her mother was murdered. “I can’t go back. I am in great danger,” she explains. She was kidnapped in Mexico before she made it across the border, she says, and was kept inside for a month. “I was able to get out because God helped me.” An hour later, the paramedics arrive and check her over. US Customs and Border Protection later told EL PAÍS that mother and unborn baby were out of danger.

Until February, four out of 10 immigrant families were promptly returned home within 72 hours, and the return rate was even higher for adults who arrived alone. Immigration lawyer Jasmin Singh believes the situation has changed because the coyotes are spreading a message that Biden has opened up the United States to migrants. “That is not true, but it is what has been communicated in towns in Honduras and El Salvador, in areas hard hit by violence and the economic crisis caused by Covid-19,” she says. Thousands of desperate parents now entrust the coyotes with their children’s lives. A State Department spokesperson tells EL PAÍS: “Collaboration is key to addressing the flow of Mexicans and Central Americans, who make up the majority of those crossing illegally into the US.”

Back in Roma, 37 unaccompanied minors, many of them teenagers, are separated into a group. Another line is filled by 91 people, almost all carrying a baby or toddler. The US agents order them to put their phones and personal belongings in a transparent plastic bag, and another long journey begins.

A white bus transports them to CBP detention centers, though the minors are supposed to be sent on to facilities run by the US Department of Health and Human Services (HHS) within 72 hours. The CBP centers have become the object of controversy after images of overcrowding were released by Democratic lawmaker Henry Cuellar showing children crammed into “pods” divided by plastic sheeting. Cueller represents the border town of Laredo, Texas and described “terrible conditions for the children” at the processing center in Donna, Texas.

A group of 19 Republican senators, including Texans John Cornyn and Ted Cruz, also visited the CBP facility on March 26. During the tour, the senators claimed to have seen overcrowded conditions in the temporary buildings and hundreds of minors in cages. Cruz was keen to exploit scenes similar to those that drew the ire of Democrats during the Trump administration. Cruz said Biden’s “open door policies” had created a “public health threat and a national security crisis never before seen,” telling Fox News: “It is inhumane, it is unconscionable, and it is the direct result of the political decisions that Joe Biden has made.” The visits forced the administration to allow an Associated Press camera to photograph conditions at the center.

Donna’s temporary facility was opened in February while work was underway at the city’s McAllen detention facility. As of the middle of last week, the site held 3,400 unaccompanied minors. Some spaces in the complex held more than 500 people despite health protocols recommending a maximum of 32. Authorities have admitted that 14% of the children being held there have tested positive for the coronavirus. Our own tour outside the heavily guarded facilities revealed a large team of workers is working to increase the capacity of the Donna center. The migration wave is not expected to subside any time soon.

Some get lucky, like Yuri Andrad, 24, who was allowed to remain on US soil. Like most of those detained on the border, this Honduran mother was briefly held in a detention center. “On Monday they threw me in the hielera [ice box, slang for the strongly air-conditioned detention centers] and on Tuesday, God appeared,” she says. She and her five-year-old daughter, who paid $6,000 (€5,040) to a coyote to get to the US, were the last in a huge line boarding a US Immigration and Customs Enforcement’s (ICE) flight bound for Central America. Finally, there was not enough room for them.

We met Andrade and her daughter, Rosy Careli, in Brownsville, a city 180 kilometers from Roma at the mouth of the Gulf of Mexico. They were transferred there from one of the detention centers in Texas; she does not know which one. Her husband was waiting for them in Dallas. “I haven’t heard anything from my fellow travelers. There is only one other person here who came with us,” she says at the bus station. In a few weeks, she will have to appear before a judge to argue her case and avoid being sent back to Honduras. If she doesn’t show up, she will join the millions of immigrants living without their papers and working illegally in the United States. Little Rosy Careli sports butterfly wings given to her by someone at the bus station, and draws quietly with her crayons. “My little girl is happy. It’s a miracle,” says her mother.

CULTUREEdel Rodriguez, the anti-Trump artist: ‘I never draw anything that isn’t true’
DRUG VIOLENCEDodging bullets in Fresnillo, Mexico’s city of fear
IMMIGRATIONCentral Americans’ hopes for Biden end at the Mexico-US border
IMMIGRATIONMexico braces for new immigrant crisis on US border