The phone inside Room 101 rings three times before Michael picks up:

— Hello. How are things in there?

— Normal, quiet. I’m in my room all day, eating and watching TV. It’s a bit boring.

Michael should have flown back to England yesterday after a few weeks of vacation time in Tenerife, the biggest of Spain’s Canary Islands. But his hotel, the H10 Costa Adeje Palace – a resort with a mushroom-shaped pool in the middle of the garden – has been locked down by authorities after one of the guests, an Italian doctor, tested positive for the Covid-19 coronavirus on Monday. His wife has also tested positive.

Trapped inside the hotel are 800 guests from 25 countries and around 200 workers. Like Michael, they are killing time as best they can. 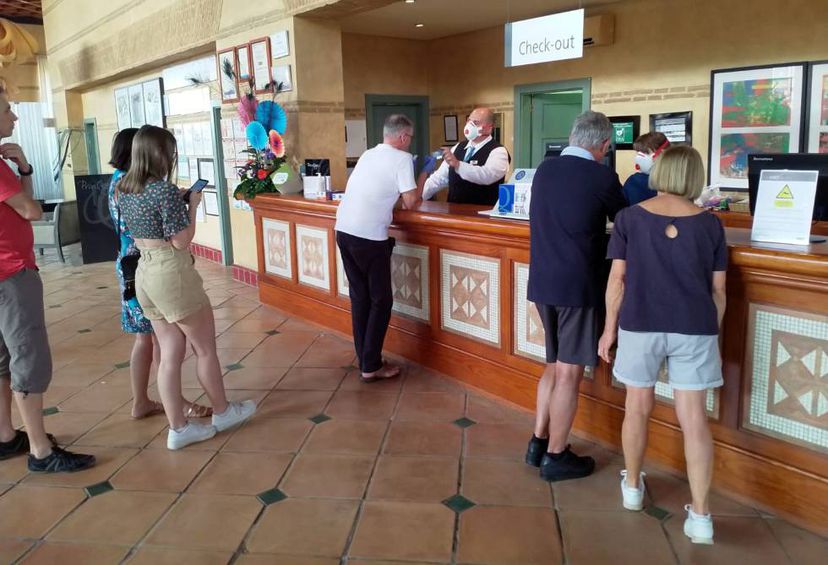 Footage from inside the H10 Costa Adeje Palace.

The hotel is located by a road and surrounded by villas and beach bars. Two security perimeters have been created around it; the outer one is guarded by the local police, and the inner one by the National Police. Within this smaller area, medical personnel have set up a field hospital to treat any potential patients, should anyone inside the hotel develop symptoms of the coronavirus.

Near the hotel, it’s business as usual. The only sign that something out of the ordinary is happening is the fact that all the people who work in the area – taxi drivers, police officers, waiters – are wearing face masks. Tourists on their way to the beach seem entirely unconcerned. If the Apocalypse is lurking behind the walls of that nearby hotel, it will catch them in flip-flops.

The staff members who were not at the hotel when authorities locked it down showed up for work on Tuesday regardless. Doctors conducted various tests, and since none of them showed any symptoms, they were told to go home until further notice.

Most of the guests prefer to stay in their rooms, although the boldest ones have been down to the pool and even the bar

“All of them have signed a document pledging not to leave their homes for the next two weeks. There will be nobody to watch them, but they have a commitment to society and I am sure they will honor it,” said Ruth Giménez, the union leader representing the hotel staff.

Most of the guests are opting to stay in their rooms, although the boldest ones have been down to the pool and even the bar. There is a catering service, courtesy of a nearby hotel that is also part of the H10 chain. At mid-afternoon on Tuesday, a refrigerator truck crossed both perimeters to deliver food. Inside the hotel lobby, 3,000 face masks and 300 pairs of latex gloves were also handed out for protection. A safety distance of no less than five meters is kept between outside visitors and people in the hotel, according to security personnel.

Relatives of the hotel employees were seen coming and going all afternoon, bringing clothes, toiletries and iPads. None of them seemed particularly alarmed. The explanations provided by the authorities have convinced them that the situation is under control, even though the Italian couple who tested positive may have spread the virus during their one-week stay.

Felipe, whose wife Ruth María works as a waitress at the hotel, showed up with a travel bag. “My wife is an athlete. She runs half marathons,” said Felipe, who left their 11-year-old son at home. “I understand that this mostly affects elderly people and those with health problems. But my wife is strong as an ox.”

A Belgian couple on bicycles showed up next and asked the police to let them through. The man, who was clearly in his seventies, took off his helmet and explained that they live in a little house right next to the hotel. The coronavirus may have struck fear into the hearts of millions, but he kept right on smiling: “We are very happy. We trust the Spanish government.”